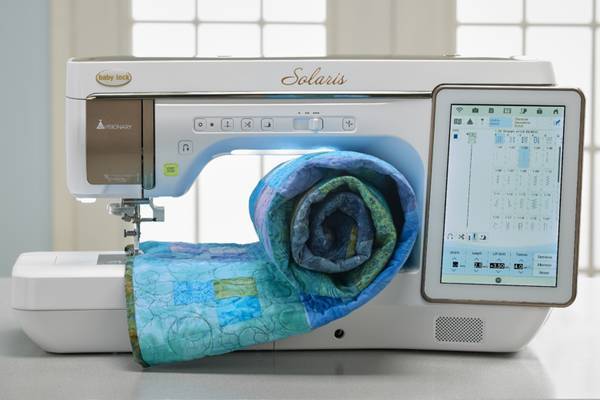 It must be the greatest mystery on earth. When a company doesn’t allow reviewers to mention the price of their product, you know you are in trouble. We have searched several sites, including the company’s website and no price has been given. One reviewer is allowed to email the price only.

Top learn more about the Baby Lock Solaris sewing machine just continue to read our article. While the price maybe a mystery, the features and functions are not. This machine is filled with up to date technology to make your more creative in your sewing projects

What Comes With the Babylock Solaris

Technology and the Babylock company has out did themselves when they built this top sewing machine. The first feature that you may notice right off is its approx. 10” touchscreen. This touchscreen gives you control over stitches, embroidery designs, colors, placement and more.

Your results depend on your fingertip or the special pen that is used to handle your selections. There are also, 861 built-in stitches, an IQ visionary function, 527 decorative stitches, 31 fonts and 740 embroidery designs.

But that is not all as you get a 11 by 16 inc approx., embroidery hoop and a 13 by 5 inch throat. This is not to mention the enhanced editing and other features you can access through the touch screen.

On top of all those features and functions there is also the stadium lighting function, dual spool stands, camera detecting button hole foot, the push button needle plate release, and even more.

Babylock went all out when they designed this sewing machine to help you with your sewing hobby. There is just too many features to list here and do the new sewing machine justice. 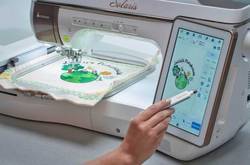 It took some work and lots of digging to finally come up with a price for the Babylock Solaris sewing machine. When we checked reviewers and other retailers, we saw that they were offering up to $3000 and $6,200 worth of related products for free.

Those offers made us suspicious as they were saying you would have to pay a very high cost to own this machine. We were right. The one price we were able to track down came in at almost $10,000.

To be exact the cost is at one retailer, $9,750. Given all the features and functions included in this sewing machine, that may be a bit on the low side of scale for what it might actually be worth.

Also, to keep the machine up to date and correct any errors, the company sends out up dates over the internet. These should be saved to a USB drive to make sure you get them installed right.

Is the Baby Lock Solaris Worth the Cost?

The final determination of this topic will be up to you. From what we have read about the sewing machine it seems to be the best one technology can create at this time. In fact, it may rival Bernina’s top machines.

You have already been introduced to the best features that were built into this machine but that is only part of the story. Some people who made the switch have not been happy with the Solaris as it does not include all the abilities previous sewing machines possessed.

Another complaint was that the foot pedal was normal and not sophisticated enough to work with this top of the line sewing machine. There was also trouble with needle and hoop placement once the hoop was accidentally bumped out of position.

Then one of the last major complaints about the Solaris was directed at Babylock’s customer service. It seems that is was less than stellar and far beneath what one would expect when paying more money for a sewing machine than you would for a great used car.

On the good side of the debate, one customer traded in her Destiny model and loves the new Solaris. She said there was a bit of a learning curve but after that the machine performed as it should.

Just because there are a few flaws does not mean this machine is not worth the price. Its built in features make it worth the price and a little work to learn how to use it right should help overcome those flaws. 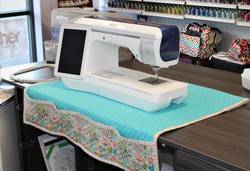 You may be surprised to learn that most babylock sewing machines are made by Brother. One set of embroidery machines for Brother uses designs created by Disney while the Babylock has Nancy Zieman designs.

When comparing necks of the two, the Solaris is .4 inches longer than the Luminaire. Both have large touchscreens so the skepticism that there is a lot of differences between the two machines is great.

In fact there are probably more similarities between the two machines than there are differences.Both have top quality lights to help you see what you are doing.Both have automatic threading systems and on it goes.

Also, both have similar warranties that run for 25 years on the mechanical aspect. Where the warranties differ is that brother’s computer coverage goes for 6 years while the Babylock’s only goes for 5.

Labor warranty is 1 year on the Solaris while the Luminaire gets 2. As we mentioned earlier, Brother makes Babylock sewing machines. This means that many of the Babylock models are mere clones of the Brother options.

You may get better customer service from Brother than Babylock. Some customers have reported their frustration with the latter’s treatment of those who spend a lot of money on the Solaris.

The destiny 2 seems to be another fine yet expensive machine. It has been reported that the cost for the Destiny 2 is a lot lower than the Solaris. That is in spite of the fact that the former has many of the same features and functions as the Solaris possesses.

One complaint that has come to light is that the Solaris does not have all the same features and functions that came or come with the Destiny 2. The upgrade may not be as smooth sailing if you have previously owned a destiny 2 and think the Solaris goes to the next level above that machine.

One of the more important differences where an upgrade has taken hold is that the neck on the Destiny 2 is 2 inches approx., shorter than the Solaris. This is a fine point but one that may be of special importance to more experienced sewers.

The other difference is that the Destiny 2 my have a better foot pedal than the Solaris. That is what caught the attention of one user. They regret paying twice the cost for the Solaris while getting an inferior foot pedal.

Your decision on which one is better may depend on your results and how you sew. 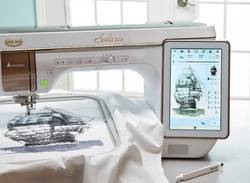 Lets start in with the first important spec that is on the Solaris sewing machine. It comes with one needle only. That information may be more important than learning its size.

The Solaris measures about 27 in width by 13 inches in depth. That should give you an idea if it will fit your current sewing cabinet or table. Its throat measurement is about 13.1 inches to the right of the needle.

Then it can create a 7mm wide stitch by a 5 mm long stitch with ease. Then the machine height is about 13.7 inches high making it not too tall but maybe just right for you and your work.

Plus, it comes with 2 type A USB ports to help you update the machine when the company sends them out. On top of that this sewing machine has free arm capability as well as variable speed control. You should be able to stay in control of this machine with ease.

How Much Does the Babylock Solaris Weigh?

If you weigh the machine only you will find that its total weight comes to about 43.2 pounds. But that is not the only weight issue that needs to be taken into consideration.

The embroidery speed is 1050 stitches per minute and it can use the embroidery pattern memory function to help you out. The hoops for your embroidery tasks measure about 10 by 16 inches overall giving you lots of space to create some wonderful designs.

You can also sew with the embroidery unit attached to the Solaris. That should save you a little time when it comes time to do some regular sewing projects. 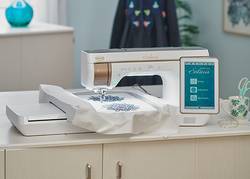 He or she also called it revolutionary. Other reviewers were not so kind even though that reviewer was not alone in his or her assessment of the Solaris. Those that did not like the machine found flaws that should not be evident on such a piece of top quality craftsmanship.

Then one reviewer clarified why certain elements from the Destiny 2 were omitted from the Solaris,. It is because Babylock, of Brother, used technology to help design new functions that made the old ones obsolete while performing the exact same tasks in different functions.

That bit of information could have been relayed to the public a lot sooner. Another reviewer did not like the customer service practices the Babylock corporation used when they were contacted. This is a big negative even if you do have a revolutionary sewing machine.

Our review of the Solaris says that it is a good sewing machine and may speed up your sewing while letting you produce more detailed and creative work. The machine has all the bells and whistles you could hope for on a top sewing machine like that.

While those features command a high price we are not sold on its value. One reason for that little negative point is that this machine may only be a clone of a Brother sewing machine. Why buy a clone when you can get the real thing.

The other drawback we saw in this machine is its price. The fact that the cost is handled like a state secret is off-putting. Obviously the machine has the features and functions to command such a price tag but don’t hide it.

Let everyone know how much you expect them to pay for a great sewing machine that does just about everything for you.

The Babylock Solaris may be the ultimate sewing machine. The company certainly done its research and produced a machine that is one of the best on the market today. Many people really like what Babylock has done and find it to be a superior machine.

But the current flaws need to be fixed before everyone will jump on board and think it is a great machine. The final test will be up to you and we hear that there are ownership classes being taught to help you use the machine correctly.

That is a point in the company’s favor. No use selling a machine no one knows how to use.