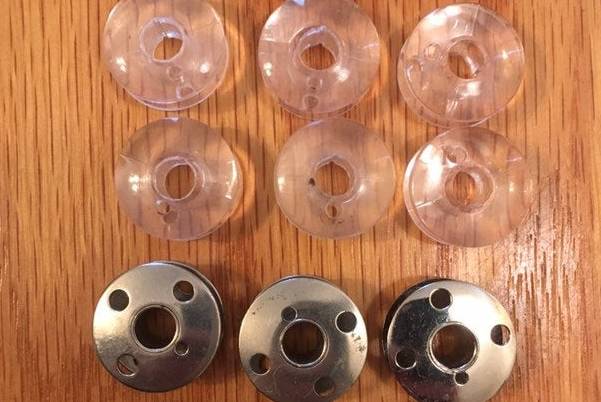 Plastic vs Metal: Can I Use Metal Bobbins Instead of Plastic?

The development of plastic has come along way since plastics were first introduced many decades ago in different products including sewing machines. The plastic parts in sewing machines can do a bang-up job if you get past the stigma associated with plastics.

To learn which bobbin to use where just continue to read our article. It explores the issue for you and gets rid of any confusion surrounding the two different kinds of bobbins sewers can use in their machines.

Are Plastic and Metal Bobbins Interchangeable? 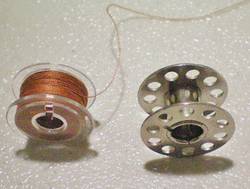 The reason they are not interchangeable is that the metal can wear out the plastic very quickly and you may have to spend a lot more money fixing the damage. Also, the metal bobbin may interfere with your magnetized metal hook.

There also may be some differences in the construction of the two bobbins making it harder to fit one into the other’s bobbin case. Although these differences may be slight, sewing machines are very finicky and demand that the right parts be used all the time if they are going to be able to do their jobs.

If you are given a set of bobbins by a friend or a relative, be polite if they are not made of the same material as the one your machine uses. Those people are just trying to be nice and want to help you out.

They also may not know about the differences between the two styles of bobbins.

Using Metal Bobbins Instead of Plastic 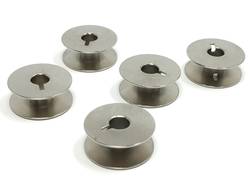 One may think that metal bobbins are more durable than plastic ones and that may be the case despite the advances in how plastics are made in the 21st century. Trying to save money is commendable but not in replacing plastic bobbins with metal ones.

Some sewers have tried plastic bobbins in their vintage machines and they have found that the plastic bobbins do not last as long, can distort, lose their shape, wear out faster and get burrs in them. The last one will ruin your stitching so you need to be careful.

If you try to place a metal bobbin in a plastic bobbin case you may see that the bobbin case wears out a lot faster than it is supposed to. That will cost you more money than you are ready to spend.

While metal is always better than plastic, it is just not a universal sewing material that has unlimited uses. 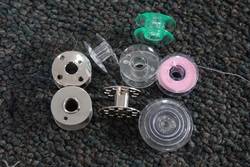 When it comes time to replace your bobbin just the slightest size difference can ruin your sewing day. The size of the bobbin has to be a precise match or your sewing machine is not going to work.

Even if the metal bobbin is the same class as a plastic one doesn't mean they are the same size. Part of the problem is that the sewing machine’s tension is set to the size of the bobbin.

A plastic bobbins tension setting is not the same as a metal one. Also, a bobbin that is taller than the one made for the machine will interfere with your stitches. Again, the class is not indicative of the same size if the bobbins are made from two different materials.

There are definite advantages top using metal bobbins over plastic ones. These advantages make them very desirable to use and often sewers do buy them to replace the weaker plastic versions.

Can I Use Metal Bobbins in My Brother Sewing Machine? 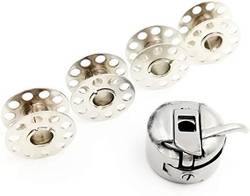 When you begin to look at the possibility of interchanging parts, you get the picture that different sewing machine companies are designing their sewing machines to accept the parts that a particular company makes.

What makes it even harder is that for some brother sewing machines, you are expressly told not to use metal bobbins. Those machines are designed for plastic varieties.

If you are in doubt always check the owner’s manual to make sure you get the right bobbin in your machine. Even if your machine uses a class 15 bobbin does it mean you can interchange metal for plastic. The same class does not guarantee the exact same size. 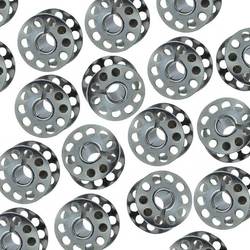 One of the things about Janome is that their bobbins are designed to work in a variety of sewing machine models. In fact, almost all of their modern sewing machines use the same bobbin.

The Quilt Maker Pro 18 and AQSD-16 do use metal bobbins but that may not be the case for all their sewing machines. You should consult the owner’s manual to make sure which kind of bobbin you need to use in your specific model. It will tell you if you can use metal, plastic or both.

The key for bobbin use in a Janome sewing machine is not to have one that is too tall. Your sewing machine will jam on you. The Bernina may be a bit different as if you put a bobbin that is too small inside that machine the thread may tangle and break on you.

This is the fickle nature of sewing machines. You have to be precise or you are simply asking for trouble. 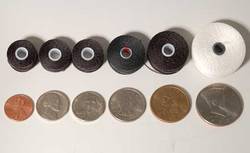 There are actually about 60 different bobbin types on the market right now. The most commonly used ones are the Class 15 or A style; the L Style; and the M style. The first two are about the size of a nickel but they are still not the same bobbin.

A Class 15 version has a flat top and bottom and is only made in metal or plastic. The L version is narrow and flat and is also made in metal and plastic. It also comes in aluminum as well. The Class M is the size of a quarter and comes in the same construction materials as the L style.

One of the things about Bernina bobbins is that they are usually milled and this is an important fact to remember. Other bobbins are usually stamped and the two are not the same. The Bernina bobbin can fit into a machine that uses a generic bobbin but the reverse is not true.

The Singer #8228 bobbin is a lot wider and looks like two wheels on a car axle. This model of bobbin is usually found on the old Singer treadle machines and it only comes in metal.

Finally, a bobbin made out of aluminum is also known as a quick wind bobbin because it spins faster than its metal and plastic counterparts.

When it comes to bobbins you have to be careful. They are not made the same and they do not fit all sewing machines. When in doubt always check your owner’s manual first. This is so you do not cause yourself some problems during your sewing time.