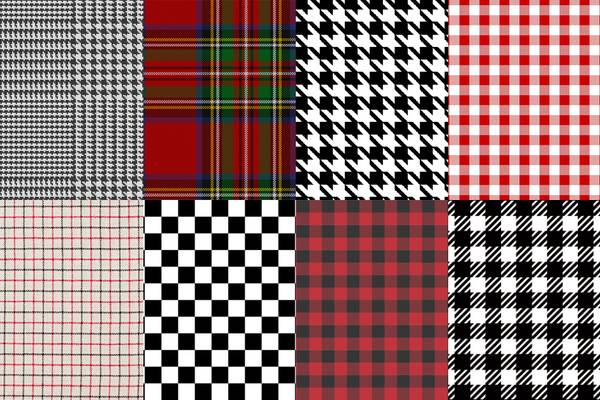 Whether they’re used in the home or in the wardrobe, checkered patterns add a dash of sartorial flair that we could all do with a little more of.

You've probably seen a fair few different types of checkered patterns in your time, whether it’s on a sofa covering, a shirt, or a skirt. What you’re probably a little less aware of are the many, many synonyms and names that can be used to describe the print.

What is a Checkered Pattern Called? 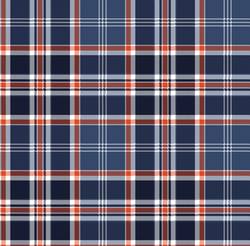 So, how do you know which kind of checkered pattern is which? Do designers really expect you to know the difference between a Prince of Wales plaid and a Dupplin check?

Not really, but it never hurts to find out. Stick around to do just that.

What is The Difference Between Plaid And Checkered?

Many people think “plaid” and “check” are the same. Those people are wrong (although don’t tell them we said so). In fact, plaid and check describe two very different types of patterns. While both types are stacked and square, that’s about as far as the similarities go.

Plaid refers to a pattern or colors which most closely resembles a Scottish tartan, and is notable for bars and stripes that sit at right angles. Checkered patterns, on the other hand, are divided into squares, usually of alternating light and dark colors.

What is The Black And White Checkered Pattern Called? 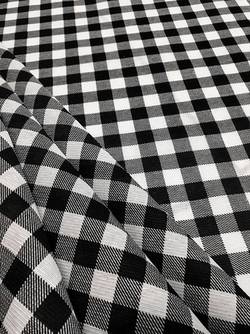 Ever seen a black and white checkered pattern and wondered what it’s called? Then you’ve come to the right place to find out.

The pattern originated in Scotland but has since become ubiquitous throughout Australia, New Zealand, and the rest of the United Kingdom. Although it’s become popular with civilians (and can be seen a lot in ska subculture), it's typically worn by emergency services as an easy way of marking them out from the general public.

And the name of this mysterious pattern? Sillitoe Tartan.

What's The Difference Between Gingham And Checkered?

Gingham and checkered… two terms that are often mistakenly seen as synonymous, but in fact describe two very different things. So, when should you use which?

If you’re looking at a pattern of squares in two different colors that are spaced in alternating positions, that’s a checkered pattern, right there. Think of the checkerboard flag you’d see at the end of an F1 race as an example.

Gingham, on the other hand, is a type of fabric made from cotton-blend yarn. The weaving process that goes into its construction creates a striped or checkered effect. If you struggling to picture what this looks like, imagine the type of tablecloths used at a rustic themed restaurant.

What is The Black And Red Checkered Pattern Called? 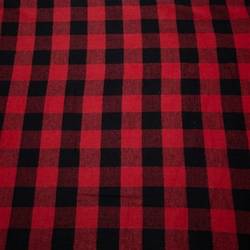 So, we know what gingham is and if push came to shove, we could give a pretty accurate description of a checkered pattern. But what about the different types of checkered patterns? Not all of them look the same, so it stands to reason they go by different names, right? Right.

Take that black and red checkered pattern you might have seen on shirts and home furnishings. The name of that mysterious pattern is, in fact, called buffalo check.

Buffalo checks are characterized by big, bold squares that have been created by the crisscrossing of two different colored yarns. Although the yarns are typically black and red, don’t be too surprised if you see different hues being used from time to time.

Checkered patterns come in a huge variety of types. Some of the most common names you might come across include:

Windowpane Check - Today's windows tend to be single sheets: 50 years or so ago, most would have been divided into panes. Remember the style? That’s what’s been referred to when people talk about windowpane check.

The pattern usually contains large squares, but can also utilize rectangles. In the case of the latter, the rectangles are always taller than they are wide, creating an elegant, lengthening effect that’s often used in men’s formal wear.

Buffalo Checkered Pattern - Buffalo Check is a pattern of alternating colors with a larger pattern size than the gingham print it’s sometimes confused with.

Traditionally, buffalo checks were always found in black and red. These days, other colors are also utilized, but black and red remains the favored combo.

What Patterns Go With Buffalo Check? 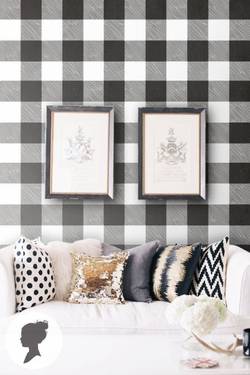 Mixing different patterns can be a dangerous game. Do it badly, and the end result can be an eyesore. But do it right, and you’ll end up with something truly spectacular.

Buffalo check has seen something of a resurgence in recent years, and can now be found splashed across as many trendy loft apartments as it can country farmhouses.

But this is a big, bold pattern that needs to be matched to other colors and patterns wisely. To make it work, just be sure to follow these two golden rules:

Checkerboard pattern - Ever seen the flag used to signal the end of an F1 race? What you’re looking at is a checkerboard pattern. This simple check pattern uses a black and white graphic to create a simple but effective checkboard pattern. A popular print, it’s often seen on fashion accessories, shoes, and wristbands.

Dupplin checks - Combine simple checks with a windowpane pattern, and what do you get? Dupplin check, an intricate pattern that gives the appearance of ‘checks within checks’.

Argyle checks - Argyle check is a classic design that you’ve probably seen more than once on a sweater or pair of socks. The pattern consists of a series of diamonds which will usually (but not always) overlap.

Ichimatsu checks - Ichimatsu checks can be easily confused with a checkerboard pattern. Both are made up of two squares of colors used in an alternating sequence. But they aren’t quite so similar as people think.

While a checkboard pattern is plain, Ichimatsu checks are often more elaborate, featuring other designs within the checks. Think of the type of patterns you’ll often see on Kimonos as an example.

Gingham Check - Gingham Check consists of a pattern of two or more similar-sized square, one of which is always white.

Think of aprons, tablecloths, and the kind of curtains you’ll find in a country farmhouse and you’re on the right track.

Madras check - Madras check is a lightweight cotton that’s often seen on summer attire. With its mix of plain weaving and plaid outline (not to mention its extensive use of just about every color of the rainbow), it’s an eclectic style that adds the fun to check in a big way.

Mini Check Pattern - As its name suggests, the mini check pattern is made from a series of small checks that look something like a gingham print, only miniaturized.

Graph Check - If you’ve ever seen a sheet of graph paper, you’ll know exactly what to expect of graph check. Created by a series of colored bands on a white background, it’s like someone’s taken a leaf from a geometry book and applied it to fabric.

Pin check - Pin checks suits are something that almost every working man has, and probably always will. A timeless pattern that’s created by the intersection of pin-sized stripes of one or two yearns thickness, it’s one of the most well-known checks around.

Tartan Plaid checks - If you’ve ever seen a kilt, you’ll know exactly what we mean by Tartan Plaid. Born in Scotland but now available across the world, it’s a popular check that can be seen on everything from skirts and wristbands to curtains and pillows.

The check itself is created by the intersecting of colorful stripes – if you haven’t seen one yourself, imagine the Madras Check but with more toned down shades and greater symmetry in the checks.

Tattersall checks - If someone took a windowpane check and miniaturized it, the end result would look a lot like Tattersall check. The pattern is created by interweaving thin, colored bands across a white backdrop.

Although some designers have attempted to modernize the pattern with a spectrum of rainbow shades, the most accepted (and traditional) colors used in a Gun Club check are black, red-brown, pine green.

Whatever you decide to call it, the pattern is the same: rows of broken checks that resemble either a dog's tooth or a four-pointed shape (depending on just how far your imagination takes you). Typically, the check is created in black and white, but in recent years, there’s been an increasing trend to introduce new colors to the mix. 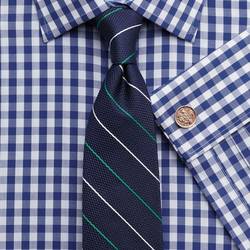 A checkered shirt is a classic. Some men might even go far as to suggest it’s a wardrobe staple. But it’s not without its challenges.

Wearing one alone (although hopefully with a pair of pants) is one thing. But what happens when you want to smarten things up with a tie? Are there any hard and fast fashion rules you need to know?

Ultimately, no. You can wear your checkered shirt with any style, color, and pattern tie you want. But if you want to look more style-savvy than laughing stock, you might want to bear just a few little things in mind.

What is Gren Plaid Called?

Gren Plaid (sometimes referred to as Glenurquhart check) is a woven twill design of irregular small and large checks. More often than not, it’s made from either black/grey and white check or other similarly muted colors. Thanks to its popularity with the Duke of Windsor, it’s also known as the Prince of Wales check.