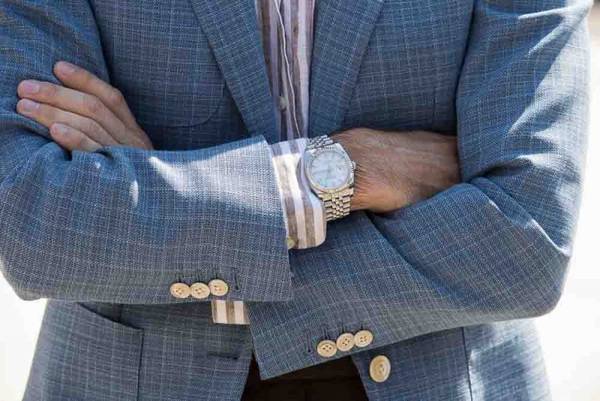 Does All Linen Wrinkle? How to Keep Linen From Wrinkling

In summer, nothing feels quite so good as slipping on some cool linen clothes. Light and breathable, they’ll keep you cool on even the hottest of days. The flipside? Linen loves nothing more than to wrinkle.

Does All Linen Wrinkle? 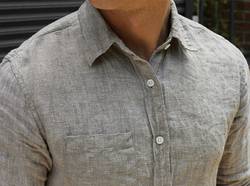 No matter how carefully you press a linen garment, it will, at some point, start to wrinkle. For some, the perpetually “crumpled” look is enough to swear off linen for life. For others, it just adds to the cozy, lived-in charm that linen does so well.

But does all linen wrinkle? Is there a way you can benefit from its loose, light feel without always looking a little less pulled together than you’d otherwise like? Kind of…

100% linen is the worst offender when it comes to creasing. If you want a linen garment that puts up at least some kind of resistance to wrinkles, a blend will be your best bet (stay tuned for some of the different options available).

Why Does Linen Wrinkle So Easily? 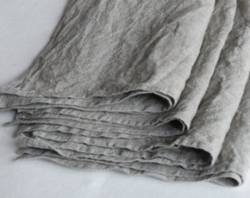 So, we know that 100% linen wrinkles. But why? Other natural fabrics like cotton and silk manage to get through the day without crumbling, so why can’t linen do the same?

Essentially, it all comes down to elasticity. While most natural materials have at least a degree of elasticity, linen, which is made from the fibers of flax plants, has almost none. If a wrinkle starts to form based on how you’re sitting or standing, the material won’t simply “spring back” once you change position. Simply put, once a wrinkle forms on linen, it’s there until you either iron or steam it out.

How Badly Does Linen Wrinkle? 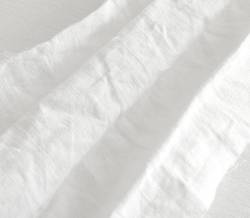 As linen lacks elasticity, it can, and does, wrinkle extensively given half a chance. If you choose to embrace the rumpled look and forgo the iron completely, linen garments will start veering from the charmingly lived-in to the positively unsightly in no time at all.

While you can’t avoid the wrinkles completely, most people prefer to keep them in check with a proper care routine (i.e. gentle handwashing, ironing and steaming). If you choose to start mangling your linen garments through a brutal wash, avoiding the iron, and storing in a crumpled heap, then be prepared for some serious wrinkles. 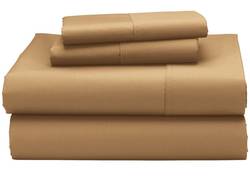 If you shudder at the thought of ironing your clothes, you might want to think twice about investing in linen sheets. Yes, they’re beautiful, yes, they’re moth resistant, and yes, they’ll wick away perspiration from your skin. What they’ll also do is wrinkle. Of course, you can opt for a linen blend to reduce some of the crumpling, but stick to 100% linen sheets and you’ll either need to get used to ironing them several times a day (and even then, they’re likely to crumple as soon as you sit on them) or get comfortable with the slightly mussed-up look.

If you want your bed to look pristine, steer clear of shrouding it in linen. If, on the other hand, you think the slightly rumpled look is more inviting than anything else, you’ll find linen sheets a fine thing indeed.

Can Linen Be Wrinkle Free? 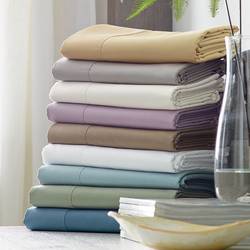 If you’re wondering whether 100% linen can ever be truly wrinkle free, then I’ve some bad news for you. Linen, by its very nature, will always succumb to wrinkles. Short of starching it to the point that it’s more cardboard than it is material, there’s not a lot you can do about that slightly crumpled look. Or is there?

Since man discovered the ability to blend one fabric with another, there’s a whole new world of possibilities out there. Want a garment to have the breathability of a natural fabric but the drape of a synthetic one? No problem. Want a linen shirt that can go more than an hour without being ironed? Simple – just combine the linen with something a little more wrinkle-resistant. 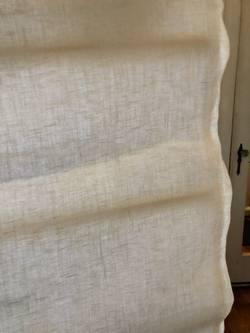 If you want a linen that doesn’t wrinkle, leave the 100% linens to one side and look instead at one of the several linen blends available. While not all deliver a 100% wrinkle free experience, they do at least promise a slightly less crumpled look than you’d otherwise achieve.

Cotton/ Linen Blend: A cotton/ linen blend has all the breathable qualities of pure linen but with the advantage of being both softer and more resilient to creases (although don’t expect to get away from them completely).

Wool/ Linen Blend: A wool/ linen blend might lack some of pure linen’s airiness and lightness, but it makes up for it with greater resistance to wrinkles.

Rayon/ Linen Blend: Rayon/ linen blends have the texture and body of linen, but with the softness, drape and wrinkle resistance of rayon.

Polyester/ Linen Blend: A polyester/ linen blend may not have the same breathability as 100% linen, but the addition of polyester imbues the linen with the body and refinement needed to hold the wrinkles at bay.

How To Keep Linen From Wrinkling While Wearing 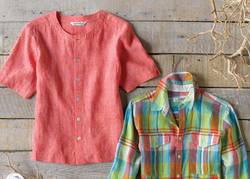 If you want to keep your 100% linen clothes free of wrinkles while you’re wearing them, then get ready to be disappointed. The short, slightly bitter, answer to the question of whether linen garments can go from dawn to dusk without acquiring some creases along the way is “no”.

Rather than spending your day fretting about every little crease and wrinkle that appears (because short of carrying a travel steamer around with you and mercilessly attacking every wrinkle that dares show its face, they’re going to appear), try ironing out your thinking. Linen wrinkles. Fact. Do a few wrinkles detract from its beauty and charm? No.

Stop seeing wrinkles as a flaw and learn to embrace them as an inherent characteristic of this gorgeous fabric. By all means, iron and steam away the worst of the wrinkles for a fresh look in the morning. But as for keeping your garments flawlessly smooth for the entire day? Forget it.

Garments or sheets made from 100% linen will never be 100% free of wrinkles. There are, however, ways you can help minimize their appearance, starting with ensuring proper care during the washing and pressing phase.

Start by hand washing the linens in cool water with just a few drops of mild detergent. Be very careful not to twist or crumple the material as you agitate it. Once washed, rinse away any suds with cool water. Avoid wringing the garments to squeeze out extra water.

Dry the garment flat. While it’s still slightly damp, flip it inside out and lay on an iron board. Iron on either a high steam setting or as per the instructions on the care label. Spray the garment with a little spay mist as you go along.

Once the inside of the garment has been ironed, turn it right side out and repeat the pressing/ spraying method.

Hang from a padded hanger and allow to cool completely before hanging in the closet.

Can You Wear Linen Wrinkles? 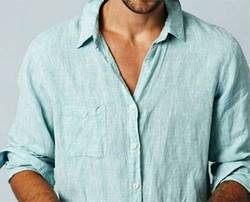 If you’re going to wear linen, you’re going to have to face the fact that it’s always going to look slightly rumpled. No matter how carefully you sit, walk, or breathe, linen will at some point do what linen does best: wrinkle.

While there are ways you can minimize the appearance of wrinkles, even the best-pressed linen shirt is going to look a little crumpled by the end of the day. But as anyone with a fondness for its breathability and lightness will tell you, a few little wrinkles are a small price to pay for the pleasure that comes from wearing linen… and certainly not worth getting yourself in a tizzy over.

Unlike some fabrics that benefit from a razor-sharp, clean pressed look, linen can take a few crumples, creases and wrinkles and look none the worse for the experience. So, can you wear linen wrinkles? Most definitely. As long as you press the garment thoroughly before wearing (trust me, there’s a difference between clothes that look a little crumpled through wear and those that look wrinkled because they’ve never seen an iron in their life), a few lines are nothing to worry about, and do little more than add to linen’s unique charm.

Do You Crease Linen Pants? 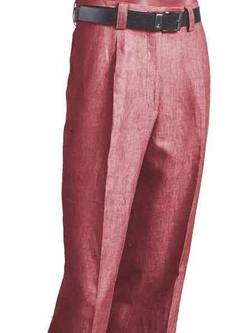 A straight, pin-sharp crease down the front of pants can help give a pulled together look in even the most casual outfit. It also serves a functional purpose, allowing pants to be kept neat while hanging in a garment bag. But can you iron a crease in linen pants? Or, perhaps more pertinently, should you even try?

Linen has a relaxed, lived-in vibe that isn’t always complemented by the sharp, sophisticated look that a crease adds. Moreover, constant creasing in the same place can break linen threads, leading to a worn look that’s rarely flattering. That said, unless you’re washing and creasing the pants multiple times a week, you probably don’t need to worry too much about wearing down the fibers.

A good rule of thumb when it comes to creases is if the pants came with a crease, keep it. If they didn’t, don’t be tempted to add one. Not only is it a pain to do, but it’s also unlikely to be appropriate for that particular style.

Remove: Don’t ever leave linen garments to fester in the machine after washing. The longer they sit around in a heap, the more they’ll wrinkle. Remove from the washer while still damp for the best results.

Iron: Iron linen while it’s still a tiny bit damp. Iron on a high steam setting and use a little spray mist as you go along.

Steam: Steaming your linen garments is a great alternative to ironing. While you’ll still need to press trousers if you want a sharp crease down the front, steaming jackets and shirts will have the wrinkles falling out in no time.

Starch: In the world of linen, starching is a contentious subject. Some insist a little starch spray works wonders at keeping linen attire as wrinkle-free as linen will ever get. Others, on the other hand, would rather a slightly crumpled linen shirt than one that looks like it’s made from cardboard. If you choose to go the starched route, keep it to the areas which wrinkle the most or where the fabric curls (collars, button plackets, etc.). Hang the garment up, spray the necessary areas, then gently work the fabric until it hangs without creasing. Allow to dry while still hanging.

Hang: Never be tempted to fold linen clothes. Even if you ironed them before putting them away, the crease lines they’ll develop in storage will negate all the good effects. Always hang in a closet with plenty of space to avoid the wrinkling effects of overcrowding.

Test: If you’re going to use starch or a wrinkle relaxing spay on a garment, always test it on a small part of the inside hem first to make sure it won’t stain.

Skip: Dryers might be quick and convenient, but don’t be tempted to pop your linen garments in one. Linen is best dried by either lying flat or hanging from a padded hanger. While the garment is still a little damp, gently work the seams, hems and any wrinkled areas to smooth away the worst of the wrinkles.

Embrace: The best way to care for your linen? Stop fighting it. If you’re going to wear linen, learn to own those wrinkles, because trust me, you’re never getting away from them completely.

I hope you’ve enjoyed today’s in-depth look at the wonderful world of linen. If you’ve seen any tips or tricks you feel others could benefit from, please feel free to share the post.