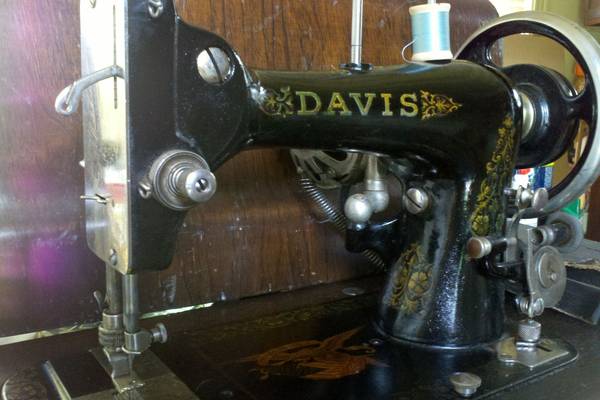 History of Davis Sewing Machine Company (How To Date)

The early history and founding of the Davis Sewing machine Company is an interesting tale. The best way to date a Davis sewing machine would be by its serial number. You can also approx. date your machine by the model name since so few were made.

To find all about the Davis Sewing Machine Company and its history just continue to read our article. It delves into the subject and brings you the best information possible. A Davis sewing machine was a very good machine while it lasted. 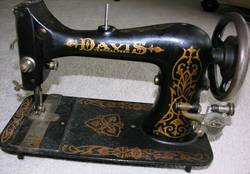 Prior to forming an actual company, Job A. Davies started making sewing machines in New York City. This was about the year 1860 and those early machines probably used popular sewing machines as inspiration for their design.

Those early sewing machines used a vertical feed system instead of a feed dog. 9 years after producing his sewing machine, Mr. Davis moved to Watertown, New York, and with the investment capital from John and Joseph Sheldon.

The amount of the investment depends on which history story you read as one story says it was $150,000 for the original investment and that figure was raised to $300,000 as the plant was outfitted with the best equipment possible.

Another story has those figures at $150 and $300 but that low amount doesn't make any sense considering the amount of machinery that was needed to produce those top sewing machines. Not to mention the rent and other expenses startups face.

The popularity of the sewing machines was so great that the company had to move twice before it was able to find facilities that matched their sales orders and needs. The success of the Davis sewing machine has been credited to the vertical feed which made moving fabric through the needle a lot easier and smoother.

What was good for Davis turned out to be good for Watertown as the company contracted out its casting needs to another Watertown company and the amount of the orders increased as time went by.

By 1880 Davis had 9 different models all using the vertical feed. The cost of their machines ranged between $55 and $150. The demise of the company came in two ways. First, for whatever reason they had, the company cut down on the quality of their sewing machines.

The second error was placing their eggs in one basket. The company won a contract to sell their machines through Sears and Roebuck but when Sears and Roebuck started to sell sewing machines made from other companies, Davis lost their main sales outlet and could not recover. Their assets were liquidated in 1924.

A very good history can be read here and here.

When Were Davis Sewing Machines Made?

For such a good company and a good innovative sewing machine, their sewing machines were not produced for a very long time, given that similar companies have lasted for over 140 years.

The first Davis machines were produced in about 1860 by Davis himself. The Davis Sewing Machine Company came into existence in about 1868. It was 1924 when the company finally went out of business and changed into the Huffman Manufacturing Company which produced bicycles and not sewing machines.

In total, the Davis Sewing Machine Company produced sewing machines for just over 60 years. If it hadn’t lowered the quality of its machines and did not place its sales in one area alone, who knows this company may have survived longer and produced some great sewing machines.

With their creative and innovative spirit that made their sewing machines so popular, this company could have developed different upgrades to help them weather any business storm that hits all businesses from time to time.

How To Date a Davis Sewing Machine 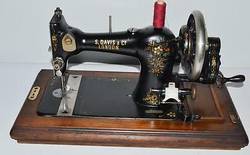 To help you date your Davis sewing machine all you have to do is click on this link. It has the total serial numbers and the years they were produced. Just compare your serial number to the one on that list and you should know when it was made.

This is one of those times where the age of a sewing machine is not lost to history or bad Japanese record keeping. There were about 9 different models made by the company with the Burdick the first one sold by Sears & Roebuck.

That model was first made and sold in 1900. There was a Minnesota A, B & C trio of models that followed the Burdick. We mention these as some historians do not always label the machines by their rightful model name. To see the different models the pictures are at this link.

To get a better view of the different serial numbers this company used and the dates they were placed on their machines, just click here. This website outlines that data a lot clearer than other websites.

Also included on that page are some parts catalogs if you are looking for specific parts or need to know where they go. As is an image of the complete list of the different models produced by the Davis Sewing Machine company.

They eventually made more than 9 models. For some reason, they like using letters for their models instead of numbers. The company went through the alphabet as they created new variations of their sewing machines. 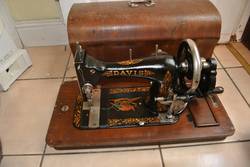 There appears to be some latitude when it comes to fixing the value of these antique sewing machines. The key factors will be age, condition, and if the sewing machine comes with its original cabinet or is a stand-alone model.

Some people we checked had the value down to about $20 and that was confirmed by eBay where their stand-alone Davis sewing machine was listed at $20. The photo did not do the machine justice as it doesn't appear in as good as condition as it might be when you saw it face to face.

Job A . Davis moved from New York City to find the investment capital he needed to produce his top-notch sewing machine. He had to travel to Watertown New York to find that needed support. Then during its tenure in Watertown, the company moved 2 more times trying to find the right facilities to manufacture.

Then in 1889, the company was wooed by the officials from Dayton, Ohio and the company moved almost everything to that city including employees. About 80 employees made the move with the company.

It was in Dayton that the sewing machine company started making and selling bicycles. This product became so successful that the Davis company formed the Huffman Manufacturing Company.

It was this latter company that took over all of the Davis sewing machine company when it went out of business in 1924. Huffman remained an American company up until 1999 when it moved operations to Mexico.

The Huffman company seems to be in business today manufacturing different products. 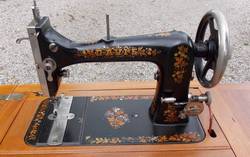 This is an important part of the history of the Davis Sewing Machine Company. Some historians use it as one of the factors as to why the company started to go downhill. The lawsuit initiated by Davis because it was one of their patents that had been appropriated by the Hat Sweat Company.

The exact date of the lawsuit is not known but it seems to have been engineered by the new owner Mr. Huffman. The approx date was about 1890 after the time of the sale of the company to hat businessman.

The gist of the lawsuit was that Davis told the Hat Sweat Company to stop using a sewing machine attachment or pay a royalty. The latter company refused thus the lawsuit was born.

It was a hard-fought case but Davis eventually won out. What they won is not known at this time. The Hat Sweat Company lost the lawsuit but in terms of revenue, it may have won. The company earned over a million dollars from using the Davis patent as their own.

There seem to be some mysteries surrounding some patents involving the Davis company. The first one is that on the slide plate covering the shuttle 8 patents are listed. The only problem is that 3 of those dates for patents do not exist.

No record of them has been found linking those dates to Job A. Davis or the Davis Sewing Machine company. There is also no record as to why Mr. Davis or his company would want those patent dates listed on his machines.

The second mystery involves Mr. Davis again and a patent chronology issue for the vibrating shuttle system. It seems that improvement was made to this system in 1883 and again in 1885.

But those patents do not mention Mr. Davis’ patent of 1860 or two other patent holders. A British patent of 1849 and 1850 were also excluded from the history of the patents for this device. 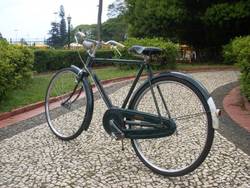 This company was formed just prior to the demise of the Davis Sewing Machine company. The latter business was liquidated because of the lost revenue and sales outlet. The Huffman company took over as a holding company at first and only kept the drop-forge and foundry departments were kept running.

One of the major inventions that took place after this time was when one of the employees invented a rigid spout to help pour oil from a drum. The company almost went out of business in 1938 when it could not keep up with the demand one of its customers, Firestone, had for the Huffman bike.

The grandson of Mr. Huffman was able to streamline production helping the company produce more bikes and saved the company from ruin. From that point, the Huffman Manufacturing Company was able to obtain vital government and private contracts making it the success it is today.

The move from Watertown to Dayton seems to have been engineered by George P. Huffman who bought the Davis company in 1889. The new ownership may be the explanation for the demise of the quality of the Davis sewing machine.

The Dayton Brand was used for the bicycle manufacturing up until 1949, which was the year the first Huffy brand bicycle appeared. From that point on Davis company ceased to exist.