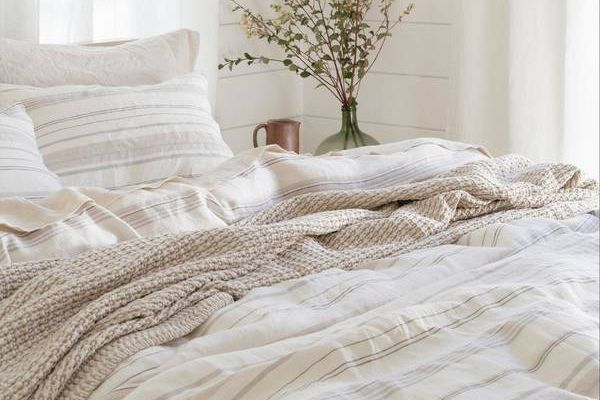 That is another great aspect of sewing. You have so much versatility and flexibility. Even when it comes to making quilts, there is no one size fits all method or source for quilt fabric. You can turn many fabric items into a nice-looking quilt.

There different methods you can use and one simple method would be to remove the duvet, then seam rip the 3 sides so you have 2 different pieces. Next, add in some flannel to give the quilt a little body and then quilt as normal.

To learn more about turning a duvet cover into a quilt just continue to read our article. It explores this topic so you have the information you need to do the job the best way possible. Take a few minutes to see if the following information will help you.

Can you Put a Quilt in a Duvet Cover? 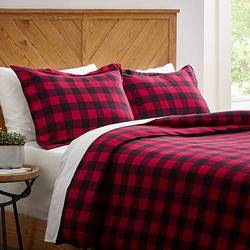 If the question is to be taken literally, then yes, you can put a pre-existing quit into a duvet cover. The only issue you would have would be the size of the quilt and the cover. If they do not match up, you will have some adjustments to make to get a secure fit that keeps the material nice and comfortable.

Then if you want to read the question in the context, can you turn a duvet cover into a quilt, then the answer again would be positive. There are many steps you can take to do just that. Fabric is fabric and just about any material can be turned into a quilt if you have enough of it.

The good thing is, as we mentioned earlier, is that there are many different methods you can use. The method you choose will be determined by your region’s weather conditions, the time of year, and your purpose for the quilt.

Duvets can be too warm for the summer months and it would be a shame to waste that beautiful cover and hide it away till the cooler temperatures return. A little creativity will help give the cover another duty to perform.

How to Turn a Duvet Cover Into a Quilt

There are complicated methods and there are simple ones. The simple one is taking the cover, and this works best on older duvets that aren’t used that much, removing the duvet from the inside and storing it away for some future projects you might want to tackle.

Then seam rip the other three sides so that you have 2 separate pieces of fabric. If the duvet color is older and a bit faded, take the time to dye the material a new color before turning them into a quilt.

Depending on the fibers used for the cover, your selection of dyes is quite broad, as are the colors you can choose. Take the time to dye the cover pieces and while you are waiting for the material to finish that process, you can select the flannel material you want to place inside.

This method gives you control over the quilt weight and you can turn it into a nice summer quilt with the right flannel fabric. Once the cover material is ready, add the flannel piece to the mix and quilt like normal. You have a lot of freedom here in this method to create a nice summer or Spring quilt.

How to Make a Quilted Duvet Cover 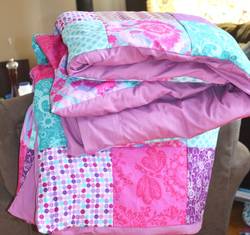 The first step is to assemble your tools and supplies. You will need scissors, a rotary cutter, different colored fabrics, a quilter’s ruler as well as a sewing machine, thread, iron, and so on.

To make a quilted duvet cover out of cuddle fabric, you will need 5 packages of Baby blue moon cuddle cake kits, 3 yards of 90-inch wide cuddle fabric, and 2 yards of 1/2 inch ribbon. Then getting started you need to open up the kits and arrange the different colors into the pattern you want the cover to look like.

Keep in mind that you need to know how big you want to make the duvet cover. This decision will help you arrange the rows of material as well as determine how many rows you will need. Don’t forget to leave yourself the seam allowance.

Once those decisions are made and the fabric is laid out in the design you want, pin the right sides together and start sewing. Sew all the blocks in a row together giving yourself 1/2 inch seam allowance with each joint.

Do this row by row until you have them all done. Once the rows are all done, pin two right sides together and sew again with the same 1/2 inch seam allowance. Take special care to have your seams line up. Go one row at a time until all rows are sewn together.

Now take your rotary cutter and quilting ruler and cut off any excess fabric. Then take the excess and turn them into 2 1/2 inch strips up to 21 inches long and cut the ribbon into 12-inch lengths. Attach one side of the ribbons to those strips, about 3 per each, and set aside.

Can You Make a Duvet Into a Comforter?

It can be done though with a little ingenuity and a little sewing talent. Another reason this is strange is that some people consider duvets comforters already and there is no need to make any alterations.

Part of the problem in turning a duvet into a comforter will be the filling inside the duvet. As one person said, all down-filled comforters are duvets, the only difference is the color schemes that are available for both.

The duvet color scheme is more neutral while you have a myriad of colors and designs available for the comforter. Then the size of the duvet may not be as large as a comforter so your current duvet would have to be used on a smaller bed if you want it to hang over the edge of the bed for added warmth.

With all of that said, yes it is possible to do this but there may not be a need to do it as the comforter can come in a variety of styles and fill that will meet your needs as well as be big enough to overhang the edges of the bed.

You will have to make some adaptions and alterations to the duvet to make it work as a comforter but simply buying a new comforter and donating the duvet may be the best way to go.

How to Make a Duvet Into a Comforter 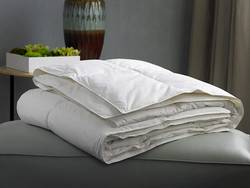 As you just read, there is no real information on how to do this project. You would have to take your sewing, quilting, knowledge, and experience and use it to guide your alterations of the duvet.

One major factor which is a challenge you have to overcome will be making the duvet large enough if you want it on your bed. That means adding material that may not be found in the fabric stores and you may end up with a mess.

Also, the type of fill inside the duvet will influence your design, and duvets are usually flatter than comforters even when filled with the same material. The reason they are flatter is that it is easier to insert them into the cover without fighting the extra bulk.

But you are still going to be troubled by the size factor. Duvets rarely go larger than the bed itself and comforters have a lot more material to them. The best thing to do here would be to simply go out and buy a comforter that will fit the bed you want it on.

Then you can get the thickness, the feel, and the size you want without a lot of hassle. A hassle is what you are asking for when you attempt this project. There is just too much work involved to convert the duvet and you may not be satisfied with the results. Think it through before you attempt.

How do You Put a Quilt in a Duvet Cover? 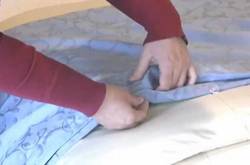 This is a very simple process unlike trying to convert a duvet into a comforter. Once you have made your quilt, you should measure the size of the blanket. Duvet covers do not have a lot of play to them when it comes to sizing and you would have to make sure the quilt was the right size for the cover before doing this project.

Measure your quilt and then measure your duvet cover and if they match you are ready to proceed. The process will be the same as putting a duvet inside a duvet cover. First, lay the cover out making sure it is flat and there are no obstacles in the way.

Second, fold the cover in half horizontally and then do that step a second time in the same direction. Put the cover aside and lay out your quilt making it nice and flat. Third, fold the quilt in the same manner as you did the duvet cover.

Fourth, place the quilt inside the cover and then shake the two pieces of fabric so the material unfolds. make sure to hold onto the corners of both fabrics so you do not have the quilt sliding halfway down.

Now smooth the two fabrics and you are done.

Some Differences Between a Duvet and a Comforter

While people say the two are the same thing, there are a few differences that set them apart from each other. Here are some of those differences:

1. The comforter is longer and wider than the duvet.

2. The comforter needs companion bedding like a top sheet and blankets while duvets do not.

3. Comforters need washing and may be difficult to wash. Only the duvet cover needs washing and that is easy to do.

4. Duvets come in neutral colors making them ideal for any bedroom decor, a comforter’s design may limit its room use.

5. Comforters can be used in any room in the house while duvets are limited to the bed.

It is not hard to turn a duvet cover into a quilt. As long as you have the knowledge and the talent you can do just about anything with fabrics. The key will be to make sure the conversion looks good.

Turning a duvet cover into a quilt may add a little spark to your bedroom decor and spice up the look somewhat. It never hurts to try.

How to Sew a Poncho Easy – Poncho Sewing Pattern and Fabric