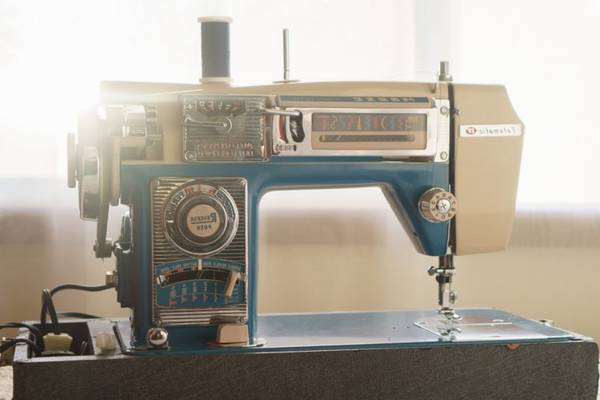 It just isn’t like the old days. Today sewing machines are made from plastic and their longevity can be questioned on an almost daily basis. The old machines were made from metal parts and even after 50 to 60 years they are still rolling on.

The old Morse sewing machines may be one of your favorites but its origin is not so positive. While there were Americans at the head of the company selling and distributing these well-built sewing machines, they were actually made in Japan.

To learn even more about the old Morse sewing machines just continue to read our article. There is even more surprising information for you to read about and digest. Things are never what they seem to be.

Who Made Morse Sewing Machines? 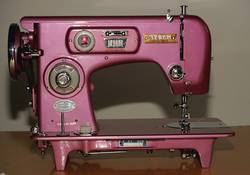 It has long been thought that the Morse Sewing Machine & Supply Corp out of New York City was the company responsible for making these top metal sewing machines. But that is far from reality.

All that Morse did was import different sewing machines that were copied from other brands. Those brands were Necchi, Sears Roebuck and Nihon Mishin Selzo Kabushiki Kaisha and if one decided to look closely enough, they would see some similarities between the Morse sewing machines and those brands’ offerings.

There have been two Japanese firms that have been cited as the real manufacturer, one was named Pine and the other named Toyota. But Morse and his partners hid the country of origin identification tags and no one really knows who made the Morse sewing machines.

Instead, they used the brand names of Morse and Mercury to mislead the American public into thinking that their machines were made in America. This got the company in a lot of trouble in the 1950s.

The company and their sewing machines were found guilty of violating the Federal Trade Commission Act but what action was taken is not known at this time.

How Old is My Morse Sewing Machine? 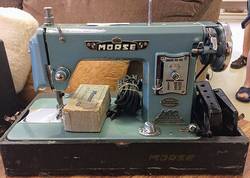 The usual way to tell the age of a sewing machine is by finding the serial number and looking up old records. For the Morse sewing machine that may be a bit difficult as the company went out of business in the 1960s.

No one really knows what happened to the records or if they do they are not saying. What can be known is that the Morse Fotomatic #17093 manual is dated to 1953. So if your sewing machine matches that serial number than it is almost 70 years old.

The difference between the old vintage Morse machines and any modern ones claiming to be Morse is the construction materials used. The ones made in more recent times are made of plastic and not very old.

If you have an all-metal Morse machine then you are looking at an age between 50 to 70 years of age. There won't be any older than that as the company did not form until 1948. Then since the Japanese didn’t keep records it may be impossible to find the age of a vintage Morse sewing machine.

How to Date a Morse Sewing Machine 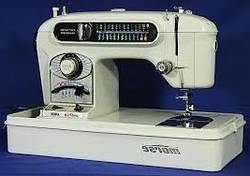 If your Morse sewing machine is made from all metal parts, then your sewing machine should be somewhere in the vicinity of 40 to 70 years of age. The Morse Sewing Machine & Supply Corp was only in business for approx 15 years and what Mr. Morse did after his company went out of business is unknown.

It seems he was able to rebound from the court decision about the violation of the Trade Commission Act but that rejuvenation only lasted for about 10 years. There is a source that says Morse sewing machines are still being made today but who owns the company and who manufacturers that brand is unknown at this writing. 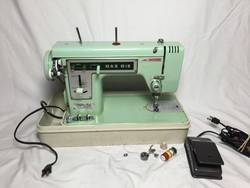 The Morse Zig Zag 550 seems to be a fine machine. The one we found was a dull green color but it seemed to be in fairly good shape with the motor working as it should.

The case looks like plastic helping to keep the weight down. The all-metal Morse sewing machines weighed more than a boat’s anchor and were very durable. This one has stood the test of time and its parts seem to be in good working order.

Our problem has been that we were able to find owner’s manuals for a variety of Morse sewing machines but not this model. More people talk about the 4300 than they do this one. There is an 1550 model out there but it may not have the same abilities and capabilities as the 550.

There is also a 5500 model and here is a link to all the owner’s manuals still available for Morse sewing machines. 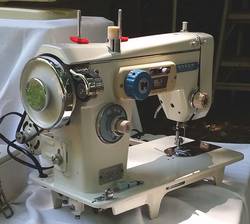 This machine may be known by its more popular name the Fotomatic. There are a variety of these models still operating and it seems that they never lose their magical sewing powers no matter how many years have passed since their creation.

Some people have compared this model to the old cartoon figure Mighty Mouse, not only for its color selections but because it is a powerhouse of a sewing machine. Where people go wrong when this machine starts to fail is that they toss the baby out with the bathwater.

They think the motor has gone bad so they tossed it out. All the motor needed to return to normal was a good cleaning, lube job, and a little extra care. One of the unique features on the Morse 4100 is that the handwheel needs to be disengaged when winding the bobbin.

Also, the needle uses 3 positions to get your stitching done. The left is for the straight stitch and the middle and right positions are used for the zig-zag stitch. Then with 4 feed dogs and an easy to find needle plate, your sewing should still go smoothly even though you are using a vintage machine. 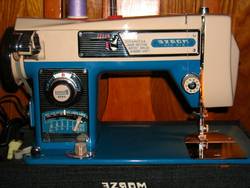 One thing about sewing machines they all have one thing in common.No matter when they were made, they stop sewing well when their needle is placed in the machine backward. That is the same issue for many Morse 4300 sewing machines. It will not sew well if you do not put the needle in correctly.

You can get the owner’s manual at the link mentioned above but it will cost you about $10 for the PDF file. Plus, the machine has the stitches and parts you want to see on a sewing machine. For its age of course.

Everything is easily and conveniently located so you do not waste any hand motions while you are sewing. Also, the sewing machine is not that difficult to take apart and maintain it. Lubricating the machine only takes a few minutes and once that is done it should work well for you.

The good news is that the Morse 4300 is not that expensive to find. We saw one price at eBay for only $29 and others have said that the old machine goes for even less depending on where you find it. If you can fin done, don’t pass it by as the old Morse machines still work like they are supposed to.

We cannot speak for every Morse sewing machine that was sold in America but for the most part, yes they are good machines to have. We have not run across a good legitimate complaint about these machines yet.

Even though their history is not the best, they were still well manufactured and came with parts that lasted a lifetime. Morse may have tried to fool the public on where the machines were made to make more sales.

After all, the anti-Japanese feelings from the War had not fully gone away in the public’s mind. But that hidden piece of information doesn't mean that these sewing machines were of inferior quality. Many are still working like they were first built 60 years later.

That longevity speaks to the quality of the sewing machine and the people who took the time to build it. 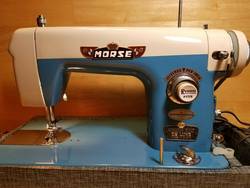 They may have an old machine lying around the house and want to free up space. You never know until you ask them. The next place to look would be the classified ads in your local newspaper or free classified papers that most cities seem to have.

Or you can use that option and place an ad in them saying you are looking for an old Morse sewing machine. If you are not careful you may be inundated with people talking about their non-Morse machines.

Next up would be your local thrift store or sewing machine repair shop. They may have one lying around and depending on the owners you might be able to swing a good deal for the ones they do have.

Your last chance may be Craigslist, eBay or some other marketplace you find online. The prices for a Morse will vary depending on if the owner knows what they own or not. Right now prices seem to be cheap.

If you are online you can check the different sewing discussion forums to see if they have any leads for you. Again you won’t know until you ask.

A word on The Fair Trade Commission Act

We mentioned earlier that Morse, his wife, and partners ran into trouble with this Act because of the way it was marketing their sewing machines to other Americans. There are 3 main purposes of this Act:

In essence ‘business are not allowed to mislead or deceive you’ and make sure they do not withhold vital information you need to know. The Act also grants you the consumer rights and a course of action if you feel you have truly been misled or deceived.

To get the information that concerns you about the Fair Trade Commission Act just click here and here. It will take some reading and searching to find where the Act helps you out the most.

Even though the Morse sewing machine violated US trade laws that behavior does not take away the quality of the sewing machine. Morse may have felt he needed to get consumers to think his machines were American made so that sales would not be hurt by the anti-Japanese bias that permeated America at that time.

You may be sitting on a sewing treasure and do not even know it.