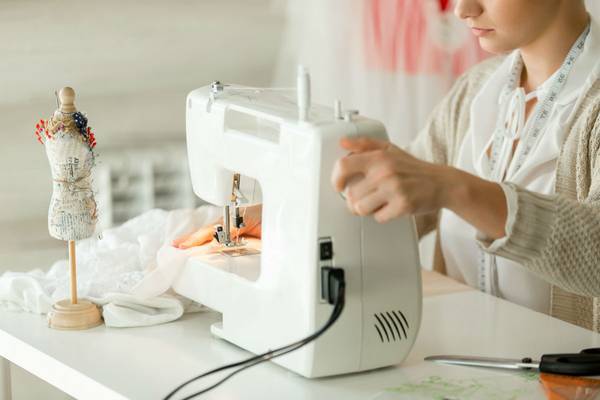 How Much Electricity Does a Sewing Machine Use Per Hour?

Its all about power. Most people enjoy their sewing hobby. It gives them a peaceful amount of time to think, relax and get ready for when their loved ones come home. But at what cost? Sewing machines use power so it may or may not cost you a lot to do your sewing.

How much electricity does a sewing machine use per hour? A typical home sewing machine may be in the 100-watt range. One estimate for portable sewing machines says that you are paying about 0.013 cents per hour every time. For the day you may be spending about 10 cents.

To find out how much it costs you to use your sewing machine, just continue reading our article. It tracks down the costs so you can be sure you are not spending a lot of money on your sewing hobby.

Does a Sewing Machine Use a Lot of Electricity

Not really although the overall would depend a lot on the features, how long you use it and other functions your sewing machine has. A typical home sewing machine may be in the 100-watt range.

That means to register on the cost scale you would have to use it 10 hours to reach one kilowatt of electrical use. If your geographical location pays, for argument sake, roughly 30 cents for a kilowatt-hour of electricity, that 10 hours would cost you 30 cents a day. If you sewed for 10 hours a day.

Of course different machines and geographical areas have different usage and costs so your figures may be higher or lower than ours.

How Many Amps Does a Sewing Machine Use

As we stated most normal sewing machines run about 100 watts. That is the middle figure on the scale of 75 to 150 watts depending on the sewing machine. Even the higher wattage figure will not run your amps usage too high.

If your machine uses a light, you can add another 15 to 25 watts of electrical use to your sewing machine cost. Most homes run on a 110 to 120 watts system so your amp total would not be that high.

A rough figure would be about 1 to 1 1/2 amps depending on your sewing machine and its features. If by chance you are using an industrial machine at home or in your sewing business, then you can expect to use about 4 to 10 amps per day depending on how long you run your machine.

Click on this link to calculate your own usage and figure out your specific costs.

The power consumption of your sewing machine should be listed in your owner’s manual. It is usually stated in watts and most home machines do not pull a large number of watts per hour.

If you add in the light bulb, your top power consumption may reach about 175 to 200 amps depending on your sewing machine. When you work it out per hour, you are not using a lot of electricity every time you turn on your machine.

To consume a lot of energy, you would have to be a power sewer who does nothing else all day except sewing. The above link will help you figure out how much power your specific sewing machine consumes. It is a helpful calculator which gives you a good idea if you are being energy efficient or not.

The answer to this question depends on when your industrial sewing machine was made. In pre-1993 days, you were looking at using about 430 watts per hour. That does sound high, but the added features, etc., drove the consumption rate up from 280 watts per hour to that level.

But that was before things changed when the millennium changed. Advanced industrial sewing machines were built with advanced direct drive in the beginning of the new millennium. That advancement brought the power consumption down to 180 watts per hour.

But that achievement was topped in 2005 as technology continued to make upgrades on the industrial sewing machine. At that year, those upgrades brought the power consumption down to 130 watts per hour.

It is highly unlikely that that level will be topped but that may not be an impossible barrier to break, eventually. Now keep in mind that there will be industrial sewing machines that consume a lot more power and can reach figures of about 2500 watts per hour due to the heavy use and demands made upon the sewing machine.

Often the power rating comes in the term voltage and that means the type of electrical outlet you can plug your machine into. A 120 volt sewing machine can work well under the standard America 110 to 120 electrical system found in every home.

A sewing machine marked 220 or 240 volts cannot. It would need its own 220 outlet to function like it is supposed to. In order to figure out the wattage on your sewing machine, use the above link to help you make your calculations.

If you are moving to another country that doesn’t use 110 or 120 voltage system, then you will need an adapter or voltage regulator to help you get the right amount of power to your machine without ruining it. 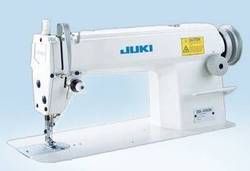 This answer is also a depends answer. It will depend if you own a home sewing machine or an industrial model. The industrial models are usually rated for 220 volts which put their wattage up around the 500-watt mark give or take a few watts.

That 500-watt figure is a ballpark number and the Juki sewing machines will be around that area but not hitting it exactly. For home machines, you are looking at about 110 volts which puts those models in the 175 to 150-watt range.

Unless they are thinking of starting a sewing business in their homes.

For a Brother home sewing machine you can figure out the watts by using this simple equation: voltage times amps equal watts. If your Brother sewing machine runs on 120 volts, it needs about .65 amps to operate to its full potential.

So to figure out the wattage, all you do is multiply 120 by .65 which equals about 78 watts. That figure is well within the standard home sewing machine wattage range. Of course, if you run a light or a few other features, that wattage number will go up at least by 25 more points.

For other Brother machines you may be looking at 120 volts times .92 amps which will give you about 110 watts. The equation we gave you here works for every electrical device you own and is not created specifically for sewing machines.

Use a good calculator to help you figure out your answers as that is easier than doing the calculations in your head. 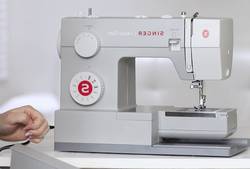 On the other hand, the computerized C340 sewing machine runs off 120 volts but only needs .46 amps giving you a total of 55 watts for the machine on its own. If you run other electrical devices at the same time then expect your wattage use to go up.

As you can see, different Singer sewing machines use different amounts of watts. That is going to be the case no matter which brand you use. Your usage will depend on how much you sew each day, week or month.

Having set sewing time is one way to keep your costs down if you are concerned about power consumption.

When you want to get off the grid and still do sewing, you will need an inverter to help bring the right electrical current to your sewing machine. The trick is to get one that will power your sewing machine while not under-powering it.

The good news is that there are lots of inverters available that are built specifically for sewing machines. You can find them on Amazon but they may be called converters there.

The bad news is that they come in a wide range of prices and all models are not that affordable. If you want to go solar power and run your appliances including your sewing machine, then you would need about a 600-watt inverter to handle that task.

Just make sure you have enough batteries on hand to handle the electrical input from a 100-watt solar panel. A sewing machine may draw about 88 watts. That comes from the experience of one person who traveled across Australia using her Bernina along the way.

The best way to get set up with an inverter and your alternate power sources is to talk to an experienced electrician. They should be able to put you on the right track and get you sewing off the grid in no time.

Sewing Machine That Doesn’t Use Electricity 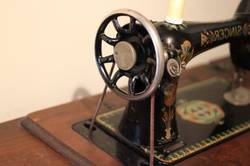 When you do not want to use electricity when sewing, you can return to the old fashion way and just take up hand sewing again. But this method can get tiring and hard on your eyes.

Fortunately, there are non-electric options. One such option is the old treadle machines. These antique sewing machines were built to last. Unlike modern machines that need to be replaced every half-decade, old-fashioned treadle machines still work even a hundred years after their original construction.

Also, these machines can be placed just about anywhere you want to sew. They can be set up and working in no time and fixing them when the machine breaks down is not that difficult.

The only downsides are that these old machines do not come with their original price tag. They may be a lot more expensive than a modern cheap sewing machine. The other downside finding one and getting replacement parts.

But if you want to save on electrical use, the treadle machine may be worth the extra effort. Another non-electric sewing machine model would be the old hand-crank versions.

These two were built to last but the downsides remain the same as the treadle machine. A little research may help you find a great non-electric sewing machine that will fit your needs.

On grid or off, the sewing machine does not use a lot of electrical power. Unless you have a machine with lots of bells and whistles you use all the time or you do hours of sewing each day.

Regardless, you would have to do a lot of sewing each month to equal the cost of modern-day professional sports tickets. If you are not sure how much wattage or power your machine consumes, then use either the link we provided to calculate or the equation we gave later on.

Both will help you see how much power your specific machine uses each time you sew. Sewing machines are not all the same and do not use the same amount of power. Or if you really want to save, switch to an old non-electric machine. They still do a great sewing job for you.