19 Different Types of Weave Patterns (How Many Are There?)
What Fabric Is Similar to Silk? (6 Silk Alternatives)
What Is Silk Used For? (12 Uses of Silk Today)

What Is Plaid Pattern? (Gingham Vs Plaid Vs Tartan)

Some plaid designs have special or heritage meanings and you would need to know the history of the family to understand the plaid design associated with their name.

What is plaid pattern? Plaid is comprised of long stripes running vertically and horizontally and intersect with each other forming both large and small squares. But the answer to this question depends on who you talk to as checked is not gingham and neither is tartan.

To learn more about this comparison just continue to read our article. Plaid seems to have an interesting history even though no one knows where it originally started. Take a few minutes and get caught up on this interesting topic. Plaid is not simply plaid when you learn the history.

What is a Plaid Pattern?

The plaid pattern has long stripes that go up and across a fabric creating little blocks where a myriad of colors can be placed. Usually, the colors are very organized and the plaid style doesn't contain 10 or more different colors.

What makes it difficult to define the plaid pattern is because there are 8 common patterns just about everyone knows or has heard about at some point in time. Those 8 patterns are-- tartan, gingham, check or checkered madras, windowpane, houndstooth, glen plaid (or the Prince of Wales check), and the tattersall pattern.

But there may be more patterns. No one knows how many patterns there actually are and while all plaids are checks, not all checks are plaid. This can make understanding plaid patterns a little confusing not to mention difficult.

Then the Tartan style of plaid may or may not be considered pla﻿﻿i﻿﻿d and are often referred to as Tartan patterns and not plaid patterns. Yet, in reality, Tartan is simply the woolen fabric style of plaid and used by the Scottish Highlanders.

Where did the Plaid Pattern come From?

According to the Smithsonian Magazine, plaid is not the original name for this pattern style. The magazine claims that Tartan was the original word used to describe this fabric pattern and that the word plaid replaced Tartan when the pattern became popular outside of Scotland.

The interesting piece of trivia is that the tartan pattern was found on a Caucasian mummy when the mummy was discovered in the Western Chinese Desert. The mummy is called the Cherchen Man and is dated about 3,000 years ago.

Between that time and the 18th century, there is little information on plaid fabrics and patterns. However, it was in the 1700s in Scotland that the tartan pattern became associated with different clans.

When the Scots rebelled against British rule in 1745, the Royal Highland regiment wore what is called the Black Watch tartan pattern which was not linked to any clan or family. This pattern was banned by the English after they triumphed over the Scottish but became a symbol of Scottish unity when the law was repealed years later.

When different Scottish citizens began to migrate to America in the 19th century approx., plaid became known in that country due to the exploits of Jock McCluskey, a descendant of the Rob Roy Macgregor clan, in both Canada and the American West.

His black and red tartan colors became known as the buffalo plaid. this is just one of the many stories of how plaid became popular in America.

Difference Between Tartan and Plaid

You may be surprised to find out that many Scottish people do not know the difference between these two patterns. But there is a difference and it is said that many websites get that difference wrong. It makes one wonder which description of the difference is correct.

That is the physical difference between the two patterns. The historical difference, for lack of a better term, is that the tartan plaid pattern is linked to different Scottish clans or families. Regular plaid is not.

To be a true tartan design, the colors and pattern must be recognized by the Scottish government. Plaid does not have to be nor doe sit enjoy such official status or recognition.

What makes this difference confusing is that both tartan and plaid patterns are made from the same materials and colors. The registration of the tartan plaid is what makes the two words different even though describing the same pattern style.

As you have just read, the two terms basically refer to the same pattern and the same type of material. There is really no difference between the two styles when it comes to physical properties. Just do not call tartan, plaid.

Fortunately, not all plaids are tartan patterns and can come in a variety of designs that sets them apart from that Scottish heritage. aside from tartan, there are at least 7 more plaid designs which we already listed above.

These designs set plaid apart from tartan patterns and give plaid a unique identity. Some of those non-tartan designs have a few subcategories to them like the checked option.

Plus, the different plaid styles do not all come from Scotland. The Madras version is said to have originated in India in the 1800s, with gingham starting in England at about the same time.

Houndstooth plaid has a controversial history with some claiming the style was made in Sweden as far back as 300 BC. Then others claim that this style of plaid is also of Scottish origin and dismiss the Swedish claims.

The Prince of Wales plaid is also from Scotland and the pattern appealed to the 19th-century titleholder, Sir Edward VIII. 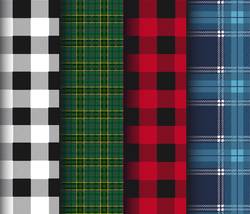 What makes people think that gingham is not to be included in the checks is the transparent squares found in this fabric. Also, the squares are bigger on gingham fabrics than checked ones.

The Graph check design got its name from school graph paper and is usually made with white and blue lines. Finally, there is the Gun Club check which also originated in Scotland and was used to identify the gun club.

There are two of the other plaid designs that could be considered check patterns. the window pane and the tattersall with the former looking like a larger version of the graph check design. The tattersall originated in London and is a basic design and is linked to the horses of the tattersall market. 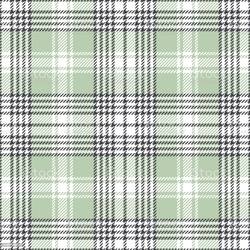 We briefly mentioned gingham immediately above as while it is a plaid design, some people consider it a check plaid pattern and not one that would resemble other plaid patterns.

The reason they consider it a part of the check plaid family is that all the squares are uniform. As you have just read, the purists feel that the transparent or lightweight, light color squares set this material off from the others making it different than accepted check designs.

This fabric was first made in Manchester, England, so the story goes, and in the mid-1800s. The light-colored squares come from the weave pattern helping it to be unique from other plaids that have a similar design.

The larger size of the squares is another reason why gingham is not included in the check family. However, we saw some members of the check family having fairly large squares themselves so this is a weak distinguishing point.

The smaller-sized squares on some check family plaids can be a bit hard on the eyes when looking at it directly. Gingham is very distinct from both the windowpane and the tattersall designs giving it a better identity and making it easier to find in a crowded fabric store.

When it comes to identifying different fabrics or patterns, it can be a difficult chore. One definition of plaid is that it is a pattern and not a fabric, while a flannel is supposed to be a fabric and not a pattern.

This doesn't stop people from thinking flannel and plaid are the same things especially when the flannel fabric is given a plaid design. Also, plaid patterns can be placed on a variety of different fabrics, and flannel is generally made from cotton or wool with some exceptions.

Then you can get flannel in solid colors with no pattern attached to it. Plaid is never one solid color. There is always a design to the pattern and those designs are well defined and very well known.

Also, flannel is said to have originated in Wales, not Scotland, back in the 1600s. Over the centuries the fabric changed from being made from wool to cotton, silk, and some synthetic fibers.

Another difference is that plaid patterns do not provide any warmth or any other positive characteristics. Flannel is said to be soft, warm, comfortable even when a plaid pattern is placed on it.

Because plaid patterns are placed on flannel shirts, many people think the two fabric items are the same thing. The flannel will keep you warm but the plaid will have you looking good.

How to Make a Plaid Pattern

If you want to know how to make a plaid pattern for fabric from scratch, you would have to talk to a master weaver and learn their techniques. That is not an easy thing to do and would take up a lot of your time unless you enjoy weaving.

Being able to weave is a nice talent or skill to master and something worth considering if you get bored during the day. But there are easier ways to make a plaid pattern and it doesn't include using raw fibers to do it.

For baking a cake, you can use food coloring and pick the colors you want on the cake. You may have to make different batches of icing to get the different colors and then work patiently to apply those colors.

Or you can go to the computer and use special programs like Silhouette, Illustrator or the one on this website. There are plenty of online tutorials that will guide you through the process and how to apply your design to whatever project you have in mind.

if you want to draw a plaid design the old fashion way with pencil and paper, you will need a ruler and have the patience to make marks for both thin and thick lines going vertically and horizontally. Check this link how for specific instructions.

The history of plaid is an interesting one and at some points, it is controversial as well. But plaid is a nice design to use on many different sewing projects as they help the person stand out when in a crowd.

Plaid certainly doesn't make a person look bad but can complement their hair color, their eye color, or their figure. Plus, it is a good pattern to use when you are proud of your family heritage.

What Fabric Is Similar to Silk? (6 Silk Alternatives)

What Is The Texture of Silk? (Silk Texture Seamless)