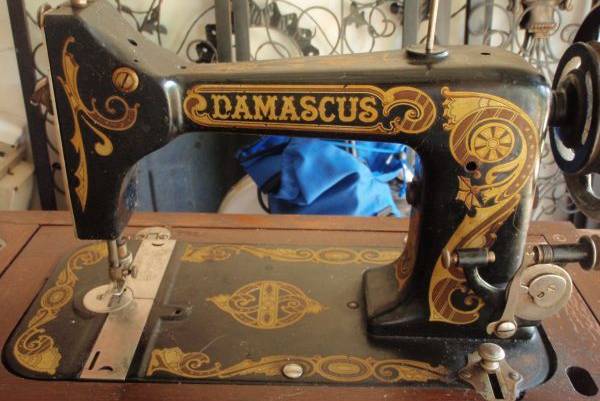 Who Made Damascus Sewing Machines? (History and How-To Date)

To learn more about the Damascus sewing machine and all its details, just continue to read our article. It has the data you need to know about this machine and gives you the potential value of your model.

This machine was designed to use a vibrating shuttle and was often decorated with gold highlights to make it look more spectacular. It came in various designs alternating between 6 different treadles and also a full cabinet version.

You may not want to know the price of the full cabinet version but we will give it to you anyways. It cost just $23.95 for the stock version of the Damascus sewing machine. The Damascus Grand Rotary machine cost $25.95 for a 6 treadle model and $29.95 for a full cabinet.

What made the Grand Rotary model so famous and prized was that it took 1/3 of the sewing time off. In other words, it sewed faster than other machines. The Montgomery Ward catalog raved about this machine so much that the company had to put a disclaimer in the catalog.

The disclaimer stated their praise for the Grand Rotary did not overshadow the perfection of their other Damascus sewing machines. When the sewing machine arrived at your home you needed a couple of people to carry it as the device weighed 160 pounds.

Who Made Damascus Sewing Machines? 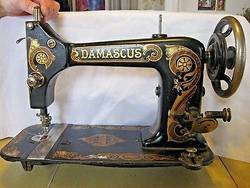 The National Sewing Machine Company was responsible for producing the Damascus sewing machine. That company’s history starts Barnabas Eldredge who worked for the Ames Manufacturing Company of Chicopee, Massachusetts.

When F.T. June died in 1890, Mr. Eldredge took over the company and renamed it the National Sewing Machine Company. He stayed at the helm of this company until he passed in 1911.

In 1953 another merger took place with National joining forces with the Free Sewing Machine Company but retaining the National name. But the company’s fortunes did not last long as Japanese competition and other foreign companies were too much for National.

National closed its doors in 1957. During its lifetime national manufactured sewing machines, washing machines, bicycles, an automobile, home workshop machinery, and cast-iron toys and novelties. The latter two were made under the Vindex Toy Company brand.

It seems that the Damascus sewing machine had a fairly long existence. Without actual records, it is hard to say when the first one was produced but it seems to be made in the late 1800s, around 1889-90, and sold directly to Montgomery Wards right from the start.

One 6 drawer treadle machine with full cabinet was made in 1918 and another was made in 1926. That gives you an idea of how long the machine was n production. Somewhere around 40 years for the single model.

But it was an instant classic and Montgomery War retailed a winner right from the start. According to our research, this was the machine to own in the early 1900s and today Damascus Grand Rotary sewing machines still work and are highly treasured by their owners.

Even at that time, the machine was sold around the world as it was one of the best sewing machines made in that era. The Montgomery Ward’s catalog stated that you could not find a better machine anywhere than the Damascus Grand Rotary.

They said that at the risk of hurting the sales of their lesser Damascus models. They must be top vintage machines for even 90 years later some models are still in great working order. 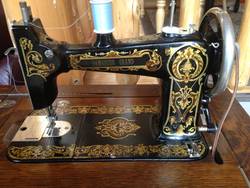 This may be sort of a challenge as the Damascus sewing machines did not display their serial numbers. That is the best place to start when dating older machines. But not all old machines displayed a serial number and you may have to go by the model number instead.

Or as one expert stated they needed to see a picture so they could determine which model it was before they could place an age on it. That may be the only way to get an approx. Age on any Damascus machine. Once in a while, you will find one that comes with its original paperwork that includes the date of manufacture.

That date would be on the original warranty if you have that as well. Sometimes you can date the sewing machine by the color of the wood used in the base or cabinet or if chrome was used or not. Lightwood and chrome usually were used in the 1950s.

The ornate metalwork, size, and design of drawers would be another way to date a sewing machine. If the cabinet was really ornate then it may have come from the 1910 decade. Fiberboard would place a cabinet and sewing machine to the 1960s.

According to one source, if your Damascus sewing machine has a serial number it will be located on the machine near the left steering lever. It may be on a badge near the seat or it may not be on the machine at all.

We looked at one 1925 manual to see if it had the serial number included in its facts about the machine but the number was absent from those pages. Your search for the serial number shouldn’t take long as there are only a few places it could be placed.

Normally, the serial number would be on the bottom, the back, or the side of the machine. Once you get the number you should go to an antique dealer to see the value of the machine. The dealers should be able to get a good date for production as well as let you know the value in the same trip.

Just so you know, the old manual we looked at did not have a model number to it which allows one to speculate that the Damascus sewing machines were not produced in a wide range of designs. 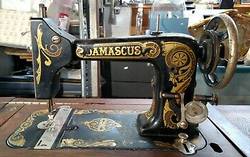 As we just mentioned we were able to read one manual for a 1925 Damascus sewing machine. It is quite clear and the words are easy to read. You can find that manual at this link and it is quite informative.

At our usual go-to sources, we found one manual for a national sewing machine and you can check it out at this location. Then there is only one at eBay and you can see it at this link.

While the Damascus sewing machine may be running almost 100 years after it was first made, the same cannot be said for their owner’s manuals. Those booklets may be a treasure if you can find them.

Check with antique dealers and where old vintage sewing machines are sold. Those companies may have a supply of old Damascus sewing machine manuals. Or they might have a better idea of where you can find one.

Hunting one down may be like going on a treasure hunt but gold and silver will not be your reward if you are successful. We did find a few more on this internet website. That tells you that an in-depth search on the internet may turn up a few more locations for you.

Value is in the eye of the person spending the money. The one selling the machine may have a different idea of the value than the one wanting to buy the sewing machine. Collectors and antique dealers are notorious for underbidding on old machines like the Damascus as they would like to earn a little money as well.

One expert at valuing old sewing machines placed a working Damascus sewing machine in its original cabinet and in fairly good shape between $100 and $125. If that sounds low, you should get a second opinion to make sure he or she is correct.

That expert placed the blame for a low price on the shipping charges cost. Shipping is high at times but does not take away the value of the machine. It is a separate expense. One thing is for sure, any damage will lower the value of your sewing machine.

Also, if your machine does not work then it will also go down in value. These factors play a large role in how much someone will pay for your sewing machine.

How to Thread a Damascus Sewing Machine 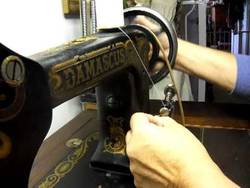 The instructions for threading a Damascus sewing machine comes from the 1925 manual that we linked to already and were able to read. The good thing about this machine is that you could thread it with the presser foot raised or lower.

But for the first few times, you thread the machine you should start with the presser foot in the lower position. Next, you put the spool of thread on the spool pin and pull the thread end to the left in front of the needle bar.

Once that is done, pass the thread through the guides on the faceplate and the needle clamp. At this point, turn the hand wheel so the needle is raised to its highest point and go left to right through the eye of the needle.

Now pull about 2 to 3 inches of thread through the eye and then turn the hand wheel towards you. The needle should go down to its lowest point and return to its highest position. This will enable the needle to pick up the lower thread and get it ready to sew.

At this point, you place both threads under the presser foot and close the slide plate. You are now ready to sew with your Damascus sewing machine.

Where to Find a Damascus Sewing Machine

If the antique shops and eBay do not have these sewing machines then your best bet will be auction houses, estate sales, garage sales, and the classified ads. Craigslist and other online classified websites may be a good location to look through to see what is available.

Since these are generally older machines and the company is out of business, finding a good Damascus sewing machine is not always going to be a walk in the park. It may take some time to find one in working condition and when you do your next worry will be spare parts.

The Damascus sewing machine may be the find of the century if it is in working order and good condition. They were well made and touted to be the best sewing machine made back in the day when men took pride in what they created.

Threading the machine does not seem to be too complicated so after a couple of minutes, you should be good to go when it is time to start sewing. Check one out today if you still can.