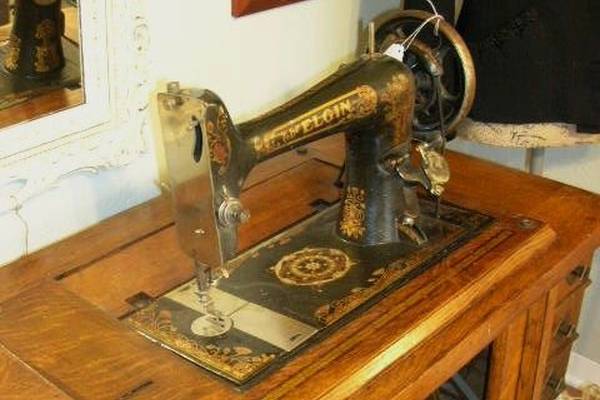 In the late 19th and early 20th century, it seems like just about everyone wanted to make life easier. From its inception, the sewing machine was seen as an appliance that made home life easier.

To find out more about this sewing machine just continue to read our article. The vital piece of information is that the Elgin sewing machine was original for only a very short time in the 19th century. After that, it was just a model name on other companies’ sewing machines. 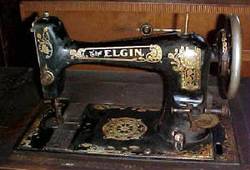 There is very little to be known about the original Elgin Sewing m=machine company. It started in 1896 and went to 1898 where the company changed its name to the Elgin Sewing Machine and Bicycle company.

That name change lasted from 1898 to 1899 when the company is said to have closed its doors for good. Any other machine named Elgin was made by either the Free Sewing machine company or the national Sewing Machine company.

Those two companies put the Elgin name on the badges of different sewing machines. Janome bought both companies around the late 50s early 60s. So the more modern sewing machines are not true Elgin models but could be named that way to honor a company that did not last in the industry.

There is an antique Elgin treadle machine still around. How many the company made is not known. In a strange twist to their story, this company produced 120 new motor cars with 5 being electric. In a further twist, the department store Montgomery Ward bought those electric cars for resale through its catalog.

After that, the company drops out of sight.

Who Made Elgin Sewing Machines?

Exactly when National or the Free Sewing machine companies made their Elgin models is not exactly known. They did produce them for a while and you can find vintage machines at different locations on the internet.

The two companies merged in 1953 and eventually wen tout of business in 1957 or were bought by Janome at that time. There seems to be a vintage 1960s Elgin on eBay so Janome may have continued selling and making that model for some time after they bought out National.

There was a time that the Elgin name was used by the Standard sewing company who distributed sewing machines made in Taiwan. That was around the 1960s and there may be more to that story that hasn’t come to light yet. 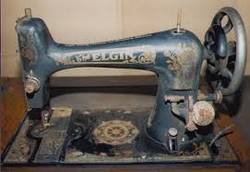 What is known about this company is that it made cars, bicycles, and sewing machines for about 3 years. If the historical record is correct it went out of business trying to move to New York in 1900ish.

The company produced at least 120 cars but there is no number put on the different sewing machines it manufactured. As for bicycles that is as deep a mystery as the sewing machines.

History has a way of weeding out the weaker businesses and letting the better ones survive longer. Elgin was a member of the former group as it did not have the right location for its inventions or products.

The one treadle machine that we have been able to come across is retailing for $390. it comes in good shape, and has its own cabinet and looks quite nice. There was one vintage Elgin sewing machine from the 1960s on eBay but it was selling only for $80.

If it was the last stage, then you may be looking at a Japanese built or Taiwanese built sewing machine and those do not hold their value. Of course, condition, working order, and what accessories are still with the machine will help boost the value. 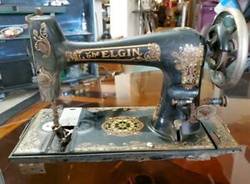 This may be hard to find because not everyone sells their vintage or antique sewing machines at the same time. Some times the buyer has a boom season where it seems everyone is selling their Elgin sewing machines. Or it is famine and no one is.

Right now only 1 showed up at eBay and one through a private sale at a Craigslist website. The latter one comes with a 6 drawer cabinet and fold-out sewing table. Check with Craigslists to see if there are more or your local classified sections.

So far we have found 2 serial numbers, one is listed as #C69624 and may be for a Japanese or a National badged Elgin sewing machine. The other one is # T099880 and comes from an original Elgin treadle sewing machine made in 1896 or 1898 or somewhere in between.

2 more serial numbers have popped up and the third is 82324 which is said to come from the 1960s which would put it in the Japanese or Taiwanese era and the fourth is 513158 which may put it in the National Sewing Machine company era or the Japanese.

It is hard to say as no further information was given about that sewing machine. There is no list of serial numbers to be found anywhere and with the original Elgin company out of business, their records are certainly lost for good.

You can try and check with Janome but that may be a stretch as those records from 60 years ago may not have been kept either. 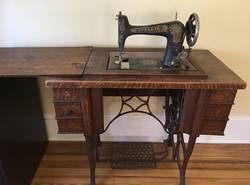 The definition of antique for sewing machines is that they were to have been made prior to 1900. That means that the original treadle machine produced by that company and any other models would be true antiques.

Unfortunately, we have seen only one original treadle machine and it is selling for almost $400. it is safe to say that many of the original Elgin models did not survive after the company went out of business. The main reason for that would be that there were no spare parts made to fix those originals.

Any other badged Elgin sewing machines would be known as Vintage but then some may be classified as antique as not everyone follows the rules. The next oldest Elgin machines would be badged somewhere in the 20s to the 60s before Janome bought out National Sewing Machine Company.

Again, the records of the national and the Free sewing machine companies are probably lost or well stored out of everyone’s reach at the moment.

If you want to see an Elgin 2468 sewing machine you can click on this link and be taken to a web page that has some excellent pictures. If you go you would see a very clean machine that looks like it was made in the 1960s and not from an American company

It comes with spare parts, a manual, and even accessories so this may be a steal at $70. The dials are all front and center, easy to use, and still has its carrying case. Even at that age, it looks like it can still sew up a storm as long as you keep it serviced and well maintained.

Seems to be one of the zig-zag models that one of the later companies produced. It had different sized zig-zag stitches as well as other stitch selections you could choose from.

The machine looks like a nice compact that will not take up a lot of room on your sewing table. Plus, it takes organ needles sizes 80/12, 90/14, and 100/16 which gives you a good supply of needles to work with when you can’t find the one you want.

The good news is that there are still parts available for this machine. The bad news is that you may have to contact a shop in England to get them.

This model is more modern than it is vintage and the same story for the last model applies to this one. Parts are still available and found in England. The needles it takes are the 80/12, 90/14, and 100/16.

The many dials on this model allow you to select your favorite stitch, check the tension, and do other sewing tasks you need doing to create the perfect garment or other sewing projects.

In looking at the parts, most of them are metal with a couple adding a little plastic to their design. That means that this machine may last longer because it is not filled with too much plastic.

We could not find anything on this Elgin sewing machine. All that means is that no one is talking about that model and maybe for good reason. It was not a great sewing machine or it just was not a fan favorite.

Another option could be that very few of this model were made and no one knows much about them. That could be that it was overshadowed by the original Elgin sewing machines when they popped up or by the other badged Elgin models that had more features and functions.

We tried several search options to no avail. If you find one it may surprise everyone and be a very good machine. The value is not going to be there and if you play more than $50 you may be paying too much. 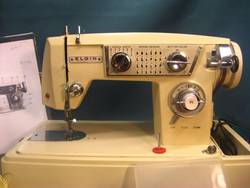 The lost story of the original Elgin Sewing Machine Company intrigues us. There must be more to what went on than is being recorded. If the company could make bicycles, sewing machines, and cars, including electric models, there has to be something about that company and its owner that made them special.

History doesn’t always care about who is or isn’t special. It cares about those who can record it properly and let the future know what exactly took place in those early sewing machine eras. No one seems to care about the original Elgin company.

There may be only a few original Elgin sewing machines left in this world so you may have to be satisfied with the more modern versions. They are good machines for the most part and thankfully, you can still get parts for many of the more recent models.

That makes owning an Elgin worthwhile. Of course, if you can get your hands on an original by all means do it as those machines were one of a kind.