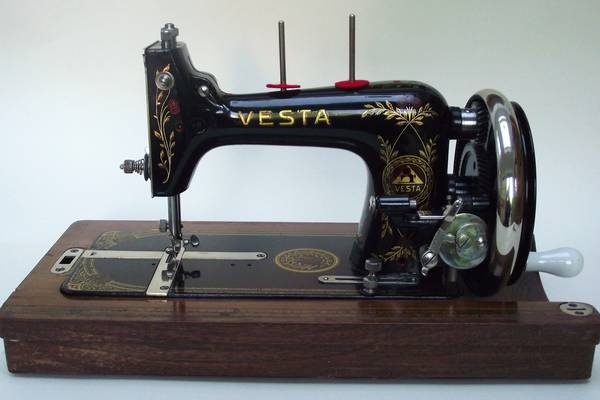 When you want an antique sewing machine, there are plenty to be found in Europe. A lot of great sewing machine companies got their start on that continent and spent a lifetime selling their machines there. Sometimes they were not exported to the other continents in great numbers so you may have a hard time finding this one where you live.

The sewing machine company was originally called Dietrich & Co. Even though it was founded in 1871 by three men, L.O. Dietrich, H. Kohler, and G. Winselmann, in Altenburg, Germany. The latter two men left the company in 1877 to form their own and L.O. Dietrich changed its name in 1904 to Vesta when Mr. Dietrich died that year.

To learn more about the Vesta sewing machine company and its history just continue to read our article. Inside this article is all the information you need to know about Vesta and how it progressed over the years. The company lasted only about 70 years in total.

The interesting fact about L.O. Dietrich, H. Kohler, and G. Winselmann, was that they were all locksmiths and worked at the Clemens Muller Sewing Machine Factory in Dresden when they got the idea to start their own company in 1871.

Their first model, the Allemannia, was produced in January of that same year and by the end of 1871, they had made about 300 machines. By 1880 the company was making about 12,000 sewing machines a year even though they had to move two more times before they found the right location.

Each of the founders became giants in the German sewing machine industry and each of the three eventually started their own companies. Unfortunately, in the beginning, those men could not design their own machines but copied the Singer models that were available in their country.

The new name of the company came from the Roman goddess of the fire and the hearth. That seemed appropriate for making sewing machines. Sadly, it was the Russians who brought the Vesta company to an end in 1946. They dismantled the factories and took the machinery back to Russia with them. It was part of the war’s reparations for them.

How Old is My Vesta Sewing Machine?

If you come across a Vesta sewing machine it is not going to be younger than about 80 years of age. That is approx. date because after the war the company was supposed to have started back making sewing machines but little is known of those devices.

It is said that Kohler & Dietrich came together again and became VEB Naehmaschinenwerke (VEB Sewing Machine Works) in 1948 so you may have a Kohler sewing machine and not a Dietrich model. In the early 20th-century sewing machine patents started to expire allowing other companies to use the designs of their competitors.

This trend had the old sewing machines looking like each other making it hard to tell who made what machine without looking at the badges. The Vesta Saxonia TS was made in 1924 making that machine almost 100 years old.

There were no new sewing machines made from 1940 until after the war so none of the Vestas you may own will date to that period. A 1930s Vesta came with a wood base with elaborate inlay design. Then the Sylvia dates to the 1930s as well.

The best way to date the Vesta sewing machine is through its model name. There were the ones mentioned above and a couple of others were named the Titan and the Trojan. There is no time frame given for those models but the original sewing machines of the 19th century from this company were Family A and Family B along with Universal No 1.

The Saxony series had models E, F & G along with CE and CF and should have been produced in the 20s as well as the 30s of the last century. The best you are going to get will be approx. dates because it seems that the Russians destroyed all records when they dismantled the companies after the war.

Or you can get lucky and find an old advertisement which gives an approx year for production. One example is Model 5 which was made in about 1890. The Sylvia model was made in 1900 approx and on it goes.

There are no records to compare serial numbers and these machines did have those, even the early models. Other than these options you can check with an antique dealer and see what information they have on Vesta sewing machines.

But with no records to work with, it will be hard to pin down the year of manufacture. The company had produced about 1 1/2 million by the time 1925 rolled around and they were making about 100,000 machines every year.

Then with rumors of war circulating through the nation demand for sewing machines decreased and fewer of them were made. 1935 saw the company adding munitions to their product line up and by 1940, Dietrich had switched to ammunition production only to help the German war effort.

Another problem with going by serial numbers is that it is uncertain all the models the company made. One example is the Mercedes. It is said to be made by the company but that conclusion is only drawn because the machine looks similar to a Dietrich sewing machine. The thing is there is no Vesta name on the badge or other parts of the sewing machine. 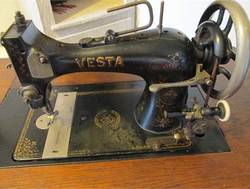 The first place you can try has a free copy online and easy to read. You just scroll down to get all the information you need. That manual is for the Vesta Cylinder Shuttle Sewing Machine and you can find it at this link.

Finding manuals for the Vesta is not going to be an easy task. The first 20 years of production, the machines were clones of the Singer models and you might be able to find some of those to help you thread, fix, or maintain your Vesta sewing machine.

This British Company has 2 manuals on sale and they go for only 4.95 BP. You can try and contact them to see if they have any European leads on where to find old Vesta manuals. This link may be one of those leads as it too is a British company that sells different manuals to those people who lost theirs or had theirs destroyed.

That last British company seems to have a manual for just about every sewing machine company that ever existed. One thing is for sure hunting down old sewing machine manuals can become quite a treasure hunt. 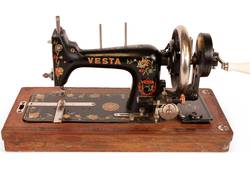 This can be anyone’s guess. eBay has only 2 models for sale right now and the prices are marked at $200 and $400. Both those machines come with key accessories and boxes and provide you with an idea of what you may get when you try to sell your Vesta model.

Then to find a more accurate value you really need to visit one of two places. The antique dealers who know something about antique sewing machines and those vintage sewing machine repair businesses who also sell those old machines.

They will have the best information on setting the value to your model. If you live in America, you may get a higher price for your Vesta simply because it may be rare in that country. European prices may differ because this was a German machine marketed to different European countries like Great Britain.

Try to remember that sentimental value has little influence on the actual value of the machine. When setting your price make sure to include condition, working order, accompanying accessories, cabinet or case, and little factors like the number of machines made and available. 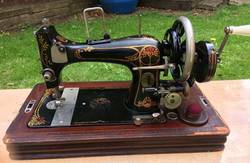 While eBay seems to have only 2 Vesta sewing machines for sale, this company has quite a few on hand. They use eBay which raises the question of why these models did not show up on an eBay search. The prices at that link, range from $20 to $200 approx with the most around $50. They even have a tin filled with accessories they will sell you.

The interesting fact about the 2 for sale on eBay is that one comes from Hungary and the other from Belgrade. So looking at European stores, antiques, etc., may be your best bet to find what you are looking for.

There is one for sale at this link which tells you that you may have to search individual stores either online or in-person to find a Vesta sewing machine. With an estimated over 2,000,000 Vesta sewing machines made over the years, it is highly likely that you will find one somewhere.

You are just going to have to put a little effort into your search and be a little flexible in brainstorming places where they might be found. Don’t forget to check classified ads or Craigslist or save yourself some time and effort by putting out a wanted ad.

How to Thread a Vesta Sewing Machine

The instructions for threading an old Vesta sewing machine are for the Cylinder Shuttle model and diagrams to help you can be found at this link. The instructions include numbers so you will have to check the diagram to see exactly where the thread goes.

Make sure the presser foot lifter (E) is up when you do all of this. The Vesta sewing machine seems to be an easy machine to thread in comparison to other sewing machines. Then the instructions for threading the cylinder shaft are right below the section on threading the upper thread.

You should have an easy time of it as the instructions are very easy to understand and follow.

For the machine used as an example above, the needle you are looking for is a flank shaft needle and it is the only one designed to work with that model. You put the long groove side facing you when installing it in the machine.

For a Saxonia TS, you should use a 12 x 1 needle. That is the size the machine was designed to work with. However, you can get away with the DB x 1 but it may be a little long and not fit as accurately or securely as the 12 x 1.

For other models, you may have to do some research or contact sewing machine repair shops to get the right size for your old machine. Universal sized machines are a possibility but get an experts’ opinion before you buy.

The Vesta seemed like a good solid machine when it was in production. Unfortunately, the company was located in the wrong country and may have survived if it was founded in one outside of Russia’s reach.

Who knows what could have been achieved if the company was in Sweden, Britain, or even France.