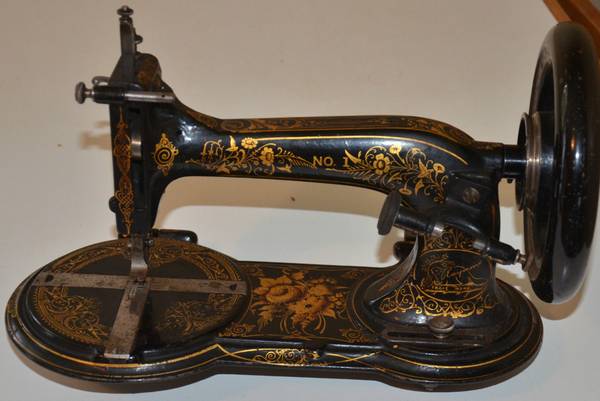 If you want beauty you may have to look for an old Raymond sewing machine. They were a work of art and hand-painted to separate those models from the competition. They were also designed in a very exquisite fashion making them ornate and something good to look at.

The story of the Raymond sewing machine may be about the man and not the machine. He received his first patent in April of 1857 and his second in October of that same year and his sewing machines were made from about 1858 to 1922.

To learn more about the Raymond sewing machine just continue to read our article. It searches the documents that can be found to provide you with the information you need to know about this beautiful sewing machine and the company that made them. 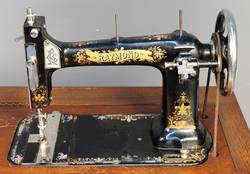 It seems that Charles Raymond was born at the right time. His birth was documented as 1826 which allowed him to grow up when the sewing machine industry started in America and became very popular as well as lucrative.

Mr. Raymond wanted to be in on those aspects of manufacturing life so he used his machinist training to help him design some very good sewing machines. When the sewing machine industry started to flourish in the 1840s and 50s, Mr. Raymond was one of the pioneers although his company did not begin until his partnership with William Nettleton.

Mr. Raymond tried to market a single stitch sewing machine in 1852 but ran into some tough opposition from Mr. Singer and he had to delay marketing his machines until much later.

The two men started in Bristol Connecticut and later moved to Brattleboro, Vermont where they made and marketed the smallest and cheapest sewing machine that was about 1/10 the cost of a Singer model. Their first machine sold individually for $14 and less if you bought more than one.

The trouble with the so-called kings of sewing machines led Mr. Raymond to shut down his American sewing machine factory and relocate to Canada. He first went to Montreal but that was not a successful move and he lost a lot of money.

He finally decided on Guelph, Ontario and he became one of the largest employers in that city. Eventually, he retired in 1897 but the company soldiered on under different leadership. In 1916 it was sold to the White Sewing machine company who continued making Raymonds until about 1922.

If there was ever an example of persistence, Mr. Raymond was it. He took a lot of hard knocks during his sewing machine career and those battles came from his competitors like Mr. Singer who wanted to keep smaller manufacturers from becoming to large.

Despite the business hardships, Mr. Raymond always found a way to keep his company operating. When a patent fight rose, he analyzed the lawsuit and found that it did not pertain to his patents in Canada. So he packed up and found success over the northern border.

It was in 1861 when this move was made and it is possible that the partnership between the Mr. Raymond and Mr. Nettleton dissolved. At least there is no mention of the latter partner in any Canadian records.

The tragic event that helped the Raymond company to succeed was the American Civil war. As his American counterparts suffered he was able to get many worldwide patents and increase his business.

Another part of the company’s success was its ability to make sewing machines and sell them at a fraction of what the consumer would pay for a Singer or other top American sewing machine at that time. 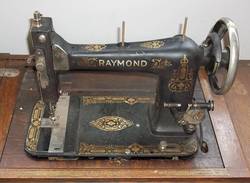 This can be done in several ways. First, the company produced different models under some unique names, and finding when they were made, you can date your Raymond sewing machine.

Some of those model names were No. 1, Raymond, New Raymond, Chas Raymond, Canadian White, Eaton, beaver, Victor, models M, C & H, and a lot more. The Raymond machines made in Canada can be dated between 1861 and 1922 while the early American machines from 1858 to 1860ish.

Most of the other models received a serial number and you can date them through that if you can find any records for those sewing machines. You can try the Raymond Sewing Machine Research Project to help you date your personal Raymond machine.

Many Raymond models come with serial numbers. On several, you can find that number on the top of the base on the front right-hand corner near a couple of the machine’s knobs.

The serial numbers were often placed in different locations with the back top corner of the base being one and the needle bar and presser bar being others. There is no real rhyme or reason behind the format of those numbers.

Some came with prefixes, some with suffixes, and some without either. The Economy model always had an ‘A’ as a suffix while other models had letters and numbers. There may be some aids you need to use to read those numbers as they may have worn out over time and be hard to read.

To learn more about this use of serial numbers just click on this link. 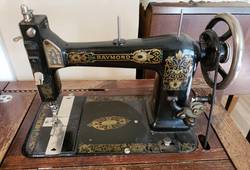 There does not seem to be a good source for Raymond sewing machine manuals online. The best place to find some is at this link. Unfortunately, most of the manuals are from 1900 onward to 1922 and only about 1 is from 1885.

With both Raymond and White out of business, it may be difficult to find any. But the machines were mostly made in Canada so you may try searching there or in Britain and other European countries as Raymond shipped their sewing machines around the world.

Or try a variety of antique or vintage sewing machine repair shops. They may have some or a line on where you can get them. Our regular go-to sources for manuals had no listing for any Raymond model. None appeared under the White name either.

The Raymond Sewing Machine Research Project does not dabble in estimating the value of these old sewing machines. While there is little known about how many machines the Raymond company produced before 1861 and well into the 1860s there are some models that may be considered rare and worth a little money.

Another factor in the value is that the company did not produce as many sewing machines as its bigger competitors. Also, the idea of value is very subjective and you may get more for your model while a friend may get less for the exact same machine. If you find the right one, like the chain stitch hand crank you may get around $1,000 to $1,500 for it if it is in good condition.

Other Raymond machines may go for as little as $50, depending on the condition and if it works or not.

Where to Find a Raymond Sewing Machine for Sale 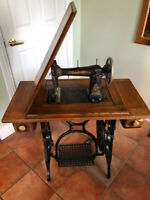 The first place to look would eBay. It has a few models for sale but you should be seated before you start your search. As we stated earlier, some of those machines are selling for over $1,000 in that marketplace. One with a cabinet goes for around $260.

Another place to look would be Kijiji up in Canada. Their website has several Raymond machines and they are more modestly priced. The good thing is if you use American dollars or the British pound, you can save even more money because of the advantageous currency exchange rate.

Then you can scour the vintage sewing machine shops or antique stores that populate the nation. There is always a good chance you will find a Raymond in those locations. Just do a thorough search and you should be able to find some mentioned at Craigslist, classified ads or even family friends, and so on.

The company may not make as many sewing machines as its competitors but some models were mass-produced and should be still available.

In comparison to some top modern name brand sewing machines, the Raymond company did not survive for long. But while it was in business it did produce some great sewing machines. They even looked beautiful with their hand-painted designs.

If you get your hand son one you should be owning a very good sewing machine that comes with a lesson in persistence.