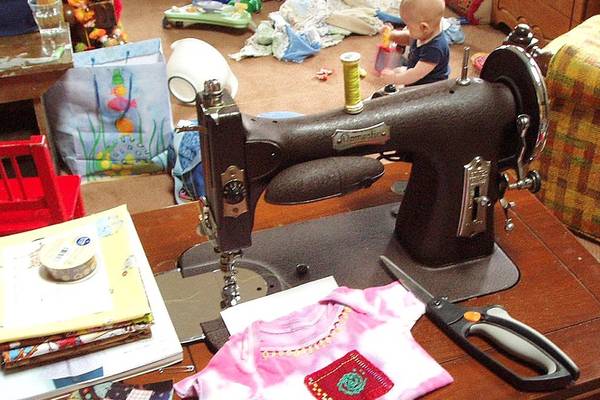 If you do not worry about the dates, you can learn a lot of facts, including the stories behind the different sewing machines. The Domestic story is interesting because it involves brothers with one being a Civil War veteran

These machines were made by Domestic and they were copied by lesser-known sewing machine companies trying to make a name for their products. The 153 was made with magnesium to reduce the weight and make it easier to move.

To learn more about these two machines and the company that made them just continue to read our article. It has a lot of information you need to know about if you own or want to own one of these top sewing machines.

In 1861 William Mack founded the William A. Mack & Company sewing machine manufacturing business. He started the company with N.S. Perkins and after the war, they were joined by his Civil War fighting brother Frank.

The men seemed to have a very good talent for making good sewing machines as in 1861 the company got the first US patent for a vibrating shuttle machine. Their models started to sell and by 1871 they had sold over 10,000 machines in a year.

The following year, they sold over 40,000 units. The brothers continued with Domestic until 1884 at which time they started the Standard Sewing Machine Company. Domestic relocated to New York and had influence over the sewing industry until it was bought out in 1924 by White.

The Domestic 153 and 151 were the product of the White Sewing Machine Company who continued to use the Domestic name as a separate brand. 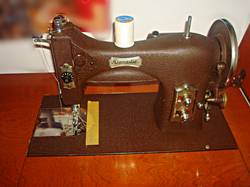 This is one of the problems with history. Sometimes the facts are lost to time due to a variety of reasons. It is possible that the 151 was made between the 1930s and the 1950s but that cannot be confirmed. If it was made during those years then it was a White sewing machine and not a true Domestic.

Domestic did make sewing machines for Sears in the early years of the 20th century but that model was called the Minnesota. The Franklin, Minnesota, and the VS models were the ones to have lasted the longest from this original company.

The domestic models were usually given names like the King or the New Domestic along with the Franklin and the ones already mentioned. The first machines were labeled with numbers and then letters but no mention of the 153 or 151 in any history of the company.

This is a bit confusing as it is hard to find serial numbers for the true Domestic sewing machines. We wrote about this problem in our Domestic Sewing Machines History article and there is no new information coming to light between then and now.

Since the White Sewing machine Company bought Domestic in 1924 it is more likely that you will find the serial numbers in their company’s records if they still exist. While White owned Domestic, they kept the manufacturing plant in Cleveland, Ohio, and also continued using the Domestic brand name.

If you want to find the serial number on your Domestic sewing machine look at the bade under the hand wheel at the right of the machine. There is one number listed there that could be the serial number.

But without the records of those serial numbers, there is no way to verify that conclusion nor to date the sewing machine. 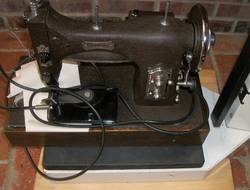 As you know the value of anything is very subjective. A dealer or collector will low ball the value and once you agree to a price will turn around and sell it for the true value of the machine.

One expert quoted the current market value as being between $175 to $225 but we saw one #153 selling for $390 on eBay. The price you will get will depend on the condition of the machine, if it works or not, and if it comes with a cabinet or not.

If in top shape and still runs then you can try to set a selling price close to that high eBay figure and settle for the lower current market value without feeling bad about the deal. Then if you are a motivated seller you can always take whatever is offered to you and be grateful that someone wants the old machine.

The same story is going to apply to tall the Domestic sewing machines. Of course, if you find an original like the Minnesota, Franklin, or those with the numbers of letters on them then you may have found a valuable machine.

It is hard to find those old sewing machines as they disappear quite quickly as the years pass. Most have most likely been used for spare parts and that is where you are going to find the greatest value in these old machines. You should make more money selling the parts than you would the fully assembled sewing machine.

The reason for that is most Domestic sewing machine owners need parts and not a fully assembled sewing machine. No matter which mechanical product you own, parts have always generated more money than the product itself.

Even products like cell phones follow this pattern as the batteries alone can cost more than the phone does. 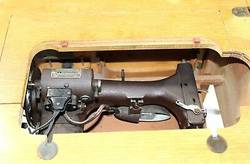 It may be difficult to find these machines and their manufacture date but finding parts is not going to be that hard. There are lots of parts for sale on eBay at the time of this writing. Just type in Domestic #151 parts and you should get a lot of them showing up on your screen.

The same will go for the #153 sewing machine. You can check this website out as it advertises parts for both models. Then instead of using the Domestic name, you might have good results if you used the White brand name to find those dealers who have Domestic #1511 and #153 parts.

In a generic search, you can try the people found at this link as well as this one. They both claim to have thousands of parts for all brands of sewing machines. Then check your local sewing machine repair shops as they will either have a lead on parts or have some they can sell you.

We did find several places where you can get a manual for the #153 and possibly the #151 but the latter is harder to find than the former. The first place to look is at this link and you do not have to buy it to read it. You can get all the information you need by scrolling down.

Then over at eBay at the time of this writing, you can get one manual for the #151. Just click on this link to see if it is still there. This link gives you about 4 pages of the manual and it is the one we will use to provide some threading instructions in the next section.

Finally, this link has one for the #151 sewing machine and it costs $5 just for the download alone. You also may have better luck finding manuals for both sewing machines using the White name in your searches.

How to Thread a Domestic Rotary Sewing Machine 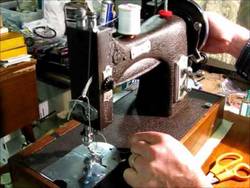 As we said, we will paraphrase the threading instructions as this link provides the specific information you need as well as the all-important threading diagram. The diagram helps keep confusion away and lets you see what you need to do without any hassles.

The first step is to raise the presser foot and lift the take-up point to its highest levels. Next, place the spool of thread on the spool pin and pull a little thread out. After that is done, take the thread under both hooks in the thread guide then go to the tension plate and go under its hook.

Once you have got that correct go back up and pull the thread through the auxiliary spring and find the notch A. Now you go up from there to the hook on the guard and then over to the take up slot.

Go back to the front when doing this part of the threading. When you are done there go down and thread the hook on the needle clamp, and again back to front before going through the eye of the needle. Go left to right and you are done.

The Domestic company made some great sewing machines with some good innovative upgrades. It is too bad most of the machines and information are lost to history and too many mergers and competitive companies.