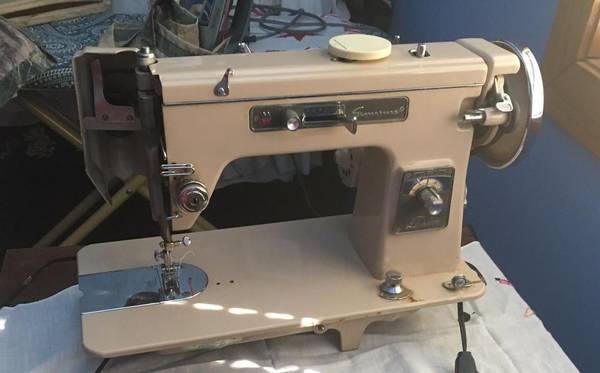 How Old is My Montgomery Ward Sewing Machine? (Models Review)

Your Montgomery Ward Sewing Machine may not be a Montgomery Ward machine. That is because it was always made by another company and Montgomery Ward just slapped their names on it. To keep costs down, they just bought their machines from a manufacturer no matter where they were located

How old is my Montgomery Ward sewing machine? The answer to that question will depend on what the serial number under the machine helps turn up. For model # UGH-1335A you are looking at probably a 65-year-old machine that may still work like a charm.

To get the rest of the information on Montgomery Ward (MH) sewing machines, just continue to read our article. It is hard to get updates on machines that were badged by different retailers as they were made by different manufacturers. 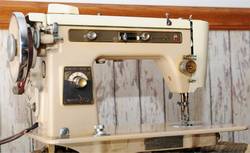 One of the possible manufacturers was the Nation Sewing Machine Company that was once based in Belvedere, Ill. We say once because due to competition that came from Japan in the late 1950s and early 60s, this company went out of business in 1957.

That means that MW had machines built by different companies after that year. It is no surprise to learn that MW and other department stores simply created a list of specs they wanted to see in their machines and sold the manufacturing contract to a variety of different sewing machine makers.

After 1957 MW probably found that working with Japanese companies to be more economical and they went with at least one company named Happy. This move allowed the department store to be more competitive while keeping the cost to their customers down.

There were about 15 different Japanese sewing machine manufacturers supplying different American department stores with sewing machines. It is possible that MW used almost all 15 but since no records were ever kept, it is hard to trace who sold what to whom including Montgomery wards.

The one big difference is that the ones the Japanese produced were often better than the singer model they copied from. 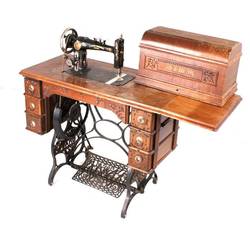 One of the first sewing machines marketed by MH was the old Foley and Williams sewing machine that began producing them in the 19th century. This was not a pre-MH machine as that company was formed in 1872.

The machine called the Oakland was sold for a whopping $8.75 in 1913. Trouble at the company had it restructured and renamed as the Goodrich Sewing Machine company. MH did not stock this machine in its stores but had them delivered when an order was made.

At the same time, the National Sewing Machine Company sent better sewing machines to MH starting in 1889 and continued up till it went out of business in the late 50s. In the early 20th century these machines sold for about $15 to $30 depending on the model you wanted to buy.

At this time MW went to the Japanese manufacturers who were able to produce thousands of different models and brand names at very reduced prices. It is difficult to trace exactly where the company got its machines as the Japanese did not preserve a lot of their records for their sales.

The store finally closed in 2001 and all its assets were sold off. 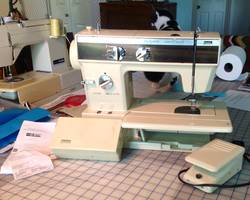 Since MW has gone out of business 19 years ago, it is quite difficult to find a lot of information about their machines online. There are bits and pieces for different machines but complete data is scarce.

You may be able to find the manual for the MH 1980 at this link or this one. The MW 1980 looks to be a fine machine and it is compact with a simple design that would help make sewing a lot easier especially for inexperienced sewers.

The one drawback is that the company used to send out different free sheets on different topics like threading the bobbin and so on. Unfortunately, these sheets of instructions were often long and confusing. It takes two hands to thread the bobbin on this machine.

If you are interested, you can read the instructions at this link as they are just a little too long to repeat here without making them more confusing. Made from plastic, the sewing machine looks durable and has all the key parts in a small area for ease of use.

There is a stitch length dial on the rear front next to the reverse lever. This was a very versatile machine that gave you important features when it was made. 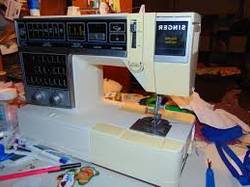 If you can find one you may have a very good machine on your hands. They were well built and 1984 may have been a part of MW’s signature line. That meant that the machine was of higher quality than some of the other ones MW sold in the 1960s to the 1980s.

This particular model may have been made by a Japanese company called Happy. But it may have also been manufactured in Taiwan when that country was one of the cheaper places to get items made.

Happy was and may still be a large manufacturing plant in Japan and started its business relationship with MW in 1955. The 1984model is a good example of Japanese simplicity coupled with North American need for convenience.

Every dial, lever, and switch are in very good locations and the machine was easy to handle while sewing. Because of the Japanese connection and the fact that MW went out of business almost 20 years ago, the 1984 may not have a lot of spare parts available.

The model UHT J277 is still available through different collectors and sewing enthusiasts, you are taking your chances on what kind of shape it is in. The one we saw came in an avocado color that may not be very appealing but it is in great shape.

The Ward’s Signature series was supposed to be the high-end model of the MW sewing machine line. They were put together with better parts and components making them last a long time.

You should be able to get one of the owner’s, instruction or service manuals today. Just click here to go to the website that carries a multitude of sewing machine manuals and click on the MW buttons.

To see the diagrams for the model 276 signature series just click on this link. If you are looking for usable spare parts it may be best to go to eBay and do a search there. It seems that there are many older parts for sale on that outlet’s website.

Of course, like most sewing machines, it was hit and miss as to the quality of the machine. The signature series may have been produced by the Japanese company only after 1955. 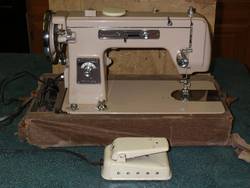 If you are thinking of investing in old signature sewing machines as a money-making opportunity, you can forget about that idea. These old machines do not and did not hold their value.

Since they were clones of other machines made by a Japanese company, these sewing machines were never really seen as a must-have sewing machine. eBay has one for about $126 but it runs and comes with lots of accessories.

Other machines placed on that outlet have a price tag of about $40. That price puts it right in the middle of the going value for Signature sewing machines. If you want a working one, you would be looking at paying between $25 and $50.

It is going to have to be an exception machine to be priced higher than that figure.

Where to Find an MW Sewing Machine? 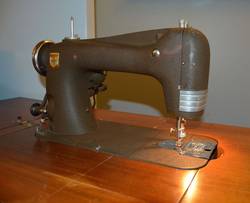 Since the company has been out of business since 2001 it is going to be a little difficult to find these machines. The fact that they are a Japanese knock off and possibly a clone of a Singer model, the value of these machines is not held in high regard.

Their longevity is in doubt as well, even though there have been times when the MW sewing machine has lasted for 40 50 years. Not all were so lucky. One place to look for an MW sewing machine would be eBay. There are parts and machines listed there right now.

Your best bet would be yard sales, estate sales, and second-hand stores as there are far better quality machines out there than the MW brand.

The age of the Montgomery Ward sewing machine is going to start about age 20 and grow older from there. Since the company went out of business at the turn of the century you will not find any younger models.

Like all sewing machine brands, you can find some older ones that won’t quit working but those may be few and far in between.