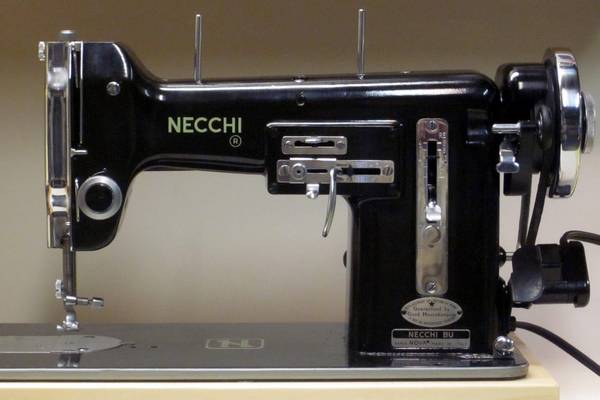 How Old Is My Necchi Sewing Machine? (Vintage Necchi Review)

Usually old age means things do not work as well as they used to. As your grandparents about that. But with certain machines, age actually can mean extra value. It also means an easier way of doing things.

To learn more about finding the age of your Necchi sewing machine, just continue to read our article. It is filled with information about these great Italian sewing machines. Getting the age right means you should be able to get the value correct as well.

How Old is My Necchi Sewing Machine?

One of the first things you need to know about a Necchi sewing machine is that none of them were made before 1924. That is because the Necchi family business was in making metal parts for other businesses and not their own.

It wasn’t till after the First World War that Vittorio Necchi’s wife asked for a sewing machine that he got the idea to make his own. It took 5 years but he finally started his own sewing machine brand.

The first Necchi that rolled off the assembly line was the Necchi BD and the final two letters give you a clue as to what decade your machine may have been made in. Sometimes Necchi used the same sewing machine name but just changed the last two letters.

The curvy Necchi models were made from the 1950s to the 70s so that will narrow down your search somewhat. But as we said earlier, the best thing to do is get your serial and model numbers and contact Necchi directly. 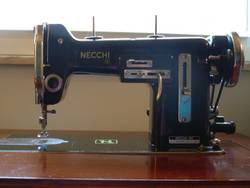 It is possible that Necchi still makes certain models, usually the upper end computerized sewing machines, but nothing has been found to confirm that rumor. Some top sewing machine companies contract their production work to save money.

It is a smart business move and cuts manufacturing costs as well as other expenses. That is probably why they have a deal with Janome and Fappy Co. These two businesses already produce sewing machines so to make more for Necchi is also a good business move on their part.

Those two businesses have companies in both Thailand and Taiwan that not only make their own machines but also the ones for the Necchi brand. Labor and other costs are lower in those two countries so the biggest expense is cut down as well.

Exactly when this partnership started is not known but it seems to have produced some top quality sewing machines that helps keep the Necchi reputation intact.

It is possible that their Italian factories may still produce some models but nothing for sure is known about that aspect of their business. For awhile, Necchi used Japanese manufacturing firms but the quality of their sewing machines went downhill, so they relocated their partnership to Janome and Fappy and moved production to Southeast Asia.

The Lydia model was the initial sewing machine that started using plastic parts. These wore out often but the downside of replacing plastic cams and gears was their cost. One plastic cam part costs over $100 to replace.

While the machine itself may not be too expensive, the cost of the parts makes it an unrealistic investment. 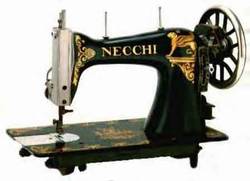 The BD started it all but it wasn’t long before the BDU, BU, BU Nova, BU Mira, and the Supernova BU came out and were produced before 1950 save for the Supernova which premiered in 1954.

The BU model was introduced in 1932 and the Mirella series came out in 1956. This machine won several awards for its craftsmanship and design. 1970 saw the addition of the foot pedal on the Necchi sewing machines so if yours has one of those it was not made before that decade.

The 1980s saw the production of the Logica series, the first model with an electric control panel. In the 1990s the company came up with the Vigorelli and Millepunti models. Each decade seems to introduce new technology and upgrades to the Necchi sewing machine.

But most people prefer to sue the older vintage sewing machines as they are easier to use and repair when something goes wrong. Last year, the 100 year birthday for the company, saw the introduction of a new series of sewing machines that should help make your sewing life more fun and easier to do.

Where are Necchi Sewing Machines Made?

Unfortunately, most modern-day brands outsource their production lines to cut their business costs. Western wages and other benefits are too costly for most brands to bear so they look for countries that have lower wage and benefit requirements to handle their production.

Necchi is no different in this business model and they have partnered with Janome and Fappy to produce their brand of sewing machines. The Japanese companies Neechi worked with lowered the quality too much so as soon as they could Necchi moved production to Southeast Asia.

Thailand and Taiwan are the two countries that handle Necchi production. Thailand seems to be the go-to country as even Bernina makes its Bernette sewing machines in that country.

That means that most sewing machines available are made in the same part of the world and have lost their individuality. One sewing machine, on the lower end of the scale, may be as good as another no matter the brand. 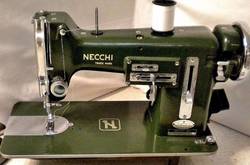 The Supernova was made in the 1950s and even then the company was ahead of its time. It had decorative stitch capabilities that did not appear on its competitors’ sewing machines for about another ten years.

One look at eBay and you will find a lot of 1950s Necchi sewing machine models from the 1950s labeled as vintage. If your model ends with the following letters, BDU, BU, BU, and BF then you stand a good chance of owning a vintage Necchi machine.

The 1925 model is supposed to be copied from the Singer 15 sewing machine but that ha snot been confirmed either. It took 6 years for the company to go from making 2,000 sewing machines a year to almost 20,000.

Then another 17 years to up that production to 1,000 sewing machines a day. In 1932, the BU model had the zig-zag feature installed in it making it a very attractive machine to buy.

How Good Are Necchi Sewing Machines?

But ask someone who got an original vintage Necchi sewing machine that works well and does not need frequent repairs then you may get an entirely different answer. In fact, the early Necchi’s have been called mechanical masterpieces and one of the best sewing machines ever produced.

The same cannot be said for the plastic ones produced in this modern age. The 1950 era Supernovas were said to be flawlessly designed and made so little noise a cat would not wake up when it is turned on.

The one drawback to this mechanical flawless aspect was that Necchi sewing machines needed a lot of lubrication to continue to work well. The same cannot be said about the modern Necchi sewing machines and you are going to have to take what you can get unless a vintage machine comes up for sale in your area. 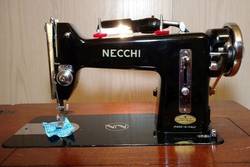 Age doesn't always mean inferior, slow to move, or time to be put out to pasture. Fine wine gets better as it ages as do many mechanical inventions from the 19th and early 20th centuries.

There is a reason for that statement. Many of the men who produced the early sewing machines took pride in what they sold to the public and strived to create great machines. Those machines were a reflection on them so they sought the best part,s the best materials, and the best craftsmen to put those machines together.

Not all vintage machines are this way but Necchi’s seem to enjoy that great reputation and their machines were finely-tuned devices that made sewing a joy. A simple test drive was all that was needed to see the Necchi difference especially the Supernova.

If you can get your hands on a Necchi vintage sewing machine then you are in for a treat. These machines are supposed to be some of the best mechanical devices you can sew with.

What is a Necchi Sewing Machine Worth? 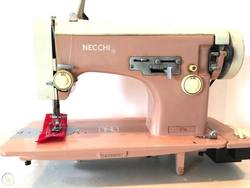 Despite their fine reputation, you may not get a lot of value out of your old Necchi sewing machine. A lot will have to do with if your sewing machine actually works or not, the condition the machine and case or cabinet, and other factors.

One look at eBay and you will see that the value of a Necchi machine ranges from a low of about $60 to a high of $300. Not much for a great machine that comes with a fine reputation.

But that is eBay and only a place to start. Other people have said that a good Necchi sewing machine could be worth as much as $400, not a lot of difference but enough to try and make a sale.

Another factor in your value would be where you live. If you live in a big city you may get that $400 price tag. If you live in a small town or rural area, don’t expect to get that much. The demand may not be there for the vintage Necchi sewing machine so the value will go down as well.

From what we have been able to uncover, the Supernova of the 1950s may be the best vintage sewing machine produced by Necchi. That model was ahead of its time and had features that were absent on other brands’ sewing machines for almost a decade.

This model was put together with precision and it worked like it was. Its balance wheel is said to move smoothly like silk but sadly there were a few problems with the machine that kept it from being perfect.

Its needle bar swivel was very sensitive and if it did not get enough oil it could freeze on you very quickly. This flaw kept this model from being the all-time classic it could have been. Other brands had needle swivels that could go months or longer without needing oiling.

Age has little to do with capability or ability. At least as far as sewing machines are concerned. The old vintage Necchi’s just needed a little oiling and the odd repair and they can keep on sewing for decades.

The trouble was it needed frequent oiling which interrupted sewing time and made the machine a pain to use on along term basis. But when they worked they had master precision which made sewing fun. Old age is nothing to sneer at when it comes to sewing machines.