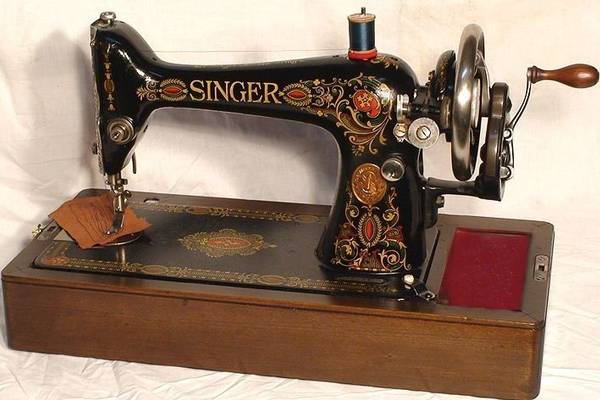 How to Date a Featherweight Sewing Machine (History, Cost)

Knowing how old your sewing machine is goes a long way in determining its value. Once you get the value then you can decide if you want to hang onto your machine or sell it to make a few extra dollars.

To learn more about dating the Singer Featherweight sewing machine, just continue to read our article. It has the data you need to get an accurate age and possible value. The featherweight was made between 1933 and 1961 with some extended up to 1968 or 69.

What Are Featherweight Sewing Machines?

The original Featherweight sewing machine was a lock stitch model that seemed to gain a lot of popularity very quickly. Even today they are highly valued and sought after by collectors of fine sewing machines.

The company started with the 221 and was experimenting with its final design even while production was going on. That will explain why your 221 model is a bit different from your friends’ or relatives’ models.

These machines are supposed to be easy to operate and work with. They brought a lot of ease and comfort to many people’s sewing experience. They seem to be easy to use and can be threaded without too much trouble.

Parts shouldn’t be too hard to get as they are a sewing machine that many people still use today when they can get their hands on one. 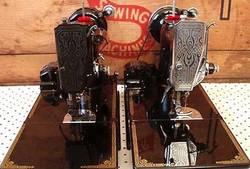 It was Oct. 3, 1933, when the company commissioned its new Featherweight sewing machine model. It was called the 221 and 10,000 were ordered for the first run. Because the company hadn’t decided finally on the design there were minor differences found between these initial 10,000 sewing machines.

Then the sewing machine made its debut at the 1934 Chicago World’s Fair and the badge depicts that debut with the Chicago name and date. Just look at the badge to get a date on those initial sewing machines.

Throughout the 1930s, the machine went through a lot of minor changes, and to see those you can click on this link. There are just too many to mention here. One keynote is that during the war years of 1942 to 1944 no Featherweight sewing machines were made. This was due to the Limitation Order L-98,

In 1953 Singer made the 222 but that machine was not marketed in America but in other western countries only. This model continued to be produced until 1961. The 221 went on to be made until 1969 although the exact number produced is not known.

How to Identify a Featherweight Sewing Machine 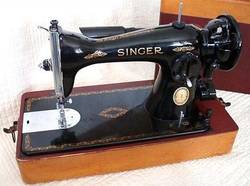 This may be a lot simpler than it sounds. Because the machine became so popular and Singer liked it so much, they made sure it could be identified very easily. Prior to 1953, the 221 was the only model of the featherweight made.

You can see the date of manufacture if the sewing machine is carrying one of the several different badges Singer placed on their machines. The date is quite clear as the badge honors different celebrations including its own centennial celebration.

In 1941 and 45 Singer placed blackened parts on their 221 machines as there was a ban on using chromium at the time. If your machine has an MR on it, that unit was destined for Latin American countries but some remained in America and were on the 1947 221 model approx.

Just before the company started to make the 222 model, they placed a 221 badge under the regular badge to separate it from the new model about to be released. A K was added to the 221 badge when the machines were made in the UK from 1959 to 61.

How Much Does a Featherweight Sewing Machine Weigh?

You would think that an all-metal sewing machine would weigh a ton. Most of them do but not the Singer Featherweight. That means there is a deeper meaning to the name than you may have thought.

Singer was experimenting with aluminum when it made the featherweight machine. The total weight came to about 11 pounds. Yes, you read that right. 11 pounds making it an easy sewing machine to relocate when it became necessary to do so.

This lightweight extended to the 222k which was supposed to be made for the European market. 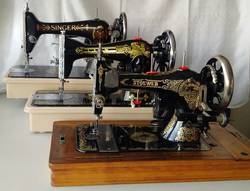 Despite is lightweight, the featherweight sewing machine listed in approx. At 18 by 14 by 12 inches overall. That may not be the correct size for all the different 221 and 222 models made by Singer.

Because the company made countless changes over the years on production it stands to reason that the machine changed sizes during those decades. Some people compare the Featherweight to the classic 1957 Chevy.

Size did not matter when the machine was considered a masterpiece in engineering. That was what the featherweight was, a masterpiece showing that sewing machines can be beautiful pieces of machinery that will last a long time.

Most likely, the Singer company had a division that handled the painting chores when they produced their Featherweight sewing machines. They could have contracted the job out but painting 10,000 or more every year would be a giant task for any painting contractor that had a shop outside of the Singer manufacturing plants.

But if you want to upgrade the look on your classic Featherweight machine, you can go to just about any painting company that handles repainting old machines. There is a lot of work involved with repainting and not just everyone wants to do that kind of detailed work.

Your best bet would be to check with some sewing machine repair shops and see who they recommend. You could do a local internet search to find a company near you but as we have said, the sky is the limit on who can paint your sewing machine.

It may be a task for your in-home DIY expert

How Much do Featherweight Sewing Machines Cost? 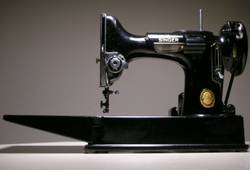 The original price tag for the years between 1933 and 1950ish is between $125 and $200. Someone took the trouble to adjust for inflation and that price tag reaches about $2000 in today’s money.

The current value will range and is very subjective. It will depend on who the owner is, and emotional ties can bring the price up quite high. One person is selling their model on eBay for around $500.

Others are being sold on that website for between $170 and $600 so it will depend on the accessories you get, the condition it is in as well as other factors. There was one model selling for only $77 so don’t get your hopes up just yet.

To get top dollar the machine should work and be in the best condition possible.

How Old is My Featherweight Sewing Machine?

We cannot reproduce the exact chart here but there are 3 you can use to date your featherweight. They are all found on this website. But we can say that if your featherweight is not listed there are 3 reasons for why that takes place. Those reasons are also listed on that website and just above the chart.

Dating your Singer Featherweight is not going to be hard because Singer kept excellent records and the machines were made at the right time in history. 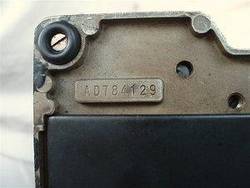 The serial numbers for both the 221 and 222 are found on the bottom of the machine. Sometimes they were placed inside the bottom tray or underneath it. Generally, they will be found next to the bottom tray.

The problem you are going to run into when you start checking serial numbers is that they did not go in order from year to year. This problem was done in all 3 locations.

Needles for your featherweight sewing machine should not be that hard to find. All you need to fit both the 221 and the 222 is the Schmetz universal 80/12. That is the easy part as the 221 and 222 do not accept the needle in the traditional manner.

When facing your machine the flat part of the needle needs to face left. It won’t work that well if you place the flat side facing right. You may end up breaking the needle or having the machine stitch badly.

The difference in the two positions is minute but large enough to make a world of difference. Like any masterpiece, it doesn't take much to ruin the performance of the machine when you make minute errors like slipping the needle in wrong.

Where to Buy Featherweight Sewing Machines 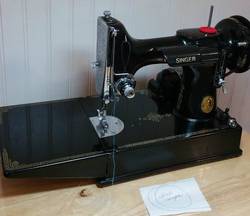 Here is the good news. There are many places that you can buy a Singer featherweight sewing machine. The bad news is that you may have a tough time deciding where you want to make your purchase.

These are very popular machines that hold their value so expect to pay a nice fee when you want to make a purchase. eBay is one location you can go to and they seem to have quite a few listed on their website.

Then you can go to Craigslist or some other internet classified website to find more models for sale. An internet search will turn up several companies that deal with Featherweight sewing machines and some of them have a lot of information on these sewing machines. One example is this website.

Antique shops, sewing machine repair shops, and other similar places, including auction houses, should have some or a line on where you can get one model for yourself.

The first option you have is also a free option. They have PDF downloads available and several manuals that fit different 221 and 222 sewing machines. Just click h﻿ere to get to those selections.

Then you can try this location if the first one does not have the one you want. If you do not want to buy a manual, there is one you can read online at this link. Whether it matches your unit or not is another question.

eBay may have some for sale. Just put Singer Featherweight manuals in the search box and see which ones come up.

Owning a masterpiece in engineering helps build your self-confidence and give you a rise in status in the sewing machine world. Owning the Featherweight sewing machine may well be the best feather in your cap you can get.

Both the 221 and 222 are superb machines that should work well even after 80 years of previous service. Go with the best to get the best results and satisfaction from your work.