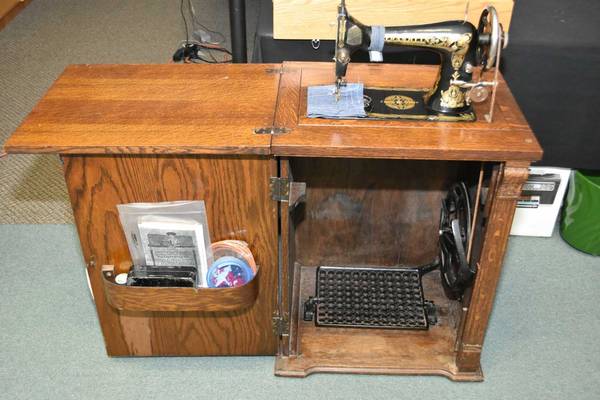 How to Date a Franklin Sewing Machine (Value, Models)

No, it was not started by one of the founding fathers of the American nation. But having the same family name may have helped it get a foothold in sewing machine industry history. But like many other sewing machine companies, there were just better competitors that put them out of business.

To learn more about the Franklin Sewing Machine Company just continue to read our article. It searches history for you so you get the right details. The problem with this company is that there are too many players in the game to get an accurate picture of what went on in this company. 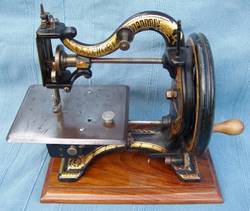 The English version of the Franklin Sewing Machine Company began after the demise of the Cole, Maxfield & Co., sewing machine company went under. It was started by Arthur Maxfield, Isaac Cole, and Charles Fowkes in 1868.

The partnership lasted for about 4 years with Cole and Maxfield leaving to start their own firms once again. It was Charles Fowkes who kept the company going for at least another year when it was bought by Joseph Harris in December of 1873.

The name changed to Imperial Works but the sewing machine model remained the same. From the mid-1860s to this time there was only one model made by the Franklin Sewing Machine Company- the Agenoria.

Agenoria was called the goddess of industry and silence and is often depicted with a prone lion by her side. In 1878 Royal Sewing Machine Company bought Imperial Works and the Agenoria sewing machine from Harris and continued the production.

The Royal Sewing Machine company lasted till about 1888 before it was bought out or went bankrupt. History is a little muddled about these early sewing machine companies as they changed hands frequently with the same players moving to the new company or starting their own.

One thing that is known is that the Agenoria was made by several companies throughout its own individual history.

Who Made Franklin Sewing Machines?

In the English Version, it was the Franklin Sewing machine company that started making franklin sewing machines but even that is a bit iffy as the sewing machine produced by this company was designed and first built prior to the company’s existence.

It was designed in the 1860s and began to be marketed by about 1870 if historical records are accurate. The original maker of the sewing machine was one Arthur Maxfield but there were so many men involved with that original sewing machine that different companies produced it under different names.

Domestic sold its Franklins directly to Sears & Roebuck. Then in 1926, White bought out Domestic and continued the production of the Franklin sewing machine made popular by Domestic. White even began making a Franklin rotary machine for a while. 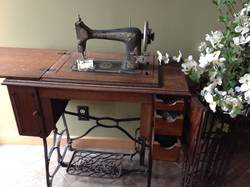 There is little that can be said about the original Franklin sewing machine company. Its existence was just a blip on the scale of history and not much has been recorded about it.

What is known is that it started in 1868 by Arthur Maxfield, Isaac Cole, and Charles Fowkes. The company lasted till about 1872 or 1873 but even those dates cannot be fixed accurately as the players changed constantly.

Imperial took over Franklin around the end of 1873 putting a permanent end to the Franklin Sewing Machine Company but the sewing machine lived on through many other business owners.

Arthur Maxfield continued to make the Agenoria sewing machine through his company the A. Maxfield & Co. But it seems he sold out to Royal somewhere around 1877. Also, his former partner Mr. Cole left the partnership to sell sewing machines and it seems Mr. Maxfield badged some of his Agenoria machines with the name Cole & Co.

How To Date a Franklin Sewing Machine

The first way to date the Franklin sewing machine is to look at the name on the machine. If it has the name Agenoria then it was a machine that was built prior to 1890 and after 1868 or 70.

There is a serial number stamped on the bottom of that machine but with no real records to look through to find corresponding information getting an exact date is impossible.

If the company name on the sewing machine is Imperial then that machine was made between 1873 and 1878. If the name is Royal Sewing Machine Company then it was made in the 1880s.

The American version began in 1911 and should have the Domestic name attached to it. Domestic made the Franklin sewing machine until it was bought out by White in 1926. White’s production of the Franklin lasted until the 2nd World War.

All of these companies and most likely their records have disappeared from history so the serial numbers are worthless until such records can be found again. 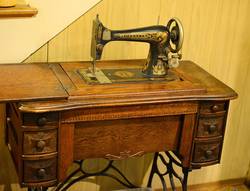 The location of the original serial numbers was at the bottom of the sewing machine. One just had to turn it over and they would see the stamped number underneath the Mayfield trademark. There was a patent date nearby as well.

The serial number for the Harris version of the Franklin sewing machine was placed underneath the hourglass and inside the trademark seal the company used at that time.

There doesn't seem to be any mention where the other companies that made this sewing machine placed their serial numbers. Again the loss of records has something to do with the lack of information.

It is not sure where the Domestic or White Sewing machine Companies placed their serial numbers but logic suggests that they too were out of sight and underneath the machines.

Since both White and Domestic sold all their machines to Sears, there is a possibility that those records may still be in existence.

For the original sewing machine, the only model number or name that is mentioned is the Agenoria. Despite having only one maker, those companies all used the same name when they produced their version of the Franklin sewing machine.

The more recent Franklin sewing machine seemed to have one model number with several variations. There was the 117.91, the 117.911, then 117.1131 and on it goes. How many different models of the more recent units that were made is unknown.

The 1911 Franklin sewing machine may have been a copy of the Singer 27/127 model. To find the model number look on the different badges and trademark spots to see if the companies placed them in those locations.

There is little information explaining where the model numbers were placed. The Franklin deluxe was a model that had a spotty existence appearing first in 1933 and then disappearing until 1938 where it was renamed the Kenmore deluxe. 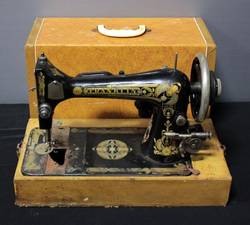 If you are looking for a true antique Franklin sewing machine you may be out of luck. It is unknown how many were made though a 12,000 figure has been mentioned in some histories of this sewing machine company.

eBay does not have any Ageoria sewing machines listed at its website and your best bet would be to go to England to see if any still exist in the antique shops in that country. As far as can be determined none of those original machines were ever exported to other countries.

For the more modern Franklin sewing machines, you can go on eBay where a few are on sale at vastly different prices. Depending on the model, condition, and if a cabinet is included you can expect to pay between $80 and $400 for one of the American made versions.

Then you will find that sewing machine repair shops, especially those that deal in vintage and antique machines, as well as regular antique shops, will have another idea of what the value of those machines are.

Don’t be surprised if only the American Franklin sewing machines are found in North America. Then you would only be getting a machine badged for Sears & Roebuck department stores.

There is one selling at eBay right now and its price is a huge $25. You can try searching that site for more if you want but again you may be surprised at the price of those old manuals.

Then the Franklin Rotary manual can be found at this site. There is no word on the cost but you can read it without buying it. The navigation is quite simple to use. Or if you have a model 117.42 Franklin sewing machine, click on this ﻿l﻿ink to take you to the manual. It is also readable online as it is a 26 page PDF file.

If you are desperate try this link. It goes to old White manuals and you may be able to find the Franklin model that the company produced and get the manual for $19 approx.

Good luck with finding the original manual for the original Franklin sewing machine. A trip to England may be in the works if you want one bad enough. 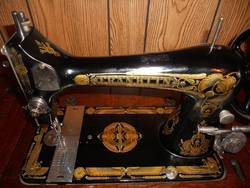 One had the image of the goddess Agenoria who was sitting with a lion and doing her work. Some of the machines were made with silver plating. They became popular after the original was given to Princess Alexandra the then Princess of Wales.

How To Thread a Franklin Sewing Machine

Without an original Franklin manual, it would be almost impossible to describe how to thread those early machines. You would be lucky to find any in existence since they are over 140 years old.

The following instruction is for the old Franklin Rotary sewing machine made for Sears & Roebuck. First, you need to move the handwheel so that the take-up lever is in its highest position. Second, you need to put a spool of thread on its pin and pull the thread out.

It is a tangled history but there were some great sewing machines made in the 19th century that just did not get the breaks. The Agenoria was one of those sewing machines even though it had royal approval. Bad management may have been the reason for that failure.