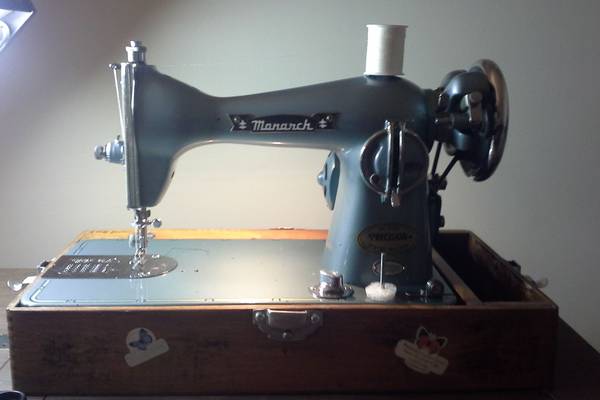 History can be cruel. Even with famous name brands, history can hide the existence or make it difficult to find any information on different brands of sewing machines. Monarch is one of those unfortunate sewing machines. While well known, little is known about the company behind it.

It is possible that your grandmother or mother had one of these machines in their homes. The Monarch brand was one of those famous Japanese sewing machines that have little to no history to review.

Who Made the Monarch Sewing Machine? 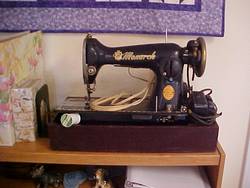 The most specific piece of information that can be said here is that the Monarch sewing machine was made in Japan by one of the anonymous Japanese companies that profited from the Marshall Plan.

That plan was established to help Japan rebuild itself and many unknown Japanese firms took advantage of it including the one that made the Monarch sewing machine. The original brand was produced between the late 1940s and the late 1960s and disappeared from production after that era.

The machines were made from cast iron and other metals and were famous for their smooth operation as well as its unique styling. It is possible that the machine was designed to last forever but if it has plastic parts that concept would have been the ideal and not the norm.

The brand, however, did not die completely and that topic will be addressed in the next section.

The Marshall Plan was designed to rebuild World War 2 American enemy, Japan. Whether it was done out of guilt for dropping two atomic bombs on the nation or because America always had a reputation for rebuilding the nations it fought on wars is unknown. What is known is that the Monarch sewing machine came from that effort.

The sewing machine was made in japan by an anonymous company whose identity is long lost to history. Very little turns up on the Monarch history because many Japanese companies did not keep records and those that did in the early post-war era may not have survived and their records are lost.

Do not be confused with other companies named Monarch. It is a generic title referring to a King or a queen and it is often used by many business owners trying to establish a solid reputation.

You can read about it in this 2013 news release by the owners of that new Monarch brand. It seems by the images, they have 3 models for you to buy. 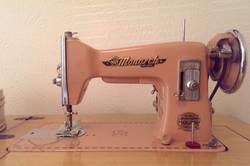 Value is subjective and the old saying ‘one man’s trash is another man’s treasure’ applies to all things made throughout history including sewing machines. A sewing machine one person considers worthless and inoperable another may recognize as valuable once fixed up and restored.

This seems to be the case for the Monarch sewing machine as some vintage models are going for over $400 while others barely make it past the $100 level. One reason for the difference in value is that there is a rumor that many Monarch models were simply clones of the Singer 15.

**One special note. While we talked about the Monarch brand being made in Japan during the 1940s and 60s, there is supposed to be an early 1900s Monarch sewing machine on eBay.

In our research, nothing came up on any early Monarch sewing machine model or company. There was a name on the little voltage badge but nothing turned up in a search. You can see that machine at this link.

The older Monarch sewing machines seem to be real workhorses. One person liked them enough for free quilting and kept 2 on hand at all times. If the machine says Precision Deluxe on the base then it is one of the many Japanese clones of the Singer 15.

That is not necessarily bad as it has been said that those Japanese firms improved the Singer 15 in noise control and other operational flaws. That improvement and the many different colors help make the Monarch sewing machine popular in America.

Aside from that one news release nothing more has come up about its quality, longevity, and operation. They are basic machines that have 8, 23, and 26 stitch patterns to them.

The 8208B, K50A, and the 990HC all come with a 25-year warranty, and if the company still exists you may be able to take advantage of that protection. These new models are said to be marketed through brick and mortar stores only. 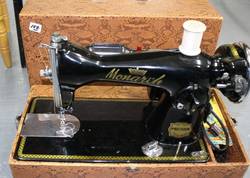 This does not seem to be as big a problem as finding out the history of the sewing machine and who made it. The first place you can check is eBay as they had some parts listed for about $50.

Then, this company has parts on sale but it is located in Britain, and prices are marked in British Pounds, so be ready to pay more once the currency exchange is done and shipping costs are added.

Since many of the Monarch sewing machines were cones of Singer models, it may be possible to use parts for that brand in your Monarch model. Check with your local sewing machine repair shop to make sure before you buy Singer parts.

This is one of the 3 models in the brand resurgence line up and it comes with 23 stitch patterns, with 11 of them a stretch stitch. Also included on this machine are an automatic threader and a 1 step buttonhole.

Other features include a push-button reverse, recess threading, and a smooth operating, yet quiet motor. With its 25-year parts warranty, you should be able to keep this model in good shape. As for looks, the color seems to be white only with some blue highlights.

Also, the other two models come with different colored highlights to help you tell the difference between them. The new Monarch sewing machine company uses the same factory that builds many sewing machines for the top brands. They claim to have superior quality and use the best parts available.

You can read about them at the link we supplied in the history section of this article. 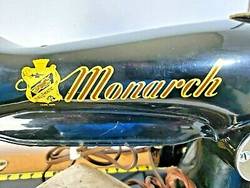 If the words Precision Deluxe appear anywhere on the machine, then it is a Japanese made model and produced after the second world war. It is a clone of the Singer 15 and the American market was flooded with these types of machines during the decades of the 40s to the 60s.

The one thing you have to be careful about is that there are many different sewing machine ‘brands’ that use the dial o matic name. One such alternative was Illinois which was also made in the 1950s.

It is possible that the same company made all the dial o matics and just slapped a different brand name to it to spark sales. The Monarch version is said to be great at free quilting and is a real workhorse.

If you can still find one they are great to have around.

This may also be one of the many Japanese models made during the rebuilding of the Japanese nation. Little is known about it and the 3 models produced by the new Monarch sewing machine company does not list it as their model.

Most likely it too was a clone of the more famous singer sewing machine line up and just given the precision name to avoid any marketing and legal hassles. Then if the word deluxe follows after it, it probably is similar to the dial o matic sewing machine.

It's not an early 1900s model that seems to have been lost to history and carries little value. Any details about this Precision model also seem to be lost or misplaced as no one is talking about it except to say it was made in Japan. 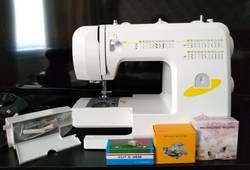 This sewing machine seems to be on the same footing as the Jaquar 099 Overlocker machine in quality and features. It comes with an automatic needle threader and drop-in bobbin as well as 34 stitch patterns.

This model sells for approx. 199 BP which makes it about $350 approx, give or take a few dollars. The machine also has a 1 step buttonhole function, snap-on presser feet, an extra high presser foot lifter, and many other features.

The only odd thing about this model is that any information about it comes from UK websites. The word from the few reviews on the machine is that it is easy to thread with its automatic threader and just as easy to use.

The color scheme on this model is white with yellow highlights and comes with the Monarch company brand name.

There is one location that seems to have one manual for Monarch sewing machines. It is for the Syncro-Matic Straight Stitch sewing machine model and can be purchased at this link.

This British company has one as well and it may be the same company as the one in the previous paragraph. The cost may be slightly cheaper though as it rings in at 4.95 BP.

If you want a free Monarch manual, you can check this link out. Their results are as sparse as the other two companies. Then if you need a manual for one of the newer Monarch sewing machines, you can try this toll-free number Monarch Sewing toll-free at 800-680-1146 from 10 am to 5 pm Eastern Time Monday through Friday or e-mail info@monarchsewingmachines.com.

That information comes from their news release we linked to earlier. Again, in all of our research, we have not found any more information on this new company or if it still exists.

How to Thread a Monarch Sewing Machine

Since we have been unsuccessful in obtaining a lot of good information about these sewing machines, it is difficult to find any threading instructions for the 1940s+ Monarch models. No one is talking about threading one.

Since they were clones of the Singer 15 it is possible to try and follow those instructions or go by trial and error. We apologize for the lack of instruction here but the newer Monarch models come with automatic threaders so you do not have to do the same amount of work you would have if you own an older vintage machine.

With that said, you can also try using the instructions found at this link as it claims most sewing machines in the 40s to 60s were threaded the same way.

The Monarch sewing machine contains many mysteries. It is not known who originally made the early 1900s model nor is it possible to identify the Japanese firm that produced them after the war.

Then the new Monarch sewing machine company only has one little web page on the internet and silence after that with one model talked about on British websites. They may be good machines but then mysteries remain.