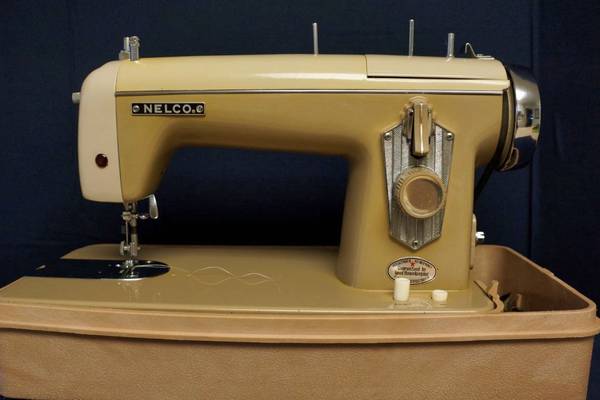 There once was a man named Al Jolson. He was born in Russia and was a very gifted entertainer who was labeled as the greatest entertainer to have ever lived at that time. All he shares with the founder of the Nelco sewing machine is the last name. Leon Jolson was born in Poland and landed in the sewing industry’s hall of fame.

Leon Jolson was also a gifted man. By the age of 25, he made a name for himself in Europe working for the Italian sewing machine company, Necchi. Selling sewing machines was not his only talent as he helped design some of Necchi’s all-purpose sewing machines.

To learn more about Leon Jolson and how he started the Nelco sewing machine company all you have to do is keep reading our article. It has the information on this gifted yet not always law-abiding man. He cut corners to make his mark on the sewing machine industry and land himself in the sewing hall of fame. 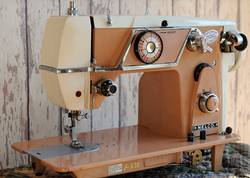 The man behind Nelco sewing machines was born in Warsaw Poland in 1912. During his youth, he decided to follow his father and work in the sewing machine industry and by 1937 he was already a reputable man.

Unfortunately, the war and the Nazis interrupted his career and he was sent to a concentration camp. But he was lucky to have mechanical skills that gave him enough freedom to escape and return to his wife and family. He and his wife were captured again but they jumped from a moving train and escaped again.

Once in New York, he set about learning how the sewing industry operated in America and positioned himself to be a vital cog in the industry. He was a parts man who spent his time finding parts and machines so the owners of garment factories could concentrate on making their clothing lines.

During this time he contacted Necchi and became a distributor for that company in New York. With the success of this venture, he also contacted Elna and did the same thing. Then he saw the influence of the Japanese manufactures and contracted with one of them to make his Nelco sewing machine.

This is where he got into trouble as he combined the names Necchi and Elna into Nelco and copied his design from the Necchi sewing machines he imported. At no time did he or his company manufacture Nelco sewing machines.

Who Made the Nelco Sewing Machine? 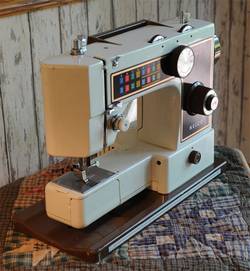 If you want to be technical about it, Mr. Jolson was the man making the Nelco sewing machines. It was his distribution company that commissioned the new sewing machine and contacted with an anonymous Japanese firm to do the actual construction.

As we said earlier, Mr. Jolson wasn't always a law-abiding businessman as he took the designs for his brand sewing machine from the Italian company and combined the two manufacturers' names into his brand- Nelco. Those two companies soon found out about what he had done and filed lawsuits against Mr. Jolson and his company.

The results of the many lawsuits made Mr. Jolson lose his licensing and dealerships with both Necchi and Elna but he was allowed to keep using the Nelco name to about 1984 approx. 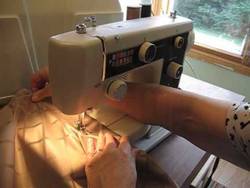 There was never a real manufacturing plant called the Nelco sewing machine company. There is actually no name of his distribution company recorded or left in the records. Itis hard to say what became of the company after Mr. Jolson retired. He worked with 2 other partners and anything could have changed over the years.

One of the interesting facts about this company is that at one point the Nelco sewing machine carried a badge stating it was guaranteed by the Western Distributors Inc of St. Louis. This was a company run by Nick Tacony and which turned into Babylock.

There is no mention in Babylock’s history of ever joining forces with Mr. Jolson and his distribution company. There is also no mention of any partnership with Mr. Jolsonor Nelco in the Tacony corporation history.

How the two came together is going to be a mystery that needs to be solved at a later date. Tacony started in business in 1946 and used importing as one of its key business strategies. The company imported sewing machines and parts from Europe and this may be the connection that put Nelco together with Western Distirbutorship Inc.

With the records for Mr. Jolson’s company lost it will be hard to say what the true story is between this odd double badging of a Nelco sewing machine.

When Were Nelco Sewing Machines Made? 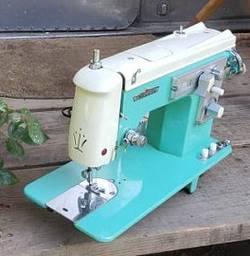 It is said that Mr.Jolson did not arrive in America until 1947. he spent his first few years in his new country selling and finding sewing machine parts as well as beginning a business distributing the Necchi sewing machine. Elna was added a little while later.

The actual date for the manufacturing of Nelco machines was about 1952 or 53 when Mr. Jolson realized that a cheaper sewing machine was needed. We do know that the Nelco was made in 1972 and that Elna filed a lawsuit in 1894 so the best guess is that the Nelco sewing machines were made between 1953 and 1990 approx.

The only problem is that Nelco does not exist and you may have to go through an antique dealer to get the exact age of your machine. Or you may need to contact a vintage sewing machine repair shop to see what information they have on the age of different Neclo sewing machines. 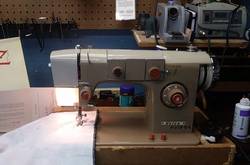 Over the years it was in operation the company run by Mr. Jolson produced quite a few different Nelco models. There were the Nelco ultra sewing machine 5102a and 5102f, the YM 7, the SZ-217 EDC, the Labelle Xonic 235, the Lyra R-1000, and its zig zag model to name just a few.

Then there was the Sierra and the model R-400 and the R-2000, along with the Nelco Prima Vera (a copy of Elna’s Primula model), and a copy of the Necchi model Supernova Julia. For a company that did not make its own sewing machines, they were able to produce a lot of different models over the years.

This is by no means a complete list of the models distributed and sold by Mr. Jolson’s company. He was able to sell these machines through both JC Penny and Walmart. Both department stores gave him access to a broad market both the upper middle class and lower class. 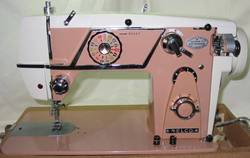 Going to our go-to value starting point, eBay, you will find that there is a wide range of prices for different Neclo sewing machines. The most expensive was selling for about $422 and that was the Ultra sewing machine 5102a and 5102f.

From there the value drops dramatically as you will find those sewing machines valued at around $100 to $150 and less. It is said that collectors are not too fond of the Nelco and do not consider it something worthy of having in their collections if the price is too high.

The value of your machine will depend on the usual factors of your geographical location, the condition of the machine as well as other considerations like if it is working or not, has its original accessories, and so on.

Unless the machine is really rare do not expect to get much for your vintage Nelco sewing machine. 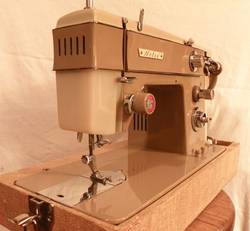 That would depend on if you got a lemon or not. One experienced sewer said that her Nelco has lasted for over 20 years. Another said that theirs has been sewing for 45 years. Then a third regrets getting rid of her 1972 Nelco sewing machine as it worked like a pfaff and was a lot cheaper to buy.

So yes, the Nelco sewing machine can be a very durable and good machine if you find the right one. We cannot speak for all the models Nelco put out but at least there are some that were made from all metal parts and lasted for a very long time.

Even though a lot of Nelco sewing machines were copies of both Necchi and Elna, they were made with metal parts and were built from solid manufacturing criteria. They may still be a great machine to use and many sewers still do use their vintage Nelco.

These machines may have been made through not so legal means but at least they were not cheaply done. They are worth the money you paid or will pay for them. Just make sure to get the right model.