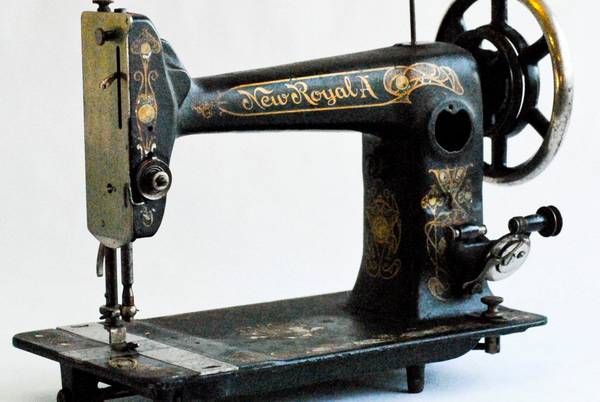 The trouble with history is that the names of old companies may be so similar that they are often lumped together even though those companies may not be the same. This is the issue with Old Royal and Royal. We found nothing for Old Royal even though it may have existed at one time.

It may be that the old royal sewing machine company was the one started by Thomas Shakespear and George Illston in 1868, and located in Small Heath, Birmingham. This company did not have a long shelf life and went out of business before 1890. It used a bust of William Shakespeare as its logo.

To learn more about the old Royal or Royal sewing machine company just continue to read our article. It provides information that can be found about these companies. If it exists and can easily be read.

Who Made Royal Sewing Machines? 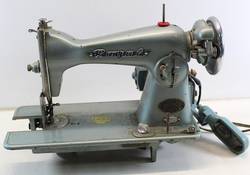 To start the Royal or Old Royal sewing machine company was a separate company and was not owned by any other business or corporation. It started in 1868 in England and only stayed in existence for about 20 years.

The owners were Thomas Shakespear, probably no relation, and George Illston who wanted to make their mark in the sewing machine industry. 9 years later they bought out the Imperial Sewing Machine company that was started by two men named John Judson and Joseph Harris in 1873.

That year, 1877, saw the Royal sewing machine company become a limited business. That meant that it was now known as the Royal Sewing Machine Ltd. Company. 5 years later the company changed again and changed its name to Royal Machine Manufacturing Co.

Unfortunately, the new names and the new classification of the company did not help it to survive. Just 6 short years after this last changed the Royal Sewing Machine Manufacturing Co., went out of business.

There is no word on if they were bought out, merged, or simply shut their operations down. The one claim to fame that made the company stand out was that they bought the rights to make The Agenoria sewing machine which was an introduction by another company before the Royal was established.

At this point, we have to make a distinction between the Old Royal sewing machine company in England and went out of business 12 years prior to the turn of the century from the one that was based in Rockford Illinois which was called Royal Sewing Machine Company after 1883. The name prior to that switch was St. Johns Sewing Machine Company and there does not seem t be any relation between the two businesses.

The Old Royal sewing machine company made quite a few different models that may or may not have been exported to American markets. Since the name would have conflicted with a going concern in the same industry in America.

The difference between the two would be in the use of the bust of the author Wm. Shakespeare by the English version, with the American version using a different logo and trademark.

Royal Sewing Machine Made in Japan 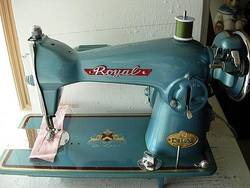 Here seem to be some Royal sewing machines made n Japan but it is highly doubtful that those machines were made in association with the Old Royal Sewing Machine Company. The English version went out of business long before there were strong industrial and manufacturing ties between western and Asian countries.

The online auction house did have one made in Japan on sale but it looks like it has been sold. The machine came in its own wooden cabinet and was made in occupied Japan in the 50s or possibly late 40s.

That last owner may have continued selling sewing machines with the Royal model name but there should be no link to the English company of the same name.

The models made by the English company were named the following-- The Royal Milton, The Avon, The Times, The Monarch, The Regent, The Shakespear, The Challenge, The Agenoria, The Windsor, The Eureka, The Eugenie, The Royal, The South Kensington, and the J W Sleath.

It seems that any of those models that survive today can fetch a nice sum of money at the right sale. There is no word on how many were made or on how many still exist today. The rarer they are the more valuable they have become.

The American company put out about 3 models with the name New Royal as their model names, the Model A, Model K, and the Model SB were just the additions to the New Royal title. There may be other models produced by that American firm as the name was in use for about 12 years before being changed again to the Illinois Sewing Machine Company. 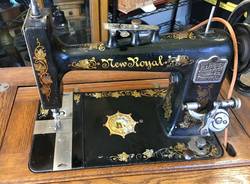 While these serial numbers do exist, finding the right list can be difficult as with both Royal companies out of business prior to 1900 those lists easily disappear. We have found three serial numbers for the above mentioned New Royal models but they are only one number per machine.

The older companies taken over by other businesses and the English Royal company do not seem to have large listings for serial numbers. There are a few for the old Royal sewing machines made prior to 1888 and this may be due to the fact that many of those machines did not survive the stresses of time.

No list can be compiled because the numbers themselves are lost.

Tracking down a pre-1900 Royal sewing machine manual may be relegated to looking in antique shops in both America and England. There does not seem to be any listed or on sale anywhere that we could find on the internet.

Our usual go-to manual sources have some but they are for the more recent Royal sewing machines and not for the ones made before the turn of the 20th century. For some manuals click here and for more click on this link.

Feel free to contact those companies and ask for leads. Even eBay doe snot have any listed for sale that we saw. You can try vintage sewing machine shops that sell or repair older machines to see if they have come across any. Plus, you may have luck going to auctions and seeing what they are selling.

How Much is a Royal Sewing Machine? 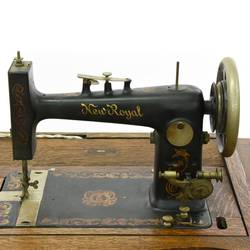 When first made the Agenoria sold for about 4 BP and 4 pence and when the silver version came out the price went up to 6 BP and 6 pence. These prices were the equivalent of 2 months' wages at the time.

Their price nowadays is going to depend a lot on the mood of the seller and buyer as there is no set price for any model whether new or old Royals. The price you will get for yours will depend on how rare it is and what condition it is in.

One unknown model sold for 555 BP and another sold for 1000 BP. These machines were made from cast iron and were very heavy. They were also in tip-top shape. Do not expect to get much for any more recent Royals that were made in Japan.

A new Royal machine with cabinet was selling for less than $100 on eBay. Two Old Royal Shakespear machines were selling for over $500 on eBay to give you an idea of the difference in value.

There are some of these still around as they were made from solid wood. The one mentioned above looked in good shape, had little wear and tear, and still held its sewing machine securely.

Then the one on sale at this company also looks like it is in top shape and can handle another 100 years of service. There are other locations on the internet where you can find these cabinets reasonably priced. One is marked at $175 and is well over 100 years old.

The thing is if you want one of those cabinets you have to do a diligent search as there is no one store selling multiple cabinets. They are usually individual cabinets because they may not have survived the test of time either.

Just be patient and you may find one that you can restore and resell at a profit. Good sewing machine cabinets are hard to find these days. Modern standards are not like they were in the 19th century.

How to Thread a Royal Sewing Machine 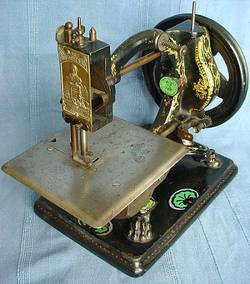 The first step, and these instructions come from the model 2608 A & B sewing machine, is to raise the presser foot to its highest level and place the spool of thread on its pin.

We must warn you though, that those manuals are in both English and German, with the latter language the dominant one.

This may be a bit of a treasure hunt for those models made prior to 1900. Since they are metal parts you made be able to find someone talented enough to fabricate a new part that will work for you. It is a guess but it has been done before.

Then the machine parts listed at this company’s website are for more recent mid-20th-century sewing machines. None were shown for antique Royal models. If you need those antique parts, you may have to scour the different antique and used shops to find one that can be used for that purpose.

Also, you can try eBay for vintage parts but nothing was really listed for Royal when we checked that auction house. This company deals in vintage parts so they may have what you are looking for or know where to find them.

Royal Sewing Machine Company, both the American and English versions, made some fairly decent sewing machines. It may be worth your while if you want to connect to the past to find some and bring them home.

At worst, they are a good collector’s item and parts machine. At best you are owning a piece of history.