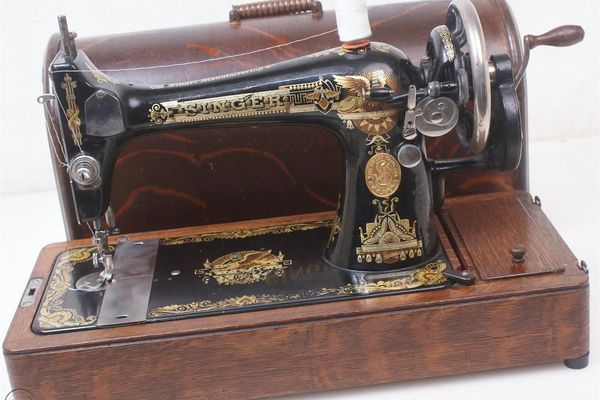 It is a well-known brand. In fact, probably more people have heard about Singer and its sewing machines than they have heard of Ford cars and trucks. Two models stand out from the huge Singer sewing machine line up and they are top quality machines still in use today. 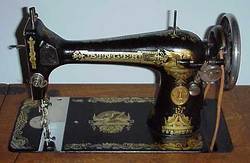 While the #27 & 28 models were first created in the 1880s, the 127 was an upgrade over the 27 and it did not get released until about 1910. If you check the chart on this website, you will see the long list of Singer sewing machine models and their release dates. There is some discrepancy on the release date of the 127, some have it in 1912.

A lot of websites talk about the #27 & #127 interchangeably as they were basically the same machine. The 127 simply strengthened previous weaknesses and performed about as well as or better than the 27.

The #27 was probably created before the 1880s but its start date seems to be lost to time but it was after 1851. That was the date I. Singer created his company. The #28 came into being about the 1880s

This will depend on who you talk to. There are different ads out there saying that the owner’s 127 is free to a good home. Then there are other ads selling their 127 for $1000 or close to that figure.

Getting to the real value is difficult as everyone has their own criteria but basic requirements are the condition of the machine, if it works or not, does it come with a cabinet and accessories, and so on.

The date of manufacture plays a role in its value plus how many were made. Unfortunately, it was a very popular model and millions were made so the best price you should pay is in the $100 to $250 range.

Broken machines only good for parts will sell for a lot less. 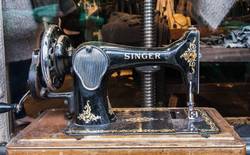 The Singer 127 was only an upgrade on their top-selling #27 sewing machine. It is listed as being put on the market in 1910 but some companies have it listed as 1912. To see all the details on this upgrade you need to click on this link. We do not use Wikipedia very often but in this case, the information is exact, specific, and very detailed.

The #127 received a new shuttle ejection system, a new location for the bobbin winder, an automatic tension release, and other upgrades. There is a problem in getting a consistent history on this machine as many records have been lost and that is partly due to WW2.

The first thing to remember about serial numbers is that they are not the same as model numbers. The location for most Singer serial numbers are on the lower back side of or underneath the machine.

If the serial number is unreadable or gone, you can still date your 127 through its model number. That number is found normally on the handwheel side of the machine or the front panel.

When you get the serial number you can contact these two sites to see when your machine was possibly made-- SingerCo.com and ISMACS.net. 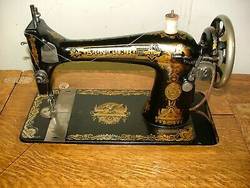 Even though it may be an old machine, the #127 sewing machine’s stitch length had variable sizes. All you had to do to lengthen the stitch length was to turn the screw to the right a short distance.

Then if you wanted to shorten the stitch length you just reversed the process and turned the screw to the left. The key to using this model, like almost every other sewing machine model, is not to set the stitch length to 0.

If you do then it is most likely that the sewing machine will not feed any fabric into the machine. One thing about the #127 and the 128 is that the only way to tell the actual stitch length was by doing a few stitches and physically looking at them. then make your adjustments. The 128 had a little knob instead of a screw to turn.

Even though it is an old sewing machine, it is still possible to find parts for the 127 sewing machine. The reason for that is because millions of these models were made. That level of production means that there are more than enough machines out there that can be used for parts.

It also means that a lot of spare parts were manufactured by Singer to repair those old sewing machines. One place to look for parts is at this link. That link has parts for a long list of Singer sewing machine models.

Another place to look is found at this link, and also at this one and finally this one. In other words, you should have no trouble finding parts for your 127 sewing machine. if you do not like shopping online, go to antique stores or sewing machine repair shops to find those replacements. 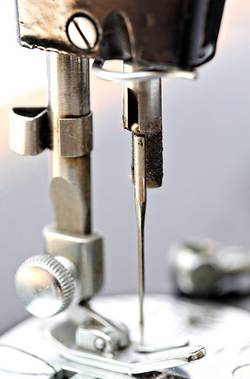 It is unsure of what the original needle size is for the 127 but you can use the 130/705H universal needle if you can’t find one that is the original size. Then the Singer universal pack- 110/18 will work as well.

Or you can try the #2045 ball point needles, the size 11 blue tip needles, and more. Check this link out to see the different needle options you have for your 127 model. If you are still in doubt, then you should check with your local sewing machine repairmen and see what they recommend.

Singers were well-built machines and they were designed to handle different sized needles even when they were made over 100 years ago. The needle you use will depend a lot on your sewing project, the material you are using, and how good you are at sewing.

Like Singer 127 sewing machine parts, this is not going to be a difficult task to perform. there are many good places where you can find manuals online for this model of machine.

One of the best locations is at this link. Here are a couple more good locations if you can’t find what you want at the first two-- #1 and #2. Although #2 may be better if you have newer Singer sewing machines.

Then it is always best to go to the company if you need hard to find sewing machine manuals. Here is the link to the Singer company which lists over 350 different manuals you can download.

All you need to do is type in the words Singer 127 sewing machine manual in the search box and you will get more results than you can search through.

Difference Between Singer 127 and The 128 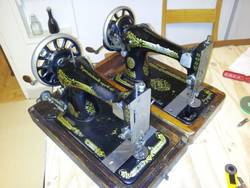 The biggest difference between these two machines is their size. They are basically very close to being the same machine with minor differences among them. Their size is what tells them apart.

Those differences between the two machines come on a long list and to see them easily, we suggest you look at this link. The problem with listing all the machines here is a lack of space and also the 127 and the 128, along with the 27 & 28 models came in various formats.

Unfortunately, if you own a 128 sewing machine model, you should not expect to get a lot of money for it. Like the 127, millions of these machines were made and that is good if you want to find spare parts and manuals but not good if you want to see value in your machine.

There are some people out there who place classified ads selling their 127 & 128 for above $650 in their ‘what are they smoking’ lists as those prices are way too high for these machines.

The value of your machine will mostly be in the sentimental category especially if it is a family heirloom. But do not expect other people to hold to the same sentimental value as you do. keep in mind the condition and if it works play a large role in the machine’s value.

One 128 with oak cabinet sold for about $100 but it was a rush sale and may have gotten a little bit more if the seller was not motivated to get rid of it. 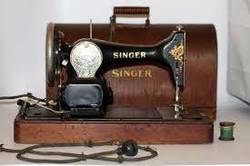 The history of the 128 is not that exciting either. It was first created in about 1912 as an upgrade to the #28. But the #28 was still; being sold at the same time and the initial changes were not that great.

Like the 127, records have been lost due to events like WW2 so constructing any history is difficult, to say the least. While there may be people claiming that the 127 and 128 were in production before 1912 you may not find many of those machines still in existence if they were made during the 1880-1912 time period that the 27 & 28 models were made.

Basically, there is no real history for these machines. They were not unique and merely upgrades on very popular and affordable sewing machines. These models also received improvements as technology and further research developed them.

We will duplicate some links here as the same people that have the 127 sewing machine manual have the 128 ones as well. Also, there are so many that came up in our research that we cannot find some of our usual options for our UK readers.

The first site to check will be at this link, with the second site to look at is found here. Other locations to try are at Singer itsel﻿﻿﻿﻿﻿﻿f, and the following links-- the first one is here. Sadly, eBay seems to only sell manuals with the machines listed on their website.

Explore those different sites as they do have manuals for the 1,2, 3, 4 & more versions of the 127 and the 128 sewing machine. If you do a concentrated search, you should find a company that sells the manuals or allows for free downloads in your country.

Where to Find a Singer 128 for Sale 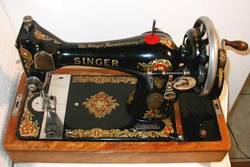 Maybe a better question would be, ‘where can’t you find a Singer 128 sewing machine for sale?’ There are two good reasons why there are a lot of places where you can find these models for sale. One, they were made by Singer and that company had a worldwide market in the 19th century. Everyone knows Singer.

Two, millions of these machines were made over the years. That means you will find them in a garage, yard, estate sells, flea markets and swap meets. Next, the classified ads, Craigslist, laundromats, meat markets, and other small stores will have ads selling the 128, etc...

The next places to check will be your local sewing machine shops, repair shops, and antique stores. You really shouldn’t have to go to the internet to find one for sale. But if you do, check eBay as they have lots of models for sale.

Next on the internet search will be online sewing machine repair shops, dealers, and parts dealers as well as online antique stores. You may find worth buying long before you exhaust your for sale options.

How to Thread a Singer 127 Sewing Machine

These instructions are for the 127-3 and the 128-3. To start, you need to turn the handwheel until the thread take-up lever is at its highest point. next, place the spool of thread in its position on the spool pin and take the thread end to the first thread guide.

The Singer 127 & 128 may not hold a lot of value anymore but that is still okay. They are good machines that were well built and some still work today. The other good news, because so many were made in those 1880 to 1960 years of production, you can find a lot of parts for those models.

You can also find a manual for them and that makes owning these two sewing machines a lot better.