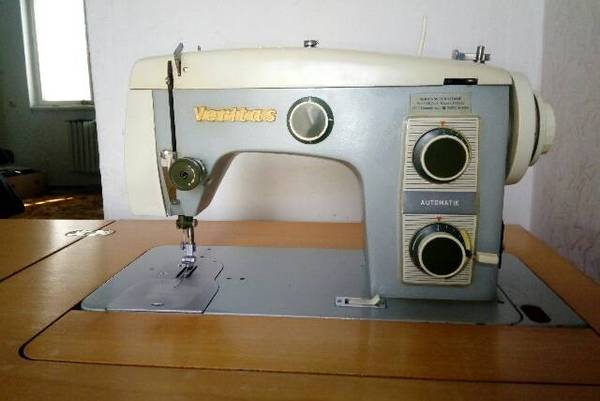 Around the world there are many interesting sewing machine stories. These machines were made by different people who all thought they could build a better model than the one they saw in another country. Sometimes they succeeded and they stay in business.

Even though the company’s website says that it started in 1894, the Veritas sewing machine actually got its start in 1855. The word Veritas means truth and that is the kind of impact the original founder of these sewing machines gave his machines when he named his devices.

To learn more about the Veritas company and sewing machine, just continue to read our article. It has the information that lays out the story for you nice and easy. It s a good read while you are enjoying your morning cup of coffee. 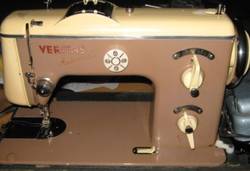 It figures that a son of a linen weaver would have an interest in sewing machines. That was the way it was for Friedrich August Clemens Müller as his interest was not in weaving the fabrics his father made but in helping people put those fabrics together in fine outfits.

The year was about 1855 when Mr. Muller brought back an American sewing machine and decided he wanted to build his own. It is not known if he simply cloned the machine or if he had some innovative ideas to improve on the design.

For the next 39 years he made these machines in a small workshop in the Schössergasse in Dresden In 1894 he finally incorporated his business in Germany using the Veritas name as his company’s name. That name remained until 1945.

That year, the factory was bombed by the Allies and the remains were dismantled and the company nationalized. 10 years later, the rights to the Veritas name was purchased by VEB Nähmaschinenwerk Wittenberge.

This company was an East German factory and its machines were very popular throughout Eastern Europe. At one point the company was making 500,000 sewing machines a year.

But this did not last past reunification in 1992 and the company was liquidated by the German Trust Agency and the rights to the name went from owner to owner until 2010 saw Bernina buy the international rights to the name.

The company is still looking to make more achievements even after 125 years. 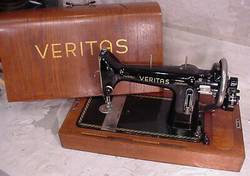 One of the reasons that the vintage Veritas sewing machine may command a high price is because it may be rare outside of Europe. There is no word on any exporting of these machines beyond the European continent thus their price is a bit high for those machines.

One 1890 model is selling for $400 on eBay while another is going for about $200. Of course, the price of the machine you are looking at in antique stores and vintage sewing machine shops will vary.

It will be influenced by the owner’s view of the value as well as the amount of time and parts he or she has put into restoring the old sewing machines. Also, the condition of the machine will influence the price somewhat, lowering it down to more economically feasible levels.

If you have good negotiating skills, you may lower the price even further. 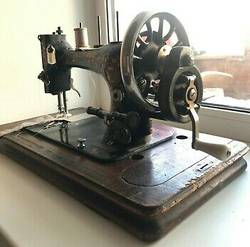 The problem with retrieving new manuals for old machines is that they may not be found in plentiful supply outside of Eastern German and Eastern Europe. But you can try the company itself and see what manuals they have in stock. Use this link to get to their manuals page.

Or you can try to find the one you want at this company’s website. It only has a few of them listed so don’t hope for too much success. Here is another option but it seems to only have one available.

The thing about retrieving a new manual is that the contents may be in German only. It is hard to say as we have come across many manuals for non-German machines written in both German and English.

You are taking your chances as the manual we are using for the threading instructions comes in two languages.

The older Veritas sewing machines were probably made from all metal parts. That gave them a lasting quality and a workhorse personality. Even though the company was producing up to 20,000 a year in the late 19th century the machines seem to look good and perform up to expectations

The modern machines come with lots of 21st-century technological upgrades that make them easy to use and meet modern-day standards for sewing. These machines are being built by Bernina, so you know the Swiss quality is there even for this smaller subsidiary.

The modern mechanical sewing machines may not have all the upgrades its computerized counterparts have but they are still good quality machines at an affordable price.

There are machines for every skill level making sure everyone in the family can learn how to sew the right way. The older 1800s models were very simple in design and easy to thread, allowing those who do not enjoy computerized technology to have fun sewing again.

Since the older machines were made by craftsmen who took pride in their work and the newer ones are made by Bernina, you can trust the quality of the machine. 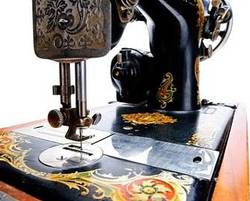 The website for the Veritas sewing machine company does not have a specific web page for parts or servicing. It is more for manuals and extending the warranty on their newer models. But it also has contact information so you can inquire about spare parts for your machine. Just click here.

Then you may search Amazon even though they do not list Veritas by the name they do have antique sewing machine parts for sale. One online arts store just lists antique parts generically but you can see what they have to offer or find your part at this link.

Finally, you can try this online parts store as it has quite a few models from vintage to more recent sewing machines. Pre 1945 models do not seem to be on the list.

The website of the Veritas does not seem to have a cart or checkout page so buying direct seems to be out of the question. You can contact them to see where a dealer is near you or if they market their sewing machines through local department stores, etc.

As we said earlier, eBay has two for sale and they are antiques as both were made before 1900. The price on these is reasonable if you are into collecting antiques. There are independent sewing machine shops that list vintage or used Veritas sewing machines and a good internet search will produce a list of those for you.

Or you can try thrift stores, estate sales, auction houses, and even vintage sewing machine shops and antique stores. Since there is no way of knowing how many were brought into America or other western countries, there is no way to tell you how many are available.

How to Thread a Veritas Sewing Machine 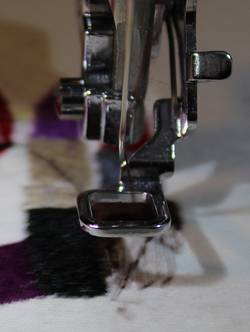 Do not use the hand wheel as that does not give you optimum threading positions. Next, place the spool in its spot with the thread coming from the front. Then pull the thread around the upper thread guide and head through the tension spring.

This company has had an interesting history, surviving dismantling, liquidation, and finally being bought by Bernina. Fortune has smiled upon Veritas as it has been in the hands of owners that like to produce quality machines.

That is what you will get when you purchase one of their old or new models. Quality to the core and a fine sewing machine.