There is some conflicting information about the Universal sewing machine. Some say it was built by Standard, others by White and still a third party said it was built by an anonymous Japanese company after the war.

Who Made Universal Sewing Machines?

It is a bit complicated to sort out all the details surrounding this model of sewing machine. The company that originally made it was called Standard Sewing Equipment but that company was owned by Singer before that time. Then Singer sold it to White before the Universal was made.

The badge on one of the machines clearly states that the machine was specifically designed and built for Standard Sewing Equipment company by another one of the many Japanese firms called Koyo Machine Industries located in Osaka, Japan.

That makes the Universal model a Japanese sewing machine made about the 1940s to 60s. Standard, at that time, was supposed to be owned by White Sewing Machine Company and they did business in the same office (according to rumors).

The Universal sewing machine is also said to be an exact copy of other models sold under the White and Domestic brand names.

To understand the Universal Sewing Machine company you would have to read the history of the White Sewing Machine Company. From all the research we could do and fin on this model name, the former company never existed and was only a faux competitor so they could have more dealers in the same area.

White owned a lot of different brand names as it was one of the few original American sewing machine companies to make it out of the 19th century and survive long after the war.

The name Universal may have been used by a variety of different sewing machine companies as it is a very attractive name that gets people’s attention. Also, the Standard company was first bought by Osaan of Japan in the year of the stock market crash, who sold it to Singer in the 30s who then sold it to white after the war.

But there is nothing definite as records have not been kept up since White disappeared in the late 20th century. It is most likely that White just used the name to make more money from people who thought they were buying a competitor’s superior machine.

There was a Universal Sewing Machines LTD company in the United Kingdom after the war. It was formed in 1954 and by 1957 it was making 35,000 machines a year. Their claim to fame was the aluminum sewing machine body but there is no word of the popularity of that model

There is also no connection between that company and the Universal sewing machines made in America after the war. Their machines seem to be copies of the Taylor-Bird machine as it used the same parts.

What can be uncovered about the American Universal sewing machine is that it was never an independent company, it was made under the ownership and supervision of White and the machines were a product of the Japanese sewing machine manufacturing boom that took place in the late 40s to early 60s.

The machines that were made seemed to have been made from all metal parts, were very durable and some older models could work like a charm after a little oiling and cleaning. 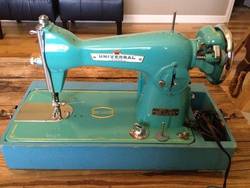 It seems that whatever company that made the Universal sewing machine made some nice models. The KZM model from about the 1970s has stood up to the test of time and it is not rare nor valuable.

That model was also sold as a Signature brand for Montgomery Ward. The Universal zig zag seemed to be a bit ahead of its time as not only did it zig-zag it also sewed in reverse and had drop dog feeds. Also, it came with a vertical bobbin and several stitch patterns.

We have been able to locate a third model called the UN50 but there is little information on this machine. It had 6 stitch patterns and another dial to it but other than it was a basic sewing machine.

The KSB model was similar to the KZM with one difference. It was built into a table so you had a stylish place to sew.

There are a few places to find a manual for some of the Universal sewing machine models. The one place we usually go to has 2 only.  You won’t be able to contact the White Company as that went out of business sometime around the late 80s when it was bought out by Viking.

One is available at this link and there is no name on it so it is hard to tell which model it is for. Then you should be able to find another one at this location under the White name or you can ask them where to find any. This is the link to that option.

Outside of antique stores, libraries, and sewing repair shops that deal in vintage sewing machines, you won’t find many options for Universal manuals. 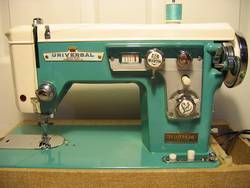 The Universal De Luxe had a serial number S89157. But that is the only information given on that identification. Standard and White are long out of business so their records are lost, probably destroyed when they were of no use to anyone.

Without those records, there is no way to tell how many units were made, which year they were made in, and other details that come with owning a sewing machine. You can try the major sewing machine company that bought White years ago, but that was a long time ago and again those records may not have been kept.

Electrolux owned the company from 1986 to 2006 when it was sold to Viking. It is always worth a shot.

How Much is a Universal Sewing Machine Worth?

We are sorry to say that they are not worth very much. Because they were basically Japanese made and clones of other more famous sewing machine models there is little to attract collectors and drive up the value.

The one we saw at eBay was selling for just over $100 and it looked in great shape. The De Luxe model was designed very well and it may hold a little more value than a regular Universal model because of its unique ornamentation and the features it held.

To put a price on it would not be wise as that value will change from collector to collector. The same can be said for the Universal De Luxe Streamliner Sewing Machine Model DST.

It came in two tones, pink and white as well as possibly other colors, and had a reverse button as well as other features that made it stand out. Unfortunately, it has that 40s to 60s Japanese look so you may get a little more than $150 for it but not much. 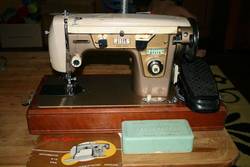 There is actually no way to know how much a Universal sewing machine with table went for either when it was new or now that it is a vintage machine. No one is listing a price for this model anywhere and we would only be guessing at the price.

The best we can tell you is to contact some local antique dealers or vintage sewing machine shops and see what they tell you. Those businesses should have books to help guide their estimates and can give you a ballpark figure on what to expect if you want to sell yours or buy one when you find it.

One of the problems you will find when looking for Universal sewing machine model parts is that your results may turn up those parts marked universal and can be placed in any sewing machine.

You may have to list your model number to find the parts you want or even a store that carries Universal models and their parts. Singer, Pfaff, and maybe other big sewing machine brands make universal parts so you really have to be specific about what you want.

Then because many sewing machine companies used the words deluxe, you may also be frustrated as those parts come up first over Universal. it took a little while but we found this store, one of our go-to parts stores we like to link to. That is because it has many parts for the small brands no longer in production.

eBay had a model MSAZ sewing machine that was selling as a parts only machine. It is gone and we haven’t seen any others listed there. Most likely, you will have to talk to vintage sewing machine repair people to get the parts or where you can find them.

It would be nice to say that we tried one and that we liked it but since there are not that many around, we can’t. But from what we have read and seen, these look like very good sewing machines that came with some great features.

They may be good to use to teach the younger generation how to so as they are not complicated like the many modern computerized versions. There have been some reports that these machines have held up over time and after long idle periods, a little oil and cleaning, the machines worked like they were brand new.

The colors are nice, and in standard Japanese tradition but what put us off a little is the confusion over who actually made and marketed those machines. It would have been nice to find out more about their history and other details.

How to Thread a Universal Sewing Machine

These instructions are for the UN50 and you can see the diagram at this link. First, raise the needle and put the thread on the spool pin. Second, take the thread through the thread guide holes and then down around the tension disk.

Universal seemed to be a very good and well-made sewing machine. It is just too bad that it was made when and where it was.