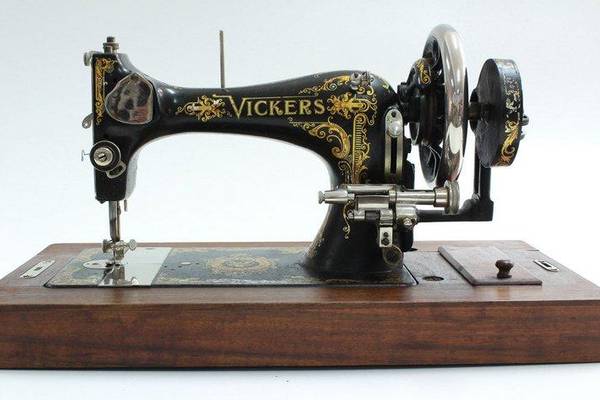 How Old Is My Vickers Sewing Machine? (History, Value, Date)

The written word is not always true. As much as one would like to believe that what is written on the internet is true, that is not always, or even mostly, the case. It seems that a lot of false information about Vickers has been published over the years making it hard to tell fact from fancy.

To learn more about the Vickers sewing machine and the company that made it just continue to read our article. It gives you the information you need to date your old Vickers and see if it is valuable or not. All it takes is a couple of minutes to catch up on the news of this old sewing machine.

When Were Vickers Sewing Machines Made?

The Vickers company was an armament manufacturer as well as making many other products. It always sought to diversify and it had its hand in numerous products throughout the years 1828 and 1914. Moving to sewing machines was not seen as an abnormal move due to the attitude of the company.

The beginning of the first World War brought an end to the production of the sewing machines and it wasn’t till after the war that the Company started making sewing machines again. They had a very good open market as one of their main competitors Frister & Rossmann slowly went out of business when the war ended.

Vickers continued to make sewing machines until their production was interrupted again but this time by the Second World War. 1939 was the last year for sewing machines at that time. Then the story takes a familiar turn after the war as sewing machine competitors were producing cheaper models than Vickers produced. It is known that they made a few machines during the late 40s and 50s.

The production is said to have stopped in 1954.

Vickers started simply in 1828 founded by Edward Vickers and his father-in-law George Naylor with the latter’s railway investments he was able to take over the company renaming it Naylor Vickers and Company. This change set a trend for name changes as Vickers has been known by many different corporate names over its lifetime.

The company was based in Sheffield England and it went public after Vickers's two sons joined the firm. The company became known as Vickers, Sons & Company in 1867. Then in 1897 Vickers bought out The Barrow Shipbuilding Company gaining access to the subsidiary Maxim Nordenfelt Guns & Ammunition Company.

They were still 17 years away from producing their first sewing machine. In 1911 the company changed names again to Vickers, Limited. This trend of changing names continued throughout the existence of the Vickers company until they were bought by Rolls Royce plc in 1999. That was the year Vickers lost its independence.

How to Date a Vickers Sewing Machine 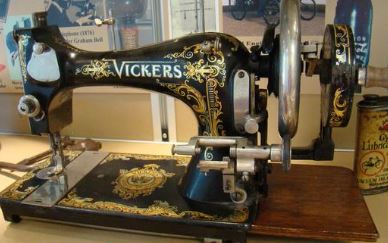 Probably the best way to date a Vickers sewing machine is by the decals it placed on its models. The first decal series were placed on the machines right after the First World War. The decal series continued throughout the years reaching 7 in total. Unfortunately, after the first decal, the dates were not released by the company or recorded by anyone.

There is a badged series of Vickers sewing machines and that badge had the name BSM or British Sewing Machine, distributed by E. Harris. You can also go by model name as the company made different models throughout its brief tenure as a sewing machine manufacturer.

The Vicker VS was the main model throughout the 7 decal series with the Modele de Luxe coming in at the third. The Vicker 7000, the 7th decal series, did not have the decal centered on it.

The third decal release used the serial number series C1-24220 and the Whiteleys Universal model had the Serial Number 84859. In the third decal series was the Vickers Modele deluxe model and its serial numbers started and ended with C1-15065.

There does not seem to be a consistent record for all the serial numbers used by Vickers. One of the reasons for that may be due to the interruptions by the two world wars and the fact that the company lost interest in making sewing machines after 1940. 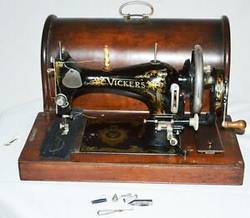 There are some good news and some bad news on this topic. The bad news is that many of the older Vickers sewing machines do not carry a lot of value. Many are on sale for under $50 and can be found at this link.

There is also one selling for under $50 so you have to check the condition of your sewing machine. If it works or not and if it comes in a cabinet or cast iron table to see if it has any value. The value will be found in how much people are willing to pay for it so set your prices a little higher than normal and be ready to negotiate.

There seems to be some demand for the old Vicker sewing machines. Not only does the place we linked to above sell many different models, but you can find them advertised throughout the internet. eBay is just one more source to find an old Vickers and the list of sellers doesn’t stop there.

You can also try the usual local places like thrift stores, antique shops as well as vintage sewing machine repair shops to see if they have any Vickers lying around collecting dust. With a little ingenuity, you may be able to turn up other sources like Craigslist, local classified ads, friends, and their families or your own relatives.

Seeing that Vickers was a British company and the sewing machines were made in Britain your best bet to find an antique would be in Britain and then in Europe. It is not known how many were shipped to North America or if they were ever popular on this continent. 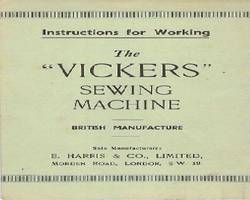 As usual, eBay had a few old manuals for sale. We didn't check to see how many in total but you may find the one you are looking for at that marketplace. Then you can try this link as it is a British company which deals in sewing machine manuals, repair, and parts.

They may be able to redirect you to other companies that may have a stockpile of old manuals they want to get rid of. The price at that particular company is 7.95 BP. If you need a manual for your Vickers 7000 sewing machine, you can get it for free by clicking here.

Also, check sewing machine repair shops as well as antique dealers, Craigslist, and other classified ads. You never know what will turn up and when they will turn up. Finally, there is this link but we are not sure if it is the same company as the other British firm we linked to. They have the same manuals except this option is cheaper.

There is a nice Vickers with a cast-iron framework and table which is still holding its value today and sells for over $300. The tables were well built and very easy to work with as one cabinet made sure you had plenty of room for your legs.

There seem to be few of these sewing machines made with tables like the one we saw with the cabinet was made for the British Sewing Machine company and distributed by E. Harris. These sewing machine models should have more value if the table is in good shape and well taken care of. 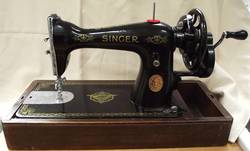 As strange as it may seem the Vickers sewing machines were not copies of the Singer models copied by other companies. There is a word that a distributor for Vickers got a hold of some design plans from Frister & Rossmann the main competitor at the time for Vickers but nothing has been confirmed on that issue.

In a head to head comparison, it may be that Vickers’ machines were better than Singers’ but that evaluation is subjective and depends on the quality of the individual machine. Your experience with the vintage machines will tip your opinion one way or the other.

How to Thread a Vickers Sewing Machine

The example for this article is for the Vickers 7000 and the diagram can be found at the link for the free 7000 manual posted earlier.

Even though it was a British sewing machine made by a company that was not an expert in sewing machines, they still seemed to produce a good tool for home sewers. The Vickers sewing machines were well built and came with a convenient design making sewing a lot easier for those people who sewed at home.

Unfortunately, the company stopped making sewing machines after the Second World War. The competition was too great and Vickers could not bring the price down to meet the competition. They did try making their machines in bright colors to help boost sales. The value of these old machines is in only specific models.