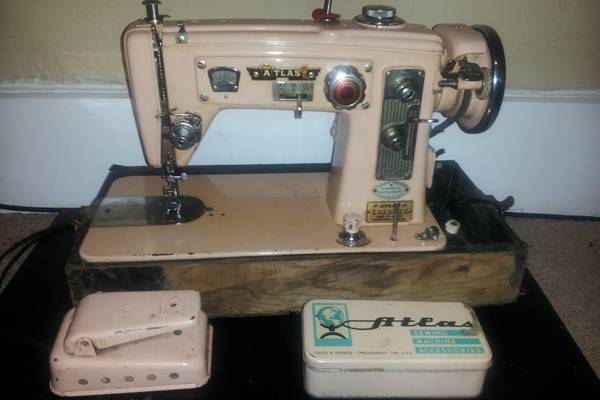 The original Atlas sewing machine company lasted for about 40 years, from 1874 to 1914, yet there is very little information on the company. Then in the 1950s and 60s, there was another Atlas sewing machine produced by Brother. Those machines were famous for their bright colors.

To learn more about both Atlas companies just continue to read out article. It searches history so you know which sewing machine is which. According to the photos it was one interesting sewing machine. 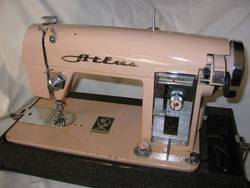 There is really little to know about the original company as the names of the owners seem lost to history. There was one advertisement that stated the company was in its 26th year of operation. Their first machine was the Atlas A which was a copy of the Elias Howe model.

Atlas produced this machine under license from Mr.Howe so there was nothing illegal about this move. Then the Atlas B was the second sewing machine but it was an import from Germany.

The owners of Atlas disguised the origination of that machine by placing the name Brunswick on their tag instead of the actual German name Braunschweig. People thought they were buying a British sewing machine and not a German one.

The Atlas B retailed for 2 British Pounds and was guaranteed for 4 years. What makes it hard to trace the history of different Atlas sewing machines is that they were sold under a variety of names even though they were the same machine.

Atlas would also import a lot of their sewing machines and place their label on them. They imported from Canada, Germany, and America to just name a few. The Atlas Countess sewing machine was actually a machine made by Canadian Richard Mott Wanzer.

It makes sense that it would as the owners may not have had anyone to take over for them if they passed on and that the company did not make its own sewing machines. There was no real heritage to make it worth continuing the company.

When Were Atlas Sewing Machines Made? 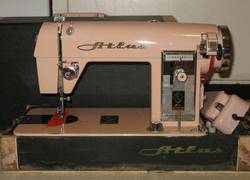 The original company was British but it didn’t seem to make its own special brand sewing machine. The company operated between 1874 and 1914 for a total of 40 years. If they were working prior to that start date or after the supposed end date it is not known.

The company could have been using a different name at either time period. Records on this company are scarce even though it had 3 locations in London at one time. Mostly the company imported different sewing machines and then slapped their tag on it.

You really can’t call them Atlas sewing machines as the company merely reproduced the designs of other inventors. But skip ahead a few decades and you will find the name Atlas on several different more modern sewing machines. That is because brother used the Atlas name to market their brightly colored sewing machines.

This business venture lasted 7 years and operated between 1955 and 1962 before filing for bankruptcy. There may have been several different sewing machines that were all the same but given different brand names and badges.

This model is said to be a clone of the Singer 15. The most famous models were the pink color and the Rocketeer or Slant O Matic. 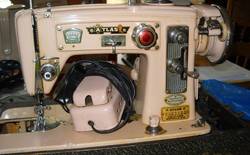 A. Natalis and Carl Grimme are two names mentioned for running the original Atlas sewing machine company but there has been no real evidence connecting those two men to that firm.

They were known to make their own sewing machines in 1870 and eventually join forces but nothing is said that teaming up created the Atlas sewing machine company. What is known is that the original Atlas was a British company that imported different sewing machines and changed the labels.

The company did nothing wrong by replacing original names with their company’s names and model i.d.s as prior to the 1890's Trade Descriptions Act the law allowed them to do that.

For the next Atlas company of the 1950s and 60s, it was backed by Brother. It was a typical Japanese knock off that helped the Japanese companies remain solvent and a competitor to the bigger American and European sewing machine companies.

The brand is not in use today. 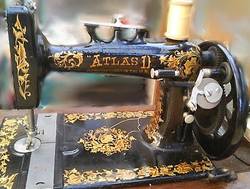 We have discussed the other two Atlas sewing machine companies that have existed in the sewing industry over the years so we should mention a 3rd. This company is like the Davis Sewing machine Company in that it has no connection to the other two now-defunct Atlas businesses.

This one is called Atlas Levy and it is based in Los Angeles Ca., and it is a new and used retailer. It works with a variety of current sewing machine companies as well as providing parts for them and other older models.

The company also stocks new and reconditioned brands that you may never have heard of. If you want to read about them you can find their information at this link. As for the other two, history has not been kind enough to preserve a lot of information about them.

But that is the way it is for some businesses. Not everyone gets to be recorded permanently and there are probably quite a few sewing machines and other companies that existed and died out before they really made it big like Singer or Bernina. 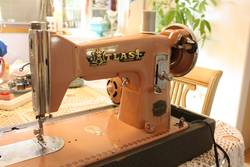 This is difficult information to get. We know of one original Atlas sewing machine serial number and it is 44328 but which model it came from and what year it was produced is unknown.

The Atlas Industrial sewing machine is not the same company as the 2 defunct sewing machine companies previously mentioned. We only saw it at eBay and that machine seems to be related to the 3rd company Atlas Levy.

Those are quite the expensive machines but may be worth it if you have a lot of sewing to do. 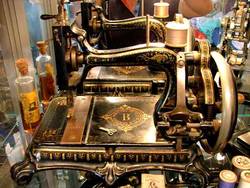 If you can find one of the better original Atlas sewing machines, it is an antique if made prior to 1900. That is good news as one model sold for 1,000 British Pounds. To get that kind of money for a model you find you better make sure it has everything it came with and in good working order.

The newer Atlas sewing machines made by Brother do not fair as well. One seller wanted $300 for her pink model. Another seller is trying to move an Atlas Deluxe but it is priced at only $100.

There are several possible antique Atlas machines on sale at eBay and their price is over $500 each. This tells you that you can get a nice fee if you are one of the lucky ones who own those types of machines.

It is hard to place a value on the Atlas models as one, they were merely copies of originals made by other inventors. Two, the later models were Japanese knock offs of the Singer 15. There is no real value in copies.

Then what you get will be what the market is willing to pay for it so you may be lucky and get a good price for your Atlas machine.

Atlas New Family, a copy of the Singer 12

And you may have better luck looking for them under their model name. A good repair shop may know where you can download one if they are still available. For the Japanese atlas, contact Brother and give them the model number and serial number of your 1950 to 62 machine and see if they can send you a copy.

How to Thread an Atlas Sewing Machine 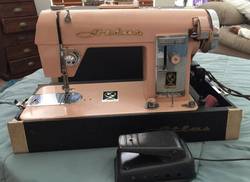 If that set of instructions doe snot work for your machine, you can try the instructions at this link. Those are for the pink Atlas sewing machine. That link provides a diagram so you can follow along and see if you are doing it correctly.

We have not found any instructions yet for the original Atlas sewing machines. There must be some around as there are still old machines being sold from time to time.

We are highlighting this machine because it was unique. Not only for its time but for all sewing machine ages. The original model was made by Grimme & Natalis Company of Germany up until the 1st World War.

This machine was sold to several sewing machine import companies including Atlas so it may be known under different names. There were 15 layers of japanning that needed to be polished before one could see the mother of pearl inlay.

That polishing took more hours than you would think. But once done it was a beautiful work of art that looked good in any home. Unfortunately, it became so expensive, the companies could not sell the machine.

This machine along with other original Atlas models are very rare today and extremely hard to find.

This may have been a disappointing trip down through history but records, especially paper ones, do not last for a very long time unless well taken care of. The Atlas sewing machine company may be a bit of a mystery that won’t be solved for some time.

At least you know that the Atlas of the 1950s is not the same as the Atlas of the late 19th and early 20th centuries. Although the concept of marketing the machines seems to be very similar.

If you can find an antique Atlas sewing machine, treasure it as it is one of the few remaining today.