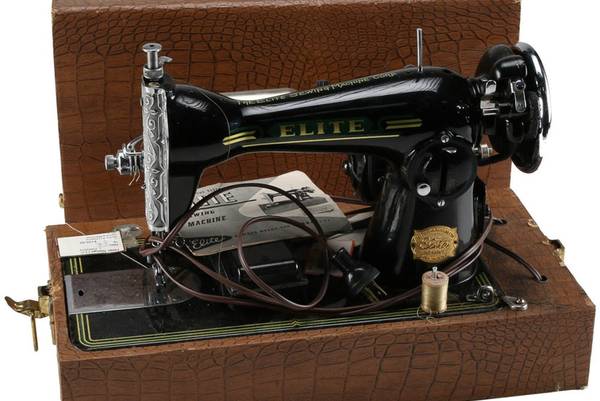 There are many vintage sewing machines. Not only from the pre World War 2 era but from the era right after the war when America was helping Japan rebuild after its devastating wartime loss. Because of this effort, the American nation is saddled with lots of unknown sewing machines.

Since World War 2 and before about 1970 there were approx. 5,000 different Japanese sewing machine manufacturing companies that produced a lot of known yet unknown sewing machines. The most copied model was a Singer class 15 sewing machine.

To learn more about the elite sewing machine company just continue to read our article. It goes in-depth so you know the history of this company and its sewing machines. They should be good vintage machines as some still work like a charm. 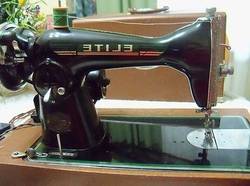 The badge on the vintage elite sewing machine company sewing machine may read Elite-only and here is an example of that machine and badge. The vintage machine should still run well even though the company may have existed in name only.

It is hard to trace the history of the different vintage sewing machine brands if they were made after world war 2 and before approx. 1970. That is because records were not kept by the Japanese companies.

The fact that one existing machine states that it was made in US-occupied Japan lends credibility to this story. The only question is which of the approx. 5000 companies that made sewing machines during that period made this one.

The Clues to The Actual Company

One owner of an Elite sewing machine stated that their serial number started with a Z and in their research found the name of a Japanese company called Aisin. Their research was quite good even though they may not have known it. Aisin and Toyota are related and Toyota started manufacturing sewing machines in 1946.

The company did not start making sewing machines with a Z serial number until 1961 according to their timeline. As you read the timeline you will see that the company did form a branch called The Elite Sewing Company until 1979.

Then in 1999, the Elite Sewing Machine company reached ISO 9002 certification. That certification stands for the International Standard of Quality Assurance for Production Processes and Systems.

A direct search for this company under that name only produced a result from Bloomberg.com and it gave very little information. All it says is that it manufactures machines and its sub-sector is industrial machines while in the industrial industry.

The Relationship Between Elite, Toyota & Aisin 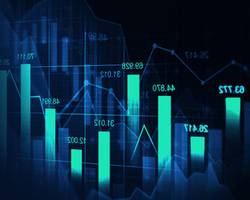 Toyota may be the parent of Aisin as it established the company in America in 1970 to give the company a solid sales foundation. It went on to establish more Aisin companies throughout the world as their operations expanded.

Toyota’s involvement in the sewing machine industry started in 1946 when the founder of Toyota, Kiichiro Toyoda, provided strict supervision over their first sewing machine the company built.

Although known as the Toyota Sewing Machine Company their products were not allowed to use the Toyota automobile symbol unless those products were of high quality. The first Toyota sewing machine, HA-1, reached that level in 1946.

So while it is hard to pinpoint the Elite Sewing Machine company it does seem to have a history that sets it apart from the other Japanese made sewing machines during the post-war era. 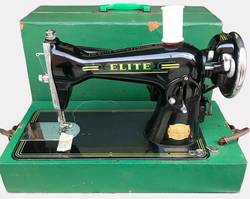 It is still possible to get working vintage Elite sewing machines. The only question would be if they were made by the actual company from 1979 on or earlier and their brand was merely a badge to meet the requirements of the American and Western consumers.

There are a few of these machines around even though they were made by the hundreds of thousands over the years. There is at least one green elite sewing machine for sale and it is linked above. Then there is a black one for sale at this link.

But you may have better luck finding this machine if you looked under the name Aisin or Toyota. That is how eBay has a couple listed. These were not expensive machines and they certainly did not have any original value when they were introduced to the world.

Being copies, they were merely a sewing machine option to help Japan get back on its feet industrially after suffering such a loss. 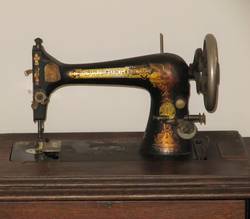 As it has already been stated, these were not sewing machines that were on the same level or class as a Bernina sewing machine. Instead, they were cheap copies of a Singer sewing machine class until the Japanese started to make their designs.

The 2 Singer designs that were used to make these earlier elite machines were the 15 and 99 classes. What this means is that these machines were not expensive to produce and were a way to get sewing machines into those households that could not afford a machine otherwise.

All of that translates into the fact that these machines have little to no resale or historical value. eBay does not list them above $40 for the one with the Toyota name on it.

The Necchi Aisin model sells for almost $90 and that is about the highest price we have seen so far. The second machine we linked to above sells for only $55 so that gives you an idea of how much yours may be worth. (That was the highest of 9 bids).

The older the machine may not raise its value due to the circumstances surrounding the Japanese manufacturing after the war.

We can only review the few models we have found on sale as this brand has not stood the test of time nor did it become very popular.

1. The Worth Point model

It looks like it is in fine condition and it is powered by a 1 amp motor that does most of the work. It as a light, presser foot, bobbin, and bobbin case but it is missing one throat plate and possibly a thread guide.

At best it may be good for historical value only.

2. Everything but the house model

The drawing power of this machine is in its carrying case. Made from fake alligator skin it gives the machine a very classy look. It looks in top condition and even seems to come with an owner’s manual so you can maintain its upkeep and keep it functioning for many years.

What is interesting to note is that the owner’s manual placed a $159.50 price tag on the machine when it was new. The motor is a 1 1/2 hp and a 1 amp model that seems to have a lot of power.

Selling for about $35 this is a more modern version of the Elite sewing machine. It comes with the Toyota brand name on one side and it has about 20 different stitch patterns included.

Its all-plastic body makes it lightweight. The badge at the back does list the Elite Sewing Machine Company’s name so you know you are getting a genuine Elite machine. The company does seem to be based in Taiwan at the time of manufacture.

Tracking down the history of different vintage sewing machines is not always easy. The Elite Sewing Machine Company is an exception to the rule as it had a definite start by a very famous automobile company.

No matter the case, the Elite Sewing Machine Company’s sewing machines did not hold their value nor their popularity. Most likely the many that were sold were traded in and junked or used for spare parts.

If you have one, it is most likely they will not gain in value but they may be a good training machine for a person starting out in their new sewing hobby.