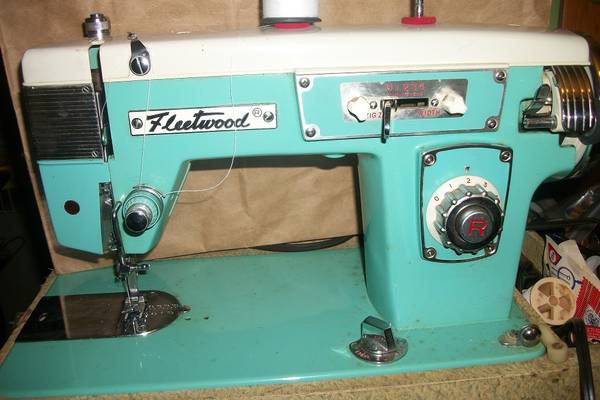 All that glitters is not gold. Sometimes it is called fool’s gold because it looks great and shines as gold does but in reality it is just a fake metal. That is the reality of many vintage sewing machines. They may work well and look good but underneath the glitter, it is all fake.

To learn what you can about this sewing machine just continue to read our article. Because there are so many knockoffs, not every vintage sewing machine is good as gold. Fleetwood is one of the disappointments. 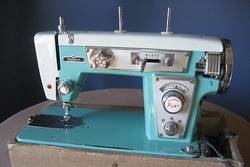 From what can be found out, the Fleetwood sewing machine was made in Japan just after the 2nd World War. America has a habit of rebuilding the nations it has fought with and there was a lot of money sent to Japan to help it rebuild its economy.

Part of that money was used to finance a lot of different companies that made sewing machines. Not knowing how to make their own at the time, The Singer model 15 was used. The funny part of this activity was that the Japanese actually made the model 15 quieter and work better than the original.

They even used Singer parts in their clones so if you have a Fleetwood you may still get parts for it. You just have to look to Singer company to find those parts. The Japanese made the Fleetwood for about 30 years between the 40s and 60s.

Somewhere during that time, the Fleetwood sewing machine received a makeover and was produced with all metal parts. That made them top sewing machines that changed the Fleetwood's reputation. They were also made in Taiwan after a while.

A lot of the early Fleetwood sewing machine models were classified as unreliable because they came with so many flaws. There was one with fins but the fins did not do anything except to give it a different look that stood out.

Some of the other flaws were the deco camshaft, plastic parts, and the need for good wiring. Once those were fixed Fleetwood produced great sewing machines with the E-188 being one of the best.

Over 40 years later it is sewing like a champ and does a great job. Besides a 5 step buttonhole feature here are some other features found on this Fleetwood model.

Ability to wind bobbins while sewing

Storage space beneath and beside machine head

It was a machine that may have been a little ahead of its time. Look to eBay to see other models with this badge name. They seem to have a few on sale there if they are still available, and you can see what one looks like. 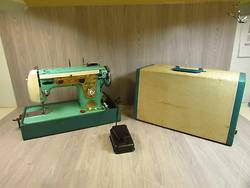 The model 767-B was a zig-zag machine with all the controls within easy reach and very convenient. You could get it in a cabinet or in a handheld carrying case. The front cover was placed on hinges making it easy to get inside and fix whatever was wrong in that area of the sewing machine.

Why the manufacturer put a top cover that almost covered the handwheel on is anyone’s guess. It made it harder to grab the wheel and spin it in the direction you wanted it to go in.

This machine was operated with a knee pedal that connected to just underneath the cabinet decking. It didn’t look like you needed to apply much pressure to the pedal to get the machine running.

As you look at the bottom of the machine with the bottom cover off, it looked like a very simple sewing machine that did not need a lot of technical know-how to fix it if anything went wrong. When folded up the cabinet looked like an ordinary hall table.

4 zig zag stitches were built into this device and the display was very easy to read and see what setting you were on.

Besides the 767-b zig-zag model Fleetwood also produced a deluxe model that was very clear in all of its displays. Those displays were so clear and large that you could read which setting you were on from across the room.

Its reputation was that this machine was a solidly built unit that was a real workhorse. When you bought it you received a carrying case that kept the dust and dirt away. That protection helped keep the machine in tip-top shape and able to function decades later without a problem.

Some of the features were the stitch length lever, the push-button reverse, automatic bobbin winder, a numbered upper thread tension, and a buttonhole option to name only a few.

One owner sewed quilts and other heavy sewing projects without worry and only needed to replace a belt when it wore out. What that tells you is that some Fleetwood sewing machines were made really well and not meant to break down.

Its an all-metal machine and the only drawback we saw was the handwheel. Still hard to grasp when sewing. 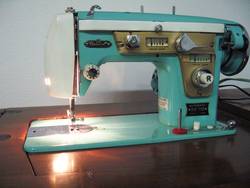 There may be serial numbers on these machines but knowing them may not do you any good. We saw one badge that did not have a serial number just a made in Japan logo and a few other words and that was about it.

But that is a minor point because no one knows what company was behind making these Japanese clones. There is no company taking credit for the machines and no company to call to get any more information about them.

Also, there are no records to search anymore and even if there were, no one would know where to start looking for those records. The age of the machines starting from this year would be between 50 to 80 years old if the sewing machines were produced in the 70s. There is no indication they were.

Even a search for Fleetwood serial numbers turned up a blank. In those early years, the Japanese companies were not keen on keeping good records. There are just too many unknowns about the Fleetwood sewing machine and the company behind it to make a real search profitable and successful.

There may be a possibility of finding a Fleetwood sewing machine manual. Believe it or not, there was one listed at Pinterest and you can look at it by following this link to its location.

Then you can try this location but there is only 1 that we found so far. The good news is that the manual will only set you back about $5. Then for the same figure but only in British Pounds, you can get 1 of 2 manuals from this company.

5 BP is not a bad price when other sewing machine manuals can cost you about $15 to $20. This search does not exclude finding Fleetwood manuals at antique shops, repair shops, and other places where vintage sewing machines are treated with care. 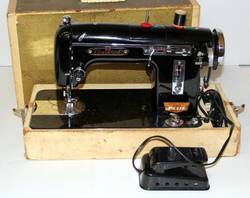 One of the good things about Japanese ingenuity is that instead of making their own parts for their Singer 15 clones, they used actual Singer parts. That means you have the possibility of using Singer parts to repair your Fleetwood and save some money.

The bobbin used for the Fleetwood was a number 15, the same size as a Singer bobbin. You will find that it is either a front or side loading bobbin on the Fleetwood. There is some good news about this.

When the company switched to making all metal parts for their Fleetwood sewing machines, they made parts that rarely wore out. That means you can still use a 60-year-old machine and not worry about it for a while. However, when they do wear out, finding the right parts may become more of a treasure hunt than a walk in the park.

On advice from one technician, it may be a smart move to find a second working Fleetwood sewing machine and use that as your parts machine. Even the foot pedal is a bit difficult to replace or fix as the parts are getting scarce.

It is also possible to make your own parts if you are good with such technical details.

How To Thread a Fleetwood Sewing Machine

One of the keys to threading your Fleetwood E-188, and that is the example we will use for this section, is to make sure to use the same type of thread in both the upper and lower thread areas.

If you use cotton thread in the upper area, you need the same type and weight in the lower area. If you do not do this then you will have tension and stitch issues that may drive you around the bend. It is possible to use different color threads if they are the same weight.

Now if you wanted an easy to thread sewing machine, the Fleetwood E-188 is the one you want. All you do is follow the thread guides through the tension dial and on down to the needle. That is all there is to it.

Threading the bobbin is just as simple. Just loop the thread from the spool through the thread guide on the bottom of the machine and take it up to the bobbin winder. Now disengage the needle and that is done by moving the handwheel clockwise 1/4 turn.

When that is done, just press the foot pedal and the bobbin winder will stop automatically when the bobbin is full. There is also the possibility of winding the bobbin while you sew.

How To use a Fleetwood Sewing Machine 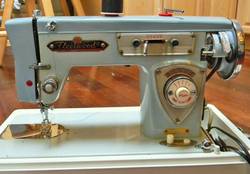 This will depend on the model of Fleetwood sewing machine you own. Some come with a foot pedal while others come with a knee pedal. Of course, the first step is to always make sure the machine is plugged in.

Double checking that will save you a lot of embarrassment if the machine doesn't turn on when you push the pedal or power button. The E-188 has limited zig-zag stitch options and the largest is about half the size modern zig-zag machines produce.

Then you can do freehand sewing or embroidery stitching on the E-188 and getting the hoop under the needle entails releasing the presser foot. Make sure to re-engage the presser foot before you start to sew.

When it comes to fabrics, the E-188 can handle a wide variety of them. Here is a short list of those fabrics you can sew on this machine:

Then here is a list of accessories that came with the E-188 when it was new:

You will know you have a good machine that is worth something when you get all those accessories when you buy the machine today.

Fleetwood history may be lost to Japanese thinking but at least it can be a good machine to sew with. Once the metal parts were put in, the company that made the Fleetwood built a superior machine.

The only regret is that the machine did not become famous.