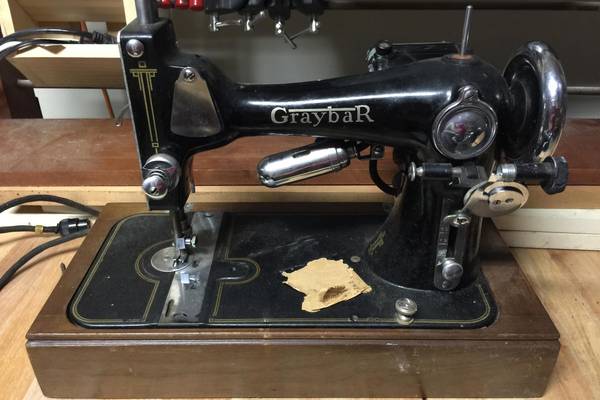 Graybar goes back a long way, to the mid 19th century but it wasn’t always known as Graybar. That name cane when the company organized in 1925 and wanted to honor the founders Mr. Gray and Mr. Barton. Today this company is the largest employee-owned in the country.

To learn more about Graybar and its sewing machine just continue to read our article. It traces the history of the company and lets you in on the value of the sewing machines bearing that company’s name.

The company started when Enos Barton and Elisha Gray became partners in 1869 in Cleveland, Ohio. It was originally formed as an electric and telegraph company. They did not start out making sewing machines.

In fact, after a 3rd partner, General Anson Stager, joined the firm as another partner on the condition the company moved to Chicago did the company really take off. But again it was not the sewing machine that saved the day.

It was the Chicago fire in 1871 that provided the needed break as the fire did not reach their location but provided the evidence needed for fire alarms. A product the three men were producing at the time.

Gray sold out in 1875 to work on his inventions and in 1876 he filed for a telephone patent a few hours after Graham Bell did. In the upcoming fight over patents and inventions, Mr. Bell won out and is credited with inventing the telephone.

This company focused on electrical supplies more than anything else. They invested in a Japanese firm called the Nippon Electric Company which was known as NEC. This help gave them a firm business footing that has served them well for almost 100 years.

The bad news for those who may like Graybar sewing machines is that Graybar never made one. While between the years of the 1920s and 1940s there are a lot of machines with the Graybar name and the name of their original company Western Electric, they were all badged machines made by the National Sewing machine company.

The good news is that those machines were built to last and many still work like a charm even 80 to 100 years after their initial production.

A 1920 model had the serial number b337675 and another serial number is 5B 817178A but getting a complete list may depend on you contacting Graybar directly and see if they still have records on the sewing machines that bore their name.

Graybar is not listed as an American sewing machine company or manufacturer in the A-Z of American Sewing Machine Manufacturers nor is Western Electric, the company’s original name. Finding complete serial number lists will be difficult, to say the least. 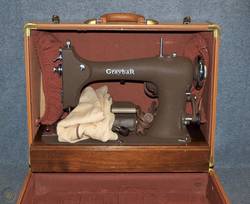 There is going to be more information on this topic than the serial numbers because there are still a few of these top sewing machines that are still working like they first did. One collector placed the value of these machines between $75 and $300.

We have seen some with cabinets being sold for the lower price on that scale privately and through Craigslist. Both the cabinet and the sewing machine look in pristine condition with the latter listing.

Unfortunately, one machine with only a nice wood carrying case sold for $20 and the condition of it is not bad but far from excellent. eBay is falling into that quoted category and that auction house has a few Graybar sewing machines but they do not sell for over $299 and one goes for only $165.

The photos show that each of the machines at eBay is in good condition. So if you have a great Graybar sewing machine make sure the cabinet is in fine shape and include the owner’s manual to make sure you get the most value for your sewing machine.

The value of these machines may not make you rich or famous for owning a rare piece of American history but it may be needed cash or a fine dinner out for you and your spouse.

We didn't find many places selling parts for these machines. But the reason for that may be that the parts may have been listed under the National’s name or another sewing machine with a different badged name.

Because the Western Electric and Graybar sewing machines were badged only, that will make finding parts a little more difficult. The company may have or may not have kept any parts lying around. It is hard to say as the time limit for keeping spare parts has definitely expired.

eBay did not list any Graybar parts even though it listed the three sewing machines with the Graybar name. Generic parts like belts may be found anywhere rubber belts are sold. That is usually made and sold by size, not the brand name.

This link has some good information on how to find antique parts. Give it a whirl as they seem to be a good starting point. 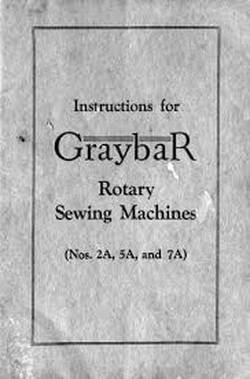 This might be a good treasure hunt as eBay only had one listed and it has sold already. The prices were $14.99 or the same prices as one of the regular manual websites we like to send you to.

One of our regular websites did not list any manuals for this company’s sewing machines. Most of the machines we saw for sale already had the manual as part of the package. We did not find too many that were without their manual.

Even a look under Western Electric did not provide us with any good results. We did find one for the National Sewing machine company but that is about it. It is hard to say what happened to all the manuals after both national went out of business and Graybar stopped selling sewing machines.

You can try to contact Graybar today and see what they say but that would be a long shot as well. So far only one has appeared after many different searches and there are only 2 images that go with it. You can see that manual at this link.

How To Thread a Graybar Sewing Machine

Graybar may not have made any sewing machines but the ones with their name son it were made to last. That is good news if you like sewing with simple to use vintage sewing machines.

Simple machines can make sewing a lot of fun and keep you in touch with real history.