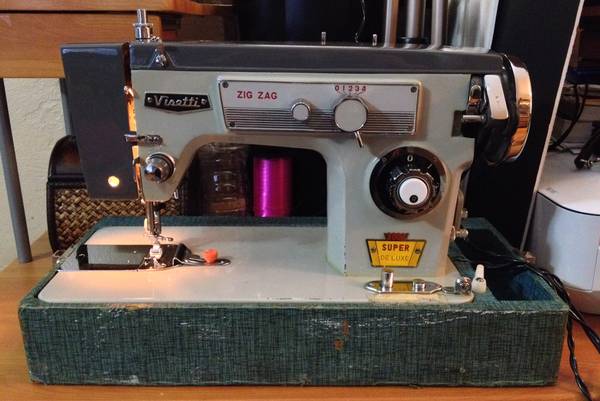 Traveling the world allows you to see that there is more to the sewing machine world than Singer, Pfaff, Viking, and Bernina. There are some great sewing machines made by lesser-known companies in different countries that deserve to be considered for purchase.

This is a case where the Visetti sewing machine is one of the many clones that the Japanese produced after the war. It is possible that the Toyota sewing machine company was responsible for this model and name.

To learn more about the Visetti sewing machine and the company behind it just continue to read our article. It gives you as much information that can be known at this time about this nice looking sewing machine. 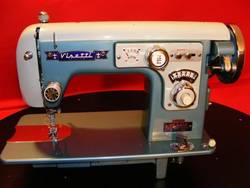 It seems that this is another Singer or other western sewing machine clone. It seems to have been made by one of the Japanese companies taking advantage of the American generosity through the Marshall plan.

There is a photo of the Visetti with a short history of Toyota underneath it so it is most likely a Japanese model made to make inroads in European and American markets. The year of manufacture would be the late 40s and throughout the 1950 s decade.

This is a very straightforward sewing machine that has a reverse and forward lever as well as simple to thread. It has a belt that drives the handwheel and helps raise and lower the needle.

The bobbin winding location is placed at the front base of the machine. Its two-tone color makes it an attractive addition to any collection even though it may be a Singer 15 clone. When it comes to that eras Japanese sewing machines you are not going to escape the Singer copying.

The simple design indicates that it is easy to operate and should do a good job for you. 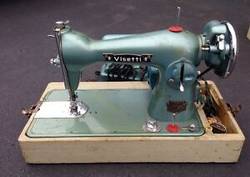 This model was also made in Japan and during the 1950s. One unit sat idle for 35 years, so they say, and when they plugged it in, the sewing machine ran smoothly as if it had been bought off the shelf.

Part of its charm was that it had settings for embroidery, silk, and normal although those settings are not explained as to the extent of their function. This machine also had a few more bells to it than the model 42 did and probably sewed through different fabrics with ease.

If you pick one up make sure to use your legs and not your back as this unit weighs almost 42 pounds.

This machine is not the same design as the super deluxe described above but that name is also attached to this model. It does not have all the same dials and features the previous one had but it still looks good for a 70-year-old machine.

Its straight forward design makes it simple to operate and thread. Also, you get a reverse and forward lever to make sure you can backstitch when you need to. Surprisingly, its value seems t be greater than other Visetti sewing machines even though it is made in Japan.

A Visetti zig-zag machine seems to be comparable in value as both models hit around the $240 mark. 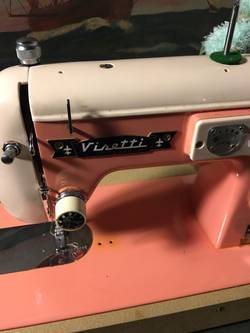 There seem to be quite a few of these machines on sale at eBay for under $100. It might be a smart idea to pick one or two up so you have spare parts on hand. That will save you some time in searching for those hard to find parts.

Then if you need super deluxe parts, check this location out. It has parts for that model on sale right now. If that doesn’t help you, then try this parts store in Britain. It lists different parts for different Visetti sewing machines at reasonable prices.

A good internet search will turn up more options closer to home and don’t forget t try your local sewing machine repairmen. This may have been a Singer 15 clone and is able to use those parts as well.

For manuals, we found only 2 places so far and both are located in Britain. Our go-to manual sources did not advertise any for Visetti and that may be because those machines are copies of Singer sewing machines and you can use those manuals to operate and fix your Visetti.

How to Thread a Visetti Sewing Machine 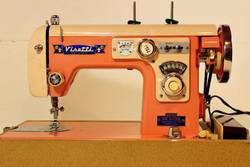 First, check the SInger 15 manual to see if that will work on your Visetti. Those post-war years sewing machines were basically Singer 15s so the threading will be similar. From what we can tell, you put the spool of thread in its place and pull the thread to the front top thread guide.

Go through the guide and down to the lower thread guide and back up to the take up lever. Put the thread through the hole right to left in that lever before going around the front tension disk. Then on down to the needle bar.

From the needle bar, take the thread to the eye of the needle and it may be right to left, but we are not sure.

The Visetti may be one of Toyota’s early creations as that company was finding its footing in the sewing machine industry. These early models provided a good foundation for other business interests Toyota had at the time and were made to appeal to western markets.

They seem to be good machines as the Japanese were known to improve on the Singer 15 design and motor noise. Their worth is not that great though.