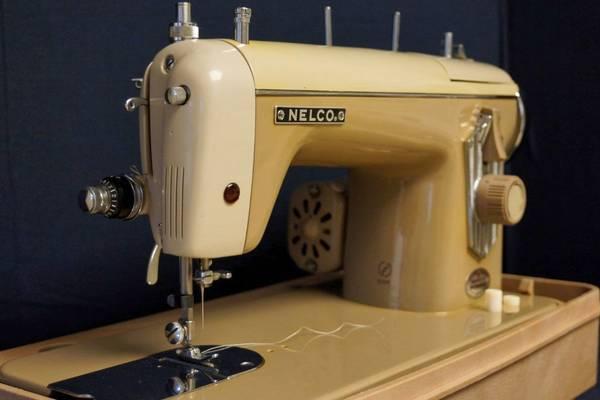 Who Made and When Were Nelco Sewing Machines Made

All is not as they seem. That is the way it is in the sewing machine world. What you think is a top brand may just be a Japanese or another Asian knock off. Getting to the true story behind the Nelco sewing machine takes time and a little effort.

When were Nelco sewing machines made? The long storied history of the Nelco involves World War 2 and a very determined man named Leon Jolson. He started the Nelco brand while working for Elna and Necchi sewing machine companies. The former was a Swiss maker and the latter an Italian one.

To get the full story on the Nelco sewing machine just continue to read our article. It is filled with facts so you understand the full history of that sewing machine and know its roots. It is a very interesting tale.

Who Made Nelco Sewing Machines?

You could say that Leon Jolson was the maker of the Nelco machine. He was behind its design and its use of Japanese engineering coupled with European ideas to create a unique low-cost sewing machine for the American market.

These machines were made so that the American sewing public had better economical options than the more expensive European ones being marketed by Jolson and other distributors.

The Japanese company Jolson worked with is not named but it had already been involved in sending Japanese sewing machines to America and manufacturing them in Japan. Copying the ideas of Elna and Necchi were not beneath Jolson and the companies did find out about his underhanded efforts and sued the man.

You can read about the man, his history and his rise to the sewing machine fame at this link. It is a compelling story of determination and dedication.

When Were Nelco Sewing Machines Made? 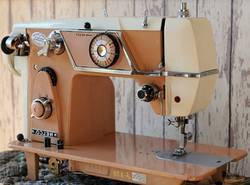 The exact day and year are not that well known. It was somewhere back in the late 1950s and possibly 1960 when Jolson and his company started production on the first Nelco sewing machine.

Due to his liberal use of the European technology that came with the two brands he was already importing to the American market, Jolson lost his distribution rights to the Elna and Necchi sewing machines.

Leon Jolson had sewing machine experience while he was living in pre-world war 2 Europe. He used to be a top sewing machine salesman for Necchi helping them establish markets throughout the continent.

Being a Jewish person he was soon locked in a concentration camp where his mechanical skills gave him a lot of freedom. This freedom was used to help Jolson escape and return to his wife.

After the war, Jolson and his wife made it to America where he was able to get government loans to help him get established. He started his business by connecting buyers and sellers of sewing machine parts and soon found that to be a lucrative business venture. But he wanted to import the top European brands.

Necchi did not reward his pre-war efforts, and it took some time to convince them to trust their former salesman with the American market. Once Jolson got two partners to help convince his old bosses that there was a market for their machines, they were granted the American distribution rights.

They also contracted with Elna and marketed that brand’s sewing machines alongside the Necchi models. This move proved fortunate as he was able to sell 10,000 Necchi’s in 2 weeks.

As the Japanese products began to be accepted in America Jolson saw an opportunity to expand his multi-million dollar company and offer a lower cost sewing machine to the American public.

While this was a successful adventure, Jolson’s fast and loose use of European technology got his company in hot water with Elna and Necchi. The company lost those distribution right, but they still had their Japanese made Nelco to fall back on.

This is what they did for decades, even though the European companies still had issues with the business practices Jolson employed. 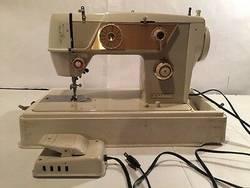 This is a very old but very tough machine. The bobbin winder is near the main driving wheel and a little finagling is needed to make sure it gets into the right position and work properly.

A 38-page operator or owner’s manual accompanies the machine and you can still access it today if you have lost or misplaced your original. All you need to do is click this link to get to where the manual is posted online.

The cost of the manual may be about $10 but the expense will be worth it in the long run. Repairing old machines is not that hard either as there are usually a lot of people who make it their life’s work to repair old sewing machines.

Is a zig-zag machine that still can perform like a champ. Its controls are all upfront with 2 knobs at the right to make sure you have the right tension and so forth. It's an easy-to-use machine that lets you change stitch styles with a simple movement of the lever.

This machine’s owner manual is 42 pages long and each page is filled with the technical details you need to know about to make sure the machine runs properly. You can click on this link to access that owner’s manual.

That link may charge you about $10 to access the contents but after paying it, you can print out a hard copy for your records. That way if anything goes wrong with the machine, you have the part numbers and some helpful tips on how to fix the problem. 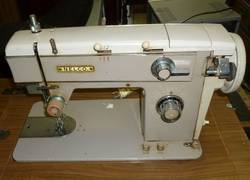 This model is another zig-zag capable sewing machine that is very heavy duty. Plus, it is very heavy as it is made out of solid parts and not lightweight modern construction materials.

Along with that, it comes with lots of built-in stitches to give you plenty of sewing options. When these older machines are found in good shape, they still run very smoothly and make sure your sewing time is not delayed at all.

A light is placed at the front of this machine so you can keep your eye on what you are doing with ease. You can find the 50-page owner’s manual at this link and it should cost you a few bucks to get it.

Once you have access to it, you can keep the manual on your computer or you can print out all 50 pages to make sure you are protected when something goes wrong.

How Much is a Nelco Sewing Machine

The cost of a Nelco sewing machine depends on where you buy it, the condition it is in and if it is a new model or a used one. On eBay you may find one for about $127 or close to that figure.

If you go to a yard or a garage sale, you may be able to get one for about $5 with a little top negotiating skill. The cost of a new Nelco A-1 machine is not totally known but it can range between $299 and a lot more money than we should print here. 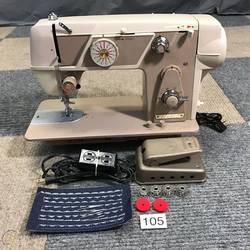 Repairing your old Nelco is not going to be that difficult. A quick internet search found that there are lots of businesses that handle old vintage machines. The search also showed that parts for the different Nelco models are still available.

Of course, if you already own one machine, you can buy another one cheaply just to have spare parts on hand when you need them. Here is one link to help get you started in your search for parts so you can use your old Nelco again

On some machines this is a difficult part to access and operate. Some locations are in unique positions on the sewing machine and make it a little difficult to maneuver correctly.

If you want to thread an old Nelco sewing machine, you should check this link out. It gives you a complete diagram of how to do the task properly.

Overall, it is a good machine that comes from a very interesting background. Most of the earlier models were well built and used top quality construction materials and parts. You can’t get the same quality these days.