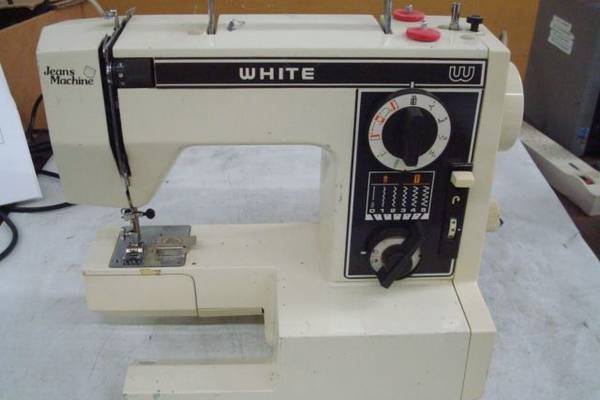 It wasn’t long after the invention of the sewing machine that the White sewing machine company came into existence. The company started in 1858 in Templeton, MA, and later moved to Cleveland, Ohio where it was incorporated in 1876.

To learn more about the history of the White sewing machine company all you have to do is spend a few moments reading our article. It tells the story of this company and why you can’t find their machines anymore.

Who Made White Sewing Machines?

It was Thomas White who founded the White Sewing machine company in1858. Only back then it was called the White manufacturing company and only changed its name when it was incorporated in 1876.

The company was family-run until about 1955 when Edward Reddig became president and started to make wholesale changes to the operation. The company used to make cars but in 1906 that manufacturing strategy was spun off and became a separate company known as the White Motor Company.

Through the years White purchased many major appliance brands like Kelvinator, Philco, Westinghouse during those years of operation change. In 1964 the company changed its name to White Consolidated Industries and in 1975 bought Frigidaire.

In 1986 Electrolux bought the White Industry and renamed its sewing machines Husqvarna Viking in 2006. That is when the White name was permanently removed from existence. 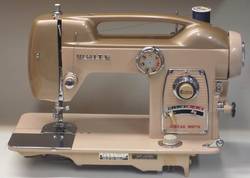 No, the company ceased to exist when it was bought out by Electrolux in 1986. When White bought Westinghouse from GM in 1975, they created the White Westinghouse brand but that brand name is not applied to their company’s sewing machine lines.

When Were White Sewing Machines Made?

The White Sewing machine had a very good run. It started being made in 1858 when the company was first created and continued through to 2006. That almost 150-year history helped produce some great sewing machines.

You may not know this but White owned and produced quite a few other sewing machines under different brand names. After losing about 40% of its business when it lost its Sears contract in the 1950s, White survived by buying competitor brands and manufacturing them under their separate brand names.

Philco, Kelvinator, Gibson, Westinghouse, and Frigidaire all became Whites without losing their identities. The lone exception was Westinghouse whose brand name was coupled with White’s and became the White-Westinghouse brand.

After the Electrolux takeover in 1986, the White brand survived another 20 years before being removed from the sewing machine manufacturing business. Probably Singer and Bernina are the only two sewing machine companies that have enjoyed a longer existence than White.

How to Date White Sewing Machine 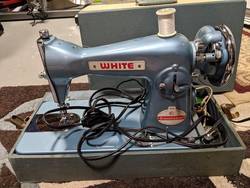 Dating the White sewing machine is not going to be that difficult once you know the procedure. But you might face some confusion as White bought out Husqvarna-Viking in the 1960s and continued to produce their machines under that additional brand.

The process is not hard as all you have to do is look on your sewing machine and find the tag that has the manufacturer’s information. That tag can be on the front of the machine, the back, the bottom or on the motor.

After you find the tag, copy down the serial number. Next, you find the Husqvarna-Viking website and click the contact us button. Tell the customer service rep you want to learn the age of your sewing machine.

2021 Update: Unfortunately, Husqvarna-Viking is not providing any age-related information. It looks like they don't have that information.

Make sure you give the rep the serial number and other personal information they may ask like zip code, phone number and so on. Give the rep a little time and they should come back with the date your machine was manufactured.

The history of the jean machine is hard to separate from the manufacture of all the other models White produced over the years. The company was producing about 60,000 models in 1882 making it difficult to find exactly when and where those machines were produced and what technological changes came about.

From the reviews, the White Jean machine remained a basic sewing machine that was supposed to handle denim easier than a regular sewing machine. They did not come with a lot of stitch varieties and a straight stitch.

Many of the reviewers found that this model of sewing machine was not the best they could get and opted to buy different brands of sewing machines that worked with heavier fabric better than the White.

While the machine sewed through layers of denim, the results were not always satisfactory and that is probably why no one has written history about that machine. Its performance did not stand out in anyone’s mind making it worth writing about.

Here is a list of model numbers that White produced over the years. It is not yet been determined if this is a complete and definitive list and some models may be missing: 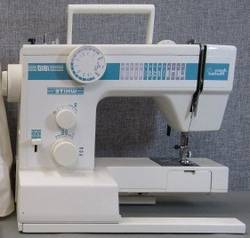 This model of a White sewing machine came with a few stitch patterns you can use but the lack of choice is one of the weaknesses this machine came with. It could do a straight stitch as well as a zig-zag option but few other stitch designs to work with.

The owner's manual is still available and it shows that this machine was very simple design with all the controls in convenient locations. You could change the stitch length some and you could also change the width of the zig-zag stitch but as far as bells and whistles go, this is a plain Jane sewing machine.

12 accessories were part of your purchase and there was a handy storage area in the extension arm. While some people were satisfied with its performance, it was not a top machine that wowed people and made them want to own one.

The serial number on your vintage White sewing machine is an important part of finding out how old it is. The location of the serial number may be in one of a variety of places and it may take a few seconds to get the exact location.

Just look on the front, back, bottom of the machine or on its motor. The machine is not that big so it won’t take long to find it. Once you get the number write it down in a more convenient spot so you have easy access to it.

Some serial numbers may be 7 numbers long and depending on their date of manufacture that number may be even smaller. To get a complete list you may have to contact Husqvarna-Viking and ask them to send you a copy. 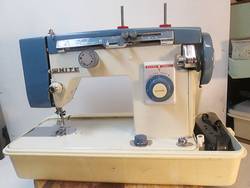 Part of the value of a White sewing machine will be in how it was originally made. If it came with a cabinet, then it would be worth a little more money than a model that came with its carrying case.

You are not going to make a lot of money off a White sewing machine unless you have a rare model in tip-top condition and still working. The bad news is that the models 1422 & 1717 are selling for less than $50. Sentimental value plays a small role in determining the actual value.

How Much is a White Rotary Sewing Machine Worth

Antique shops may have their prices marked a little higher but their value is more on the historical aspect of the machine and not the machine itself. eBay has a couple of rotary sewing machines listed and their prices range between $20 and $160.

Keep in mind that the sewing machine when accompanied by its original cabinet, you may see the price soar to $450. But every market in the country is different and the location of the seller plays a role in how high or low the price will go.

A similar machine in a different market sold for only about $155. In the end, the value is the price the market is willing to bear and pay for.

How Good are White Sewing Machines? 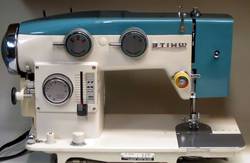 In 1858 dollars the original machines sold for $10. Over a hundred years of inflation later and that amount may not buy you a great machine today. In fact, $10 in 1858 money equals roughly $300 today so you can still afford a low-end machine today.

That conversion tells you how good the White sewing machines are except for one factor. The pre-war years saw the machines made from metal parts. That construction the White and other sewing machines of that era to be strong, long-lasting and capable of doing a lot of sewing.

Many early White sewing machines still work 100 years later. In terms of performance, it is highly doubtful that White exceeded the performance of the top machines of its day.

Their contract with Sears tells you that they were not making a lot of top quality machines but wanted every home to have one at an affordable price. The White sewing machine while dependable were not made to be super performers like Singer or Bernina.

Where Can I Buy a White Sewing Machine?

To get this list started there are some places you can go that won’t cost you a lot of money to purchase a White sewing machine. Thrift stores, estate sales, and yard sales would be your best bet for an inexpensive purchase price.

Auction houses may have a White from time to time and that option may be rare. eBay is one place and while you can’t get rich selling your vintage White through that company, you can find some cheap purchase prices if you want to add to your collection.

Antique shops are next on this list but expect to pay a higher price than some of the other options. Part of their selling price will include the money they spent restoring the sewing machine. They will also add some historical value to cover their costs and make a little profit.

Finally, newspaper classified ads, Craigslist, and similar selling outlets are a good place to find White sewing machines. Friends and family may be a good opportunity but that may be rare as well.

If you want a modern White sewing machine at a reasonable cost, all you have to do is buy a Husqvarna-Viking brand machine as that brand has been making Whites since the 1960s.

Keep in mind that the Husqvarna-Viking models are on the lower end of the quality scale.

The White Sewing Machine Company and sewing machines have had a very long and rich history. Starting in the 19th century the company made affordable machines so that every sewer could find relief from their sewing duties.

The good news is that many of those old-time machines were built with meta parts and continue to work today if you can find them. The bad news is White was not making Bernina quality sewing machines.

His machines may not perform as well as other brands and many sewers have made similar statements. A bright note is that White machines are very dependable and can get the job done even if the results are not as good as you would like.

These days you will find Whites under the Husqvarna-Viking name as the use of the brand White ended in 2006. The final chapter of White remains unwritten.