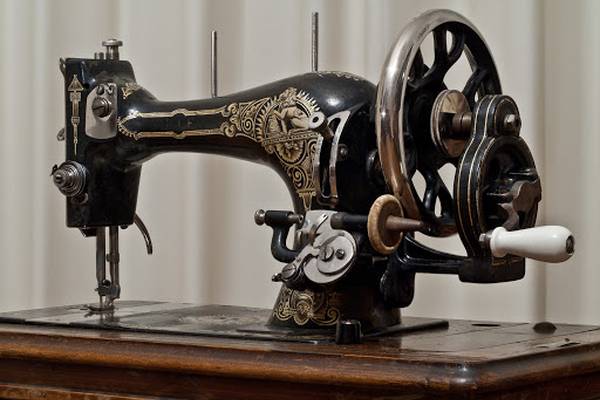 Who Made and When Was The First Sewing Machine Invented?

History is fun. You get to learn a lot about people, their inventiveness, and their struggles. The lessons you learn are very helpful in modern life as people need inspiration from those who came before in order to succeed today.

To learn more about the origin of the sewing machine, just continue to read our article. It is a fascinating story as it took many hands in different eras to create the sewing machine. Different men added upgrades through the centuries including this century

A reproduction made from his plans did not work so either there was something missing that Mr. Saint did not include in those plans or he just was not able to make his machine work.

This was the problem for many sewing machine inventors that came after Mr. Saint. Their efforts were all unsuccessful until 1830 when French tailor, Barthelemy Thimonnier produced the first working model.

The irony of this success was he was almost killed by his fellow French tailors who feared unemployment would come with his invention. The angry men did successfully burn his factory down.

Who Invented The First Sewing Machine

As you can see, history is not really clear on who was actually first. A needle that works with a machine is not exactly creating a sewing machine. Then sewing machine plans that do not produce working models should not be given a lot of credit either.

But plans do indicate invention so the credit would have to go to Thomas Saint of England for creating the plans at least for a sewing machine. The credit for a working sewing machine should go to the Frenchman who almost lost his life Barthelemy Thimonnier.

The first American sewing machine was invented by Walter Hunt in 1834.

When Was The First Sewing Machine Invented? 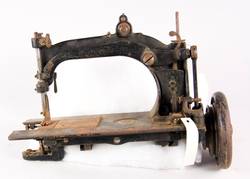 The reason for that statement is because that was when the first working model was produced. In 1810 Balthasar Krems produced a working sewing machine but it did not function that well and it is considered a failure.

The same can be said for Austrian Josef Madersperger, Thomas Stone, James Henderson and Scott John Duncan as their inventions failed even after receiving patents.

Americans John Adams Doge and John Knowles produced a sewing machine in 1818 but it failed after sewing only a little fabric.

Where Was The First Sewing Machine Made And Used?

But for a successful sewing machine, the credit should go to France in 1830 as that was the year Barthelemy Thimonnier made his single thread and hook needle device. America would probably be 2nd as 1834 saw Walter Hunt create his machine.

The problem with Mr. Hunt’s device is that he stopped working on his invention because he thought he would be blamed for unemployment. In 1848 America issued the first sewing machine patent to Elias Howe.

Why Was The First Sewing Machine Invented? 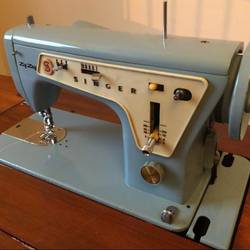 Necessity is the mother of invention. Inventors look at life and see how people are performing different tasks. Then they get some inspiration when they spot an area of life they can improve upon.

That is the reason why the sewing machine was invented. The industrial revolution provided too much demand for materials for hand sewers to keep up. Production needed to be improved in the factories and sewing machines were needed to help improve that production.

How Was The First Sewing Machine Powered?

The Thomas Saint model was designed to be powered by a hand crank. But no known models exist and a reproduction made from his plans failed to produce a working model.

Barthelemy Thimonnier’s model looks like it had a very simple foot pedal attached to a rope and that design made his machine work better than previous models. Walter Hunt’s version also used a hand crank but since he did not want to put people out of work, he did not pursue the production of his machine.

How Much Did The First Sewing Machine Cost? 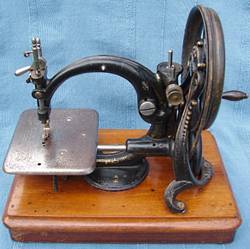 These were also high prices for sewing machines that soon became outdated as other inventors started doing upgrades on these original designs.

The one good thing about patents is that they preserve a lot of information about the original inventions. This has helped immensely when people want to make reproductions of early devices they liked.

For Thomas Saint, his plans called for a combination of wood and metal. The frame and stand were wood with the working parts made out of iron or steel. Barthelemy Thimonnier’s sewing machine also used wood and metal.

Then Walter Howe’s device used wood only for the base and metal for everything else. Isaac Singer’s first model also used the same materials. What is unique about Howe and Singer's original sewing machine is that they copied John Fisher’s design.

You do not hear about John Fisher or his sewing machine as an error in filing the patent cost him dearly including ownership of his design. 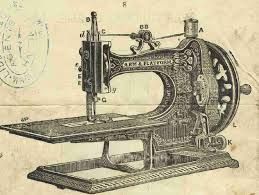 We could tell you but that might not put a very good picture in your mind. Thomas Saint’s model; was very simple in design but that simplicity may have made it hard to feed the fabric through the needle.

His model was the tabletop size and you could sit down if you wanted to use it. Barthelemy Thimonnier produced a tripod shaped stand with his sewing machine placed at the top. You had to basically stand to get your sewing work done.

Those descriptions do not do those machines justice so click on this link to see photos of their original sewing machines. There are photos of Walter Hunt’s tabletop machine, Elias Howe’s rendition, and even Isaac Singer’s first sewing machine made in 1851.

Seeing is believing and it is a lot easier to understand the concept than a few printed words on an electronic screen.

What Was The First Sewing Machine Called?

This is hard to ascertain as the records we have been able to peruse all call the early machines a sewing machine as they describe the history o this device. What the original names were should be found on the patents each inventor received.

The closest we got to an original name was 1846 when Singer produced the Bobbin Driver or Transverse Shuttle. Singer used Elias Howe’s design which started a lawsuit that Mr.Singer eventually lost and he had to pay a lump sum to Mr. Howe.

The original sewing needle patent did not describe the sewing machine that it was supposed to work with so the original name of that device is lost to history. Much information is lost for the machines invented by Thomas Stone and a James Henderson and Scott John Duncan

The original names are not as important as the fact that these men took a simple invention and continued to improve as the years past.

How Did The First Sewing Machine Work? 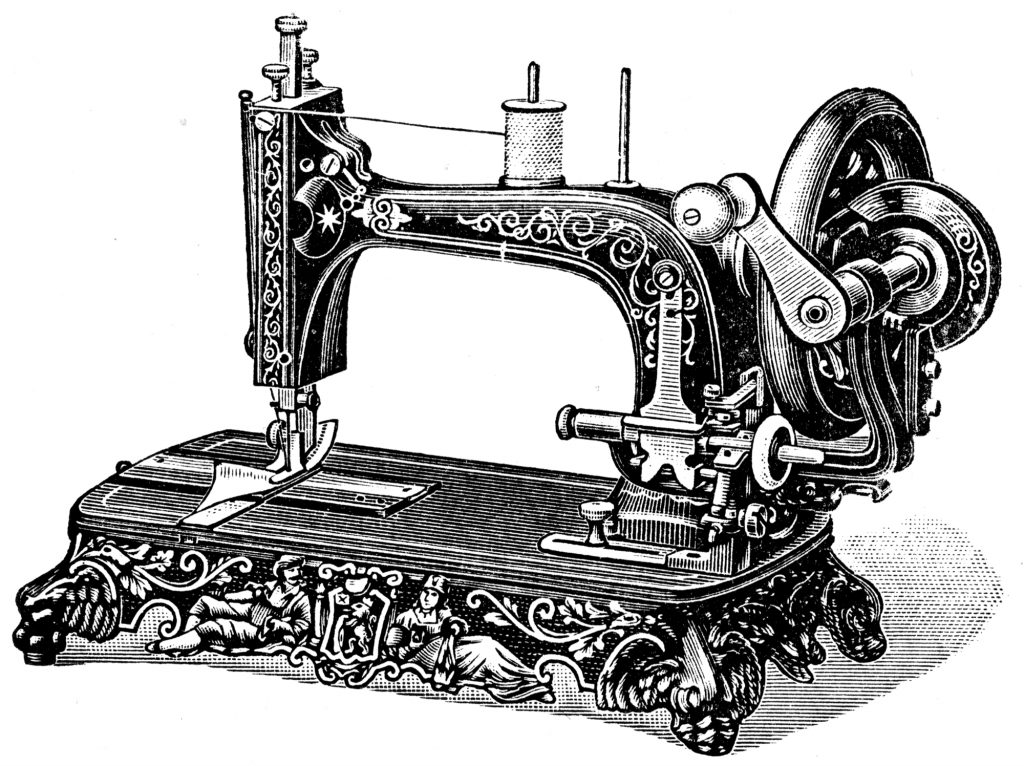 The best answer we can give is that the original sewing machines were all hand operated. Some came without feeds which made moving fabric past the needle very difficult. Even the flaws of the first operating sewing machine did not stop it from out sewing 4 to 5 hand sewers.

The first electric sewing machine was invented by the Singer Sewing Company and sold in 1889. After the First World War, these new machines started gaining popularity when homes started to get power for the first time.

The hand crank was the favorite part that early sewing machine inventors went with.

First Sewing Machine in The USA

The credit for this accolade goes to Walter Hunt who produced his hand-operated sewing machine in 1834. He never patented his device fearing it would cause widespread unemployment.

In between Hunt and Howe, there came John Greenough, and in 1843 approx., he invented the working machine that had the needle passing completely through the fabric.

Mr. Greenburgh only failed because he could not interest anyone in investing in his sewing machine. This is too bad as both Howe and Singer died after making multi-million dollar fortunes off their inventions.

There was also a lot of suing and legal work done in the 1840s as arguments arose as did patent theft during that decade. In 1856 the Sewing Machine Combination was formed by Singer, Howe, Wheeler, Wilson, and Grover and Baker.

This combination pooled their patents and made $15 per machine when other companies wanted to use those patents. This business moved lasted until 1877 when the last of the pooled patents expired.

Why Was The First Sewing Machine Important? 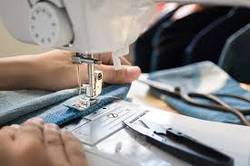 The reason the first sewing machine was important as it revolutionized the sewing machine industry. It helped to speed up production, made sewing a little bit easier, and the first machines outperformed hand sewers showing its efficiency.

But that is the common reason why any invention is important. The first machine contributed constructively to an already thriving industry and made it better. Of course, it took many men working on different upgrades to make that first sewing machine vital to the industry.

The story of the first sewing machine is very interesting. It displays the successes and failures of the different men involved in updating an industry that used hand sewers for thousands of years.

Some of those failures were do to interference by others who feared they would lose their livelihoods but that is just another lesson to be learned by the actions of earlier generations. History, even of the sewing machine, provides many necessary lessons for modern people.