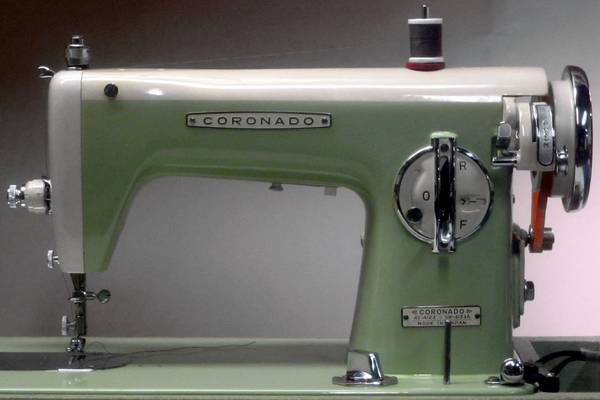 The Vintage Coronado: Who Made Coronado Sewing Machines

Knowing the machine’s history helps you decide if you are going to buy that particular sewing machine. Unfortunately, so many good brands or what seem like good brands are simply Singer’s 15-91 in disguise. You are getting a Singer and you may not know it.

To get the whole story on the Coronado sewing machine, just continue to read our article. It has the straight data so you get a clear picture of who made it and why they made it. Coronado was made to keep the sewing machines prices affordable. 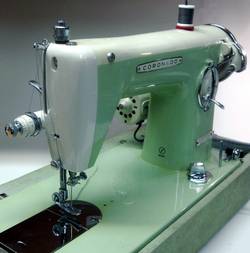 The company that originally made the Coronado sewing machine was started in the late 19th century under the name Vindex Toy Company. While it made toys, it also made sewing machines, washing machines, bicycles, and even an automobile.

Unfortunately, the competition from Japan was too stiff and the National company went out of business in 1957. It is said that the company stopped making the Coronado in 1954 and that is when the Brother sewing machine company started making them.

The Coronado is said to be a clone of the Singer 15-91 which was one of the most copied Singer models when Japanese manufacturing companies started making sewing machines.

There is no word on how long Brother made the Coronado sewing machine. It was most likely phased out in the 70s.

In our search for this brand’s manual, we were not so lucky. We were able to find one manual online as all other searches turned up nothing. If you have a sewing machine that looks like the one in the picture at this link, then you are in luck.

Another website has only two that we know of and they can be bought through the owner of this website. The person lives in the United Kingdom so expect to make payments in British Pounds.

It is possible to contact Brother and see if they still have manuals available for those old machines. National is out of the question as they went out of business almost 70 years ago and where their records are is anyone’s guess. 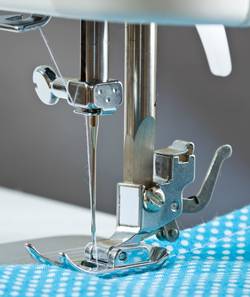 Since many of Coronado’s sewing machines were clones of Singer machines you might try comparing the parts you need to replace with their list of available parts and see if there is a match.

Or you can try and contact this guy. He is the same person that has two owner’s manuals for Coronado sewing machines. He seems to have a good selection on hand but again, you would be looking at paying in British Pounds and not American dollars.

Then you can always contact Brother and see what parts they have available for your old Coronado sewing machine.

How to Thread a Coronado Sewing Machine

If your model of Coronado is a Singer 15-91 clone you may be able to follow the instructions for that machine to thread your vintage Coronado. Or if you find instructions for any clone of the 15-91 that will help you as well. The best we can say is as follows:

Place the spool on the spool pin and pull the thread out some. Then move toward the tension mechanism watching for the thread guides as you go. If the tension dial is on the side, the thread should go between two disks.

After that, you pull the thread towards the moving arm. Now you may have to do some looping here, either around the tensioner or the thread guides. The last thread guide tells you how you are to thread the needle. 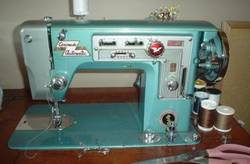 If you have the Coronado 44946 model then you own a Singer 128 clone. That was the machine used to make the copy for Coronado badged sewing machines. Depending on the year it was made, you will find that this machine came with a lot of bells and whistles for its time period.

If you are lucky you may find one with a National badge on the base or the back of the machine. That was when it was made for the National Sewing Machine Company. You may also find them with a Gamble’s bade as that was the store National made those sewing machines for.

Since this machine was made in Japan after 1954 it is possible to find the same machine wearing a variety of badges. During that time record keeping was not as much of a priority as it is today.

If you own a Coronado sewing machine you are not going to get rich off of selling it. Even if it is a garage find and in pristine condition, do not expect the machine to have or even hold a lot of value.

One person picked up a model 45-4123 for only $12. Other people are selling them between $20 and $30. You might be lucky and place yours on eBay and get a higher price for it but Coronados were not spectacular machines and you do not get a lot of money for clones.

The price is right if you only need the machine for parts. You do not want to pay a lot of money when you are going to strip the sewing machine of its working parts and place them on another sewing machine.

Where to Find a Coronado Sewing Machine Vintage for Sale 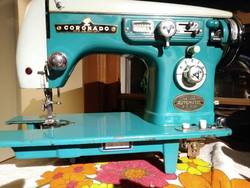 A couple of the links we have placed earlier in this article may have some Coronado sewing machines for sale. You would have to explore their website to see what they have to offer and if they are in working order.

If those contacts do not have any for sale, they may have leads on who does. Or you can make a Saturday of it and tour the different antique shops or sewing machine shops or repair centers. They may have one or two old Coronados on hand.

You can also try your luck with eBay. That auction house may have some old machines listed for sale. They tend to have a variety of vintage machines on their web pages looking for a new owner.

Then you can try the traditional auction houses. You never know what they have for sale and some times you may find one in top condition that still works. One thing is for sure, you may have to do more work in finding one for sale than the machine is actually worth.

The Early History of the Sewing Machine

The sewing machine was first invented in 1755 by Charles Weisenthal. This is interesting in and of itself as he was a German who was given a British Patent for his invention. His patent was for a sewing needle for an unknown machine.

An Englishman named Thomas Saint received the first patent for a complete sewing machine in 1790. But there is a question or two about the machine's operation. Models built from his plans did not work.

Then up to 1830 most sewing machine inventions failed. Others made machines that worked but it wasn’t until 1850 that Isaiah Singer made one that worked almost every time.

The Coronado sewing machine was American made originally. But with the Japanese invasion in industry, the cost to make the machine was too high and National went out of business. Brother then took over but their success with the Coronado is not really recorded.

The machine served its purpose in helping bring quality sewing machines to homes at an inexpensive price. It did not matter if it was a clone or not.