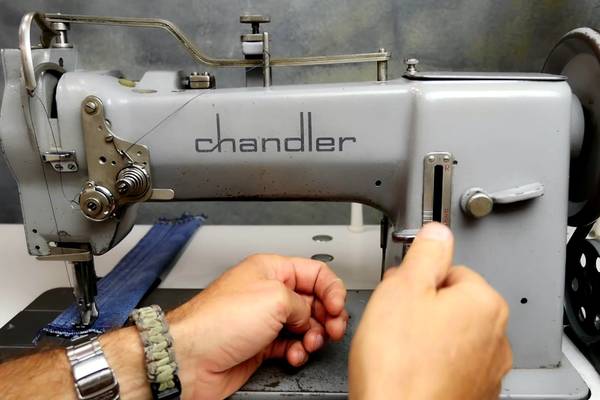 It seems that Chandler machine company which produced top-quality industrial and other sewing machines closed its doors just a few short years ago. Its old website is copyrighted to 2009 and a newspaper article says it closed in 2002. 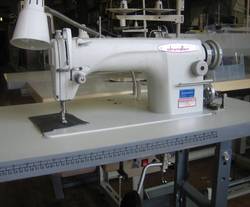 The company focused more on industrial use sewing machines instead of making them for the home sewer. Their machines were found in dry cleaners, laundries, and even the garment industry.

They actually had a couple of employees that worked for the company for almost 60 years. That says a lot about the company itself. The office staff prided itself on making quality machines through its two assembly lines.

What sewing machines they produced must have been good as the foreign competition kept copying their designs and cutting the cost. The people who ran this company didn’t just make sewing machines for businesses. They branched out and producer quite a few other devices including irons and steamers.

It is still possible to view their catalog from 2009 and see all the great machines this company produced. It was an end to an era when the Chandler machine company closed its doors for the last time.

Just over 120 years ago George J Burns opened up a machine shop just so it could produce the inventions of Daniel L. Chandler. Mr. Burns thought so much of Mr. Chandler that he took this extraordinary step.

He did it even though Mr. Chandler started his own business a few years earlier. Whatever the deal was between the two men we may not know but one thing was it started something good and which lasted over 100 years.

Throughout its production run, Chandler made hand-operated and electric sewing machines for people around the country. It started in Ayer MA but moved to New Jersey some time after the war.

At one time a German immigrant, Frank Maxant a graduate of the Krupp School of Engineering bought the company and moved to Ayer to run it. Unfortunately the 2009 website for Chandler machine co. doesn't hold too much historical information.

It just states that after 100 years the company could not continue to fight against foreign competition. At one time the company employed 80 people and their workbenches still are filled with tools waiting for those workmen to return.

This company made several different models even when it was nearing its end. The 2009 catalog is still online and you can see at least 5 different machines in the first couple of pages.

We did not check every model that was once for sale but the ones we did look at all started with the CM initials and then numbers or letters and numbers. The CM93X was an overlock machine that was made t handle heavy-duty materials.

There are 12 pages to the last catalog for Chandler machines and you can peruse what could have been by clicking on this link. Different models fit different needs and you could be sure that your work would be done when you bought a Chandler.

There were very few parts made for this machine outside of America. Essentially it was an American built machine for Americans

Just because the company is no longer in business, does it mean you can’t get the owner’s manuals for their machines. The company may be gone but there are still other companies out there specializing in sewing machine manuals that hold many of them for Chandler machines.

The first place to check would be the company that owns this website. They have lots of different Chandler sewing machine manuals that you should be able to find one that goes with your Chandler machine.

Next up is this location. It seems to have a couple of them listed under chandler but we saw a few individual web pages at the same company for different Chandler sewing machines. Look for the CM in front of the model number to get the right ones.

One was found at this location, even though their search function said there were 157 matches. Those other matches were not Chandler machines. You can always check different repair shops top see if they have manuals on hand or if they know where to find them.

A double-check at the Chandler website found 3 more manuals. Just click on the links at this website and you get a PDF file that you can look at.

How To Thread a Chandler Sewing Machine

We only have space here to give you instructions to one Chandler sewing machine. The one we have chosen to use is the CM101 and you can find the instructions as well as the easy to follow diagram at the following link. See it here

Where To Buy a Chandler Machine

If you are on the internet, the first and only place that came up was eBay. It seems that this company has some Chandler sewing machines for sale and the asking price is $500 approx. Other machines went for between $300 and $600 so they seem to be realistically priced.

If you do not want to deal through eBay, you can check the different sewing machine companies that advertise on the web as well as deal in industrial sewing machines. They should have some available or know where you might find one.

If you are into antique sewing machines, do not pass up on a Chandler made before 1900 as a few were made by Mr. Chandler himself. Just verify if you can before buying it.

It is hard to say what those early machines looked like as we found no images for them or how many were made. 1899 was when the Chandler machine company was created to sell those machines so you might get lucky and find a couple of those still in existence.

They may be American made sewing machines and solidly built but for some reason, they are not holding their value very well. For industrial machines, $975 has been the top price we have been able to locate at this time.

Other sewing machines the company produced range in value from $100 to $400. it is all going to depend on who is selling the machine and what you are willing to pay for it.

For a company that lasted for just over 100 years, there are not too many records available talking about it and its machines. That may be because the company produced industrial machines only.

There is more of an interest in those companies that produced home sewing machines than those that made them for businesses. Chandler sewing machines seem like good devices to buy.